From Liz Smith To Kevin Spacey: How The Hollywood Closet Endured 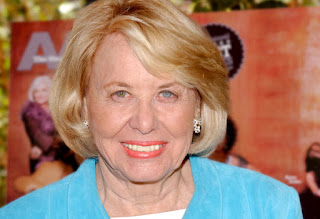 Gossip columnist Liz Smith died this week at the age of 94.  During her most powerful years, her gossip column could boost careers or trash them.  Ironically, through it all, Smith was a largely closeted lesbian with long term relationships with women.   The other irony is that Smith and others aided in maintaining the Hollywood closet and all of the harm that it wreaked on numerous lives.  Fellow LGBT blogger and activist Michelangelo Signorile has a piece in Huffington Post that looks at Smith and others who perhaps unwittingly aided in sexual harassment by closeted figures while maintaining the Hollywood and celebrity closet.  Here are excerpts:

This week’s death of 94-year-old Liz Smith, the queen of gossip columnists, brought some frank assessments of her complicated relationship with the closet, including in the New York Times, Vanity Fair and a detailed, personal piece by Michael Musto in the fashion bible, W magazine.

I wrote angry columns as an editor and columnist at OutWeek from 1989 through 1991, referenced in some of these current assessments, excoriating Smith for her role in helping to keep the queer closet in pop culture tightly closed at a time when visibility was literally a life or death issue.

As the AIDS plague escalated, Smith, in her New York Daily News column, syndicated to dozens of newspapers nationally in those days before the Internet, was helping to cover for people like Calvin Klein, Jodie Foster, Hollywood mogul David Geffen, Rolling Stone publisher Jann Wenner, Malcolm Forbes, photographer Annie Liebovitz and many, many more ― all of whom have since come out, no doubt due to the pressure and the exhaustion of keeping the closet door tightly closed.

Smith not only “respected” the closets of Hollywood celebrities and other public figures, but she also actively promoted lies and distortions, running items about false heterosexual affairs that their publicists fed her, though she knew the truth full well, since she traveled in these celebrities’ circles.

That was the epitome of Fake News, way back in 1989.   When it came to heterosexual public figures and their affairs, divorces and other romantic interests, Smith and other celebrity and political chroniclers not only had to get their details correct ― per proper journalism ― but they knew the public saw this as glamorous and exciting. Homosexuality, on the other hand, was something that revolted many in that profoundly homophobic era, so these scribes hid behind the notion of protecting “privacy” as an excuse for hiding information or outright lying.

This was of course hypocritical ― not caring about the privacy of heterosexual public figures but suddenly having more ironclad ethics when it came to the privacy of homosexuals, even when reporting on their sexual orientation was relevant to a larger, important story ― as the only thing they were protecting was often the industry that they, too, built their careers within.

And worse off, many or most of the columnists ― like Liz Smith ― were closeted and queer themselves. What better system for the powers-that-be than than to have queer people who have their own vested career and financial interests in the closet guarding the secrets of other closeted prominent and powerful people? What we’ve learned is that when celebrities feel pressured by both the LGBTQ community and the media to come out ― from Melissa Etheridge and Rosie O’Donnell to Neil Patrick Harris and Demi Lovato ― rather than being hurt they actually thrive, both personally and in their careers.

We’re also able to look back now on the dangers of the closet and protecting it at all costs with zealous anti-“outing” polices with regard to public figures, and rethink just what “outing” means. As I wrote recently regarding Kevin Spacey, protecting his closet was dangerous because some, even in the gay press, who knew of his sexual harassment of an underage actor refused to report it, wrongly equating his abuse of a male minor with being gay itself and thus afraid they were going to “out” him.

So many closeted public figures have in fact engaged in same-sex harassment and assault often because they couldn’t go out in public to bars or elsewhere and knowing they could get away with it because no one in the media would ever dare report on it.

That was the case with multimillionaire Malcolm Forbes, who was sexually harassing his male employees ― and also living a secret life dating men while people like Liz Smith, who’d been flown by him to his lavish parties on yachts around the world and in places like Morocco, perpetrated the glamorous but false notion that he was romantically involved with his platonic friend Elizabeth Taylor.

That’s not to say Smith herself didn’t do good things for charity, including in battling AIDS, raising money for the cause and promoting such events that raised funds. But the most powerful thing she could do in those times was to come out and stop closeting others, and show the visibility of queer people, and stand up to the homophobes.

Eventually she did come out as bisexual, many years later. . . . . And this year, at the age of 94, she finally admitted she should have come out sooner.

I do not mean to be unkind to Smith and others like her.  I existed in a combination of self-loathing and terror of my secret being discovered for many years in the closet.  It is not a good place to be and often blinds you to the better course of action.  Hopefully, despite the efforts of the Trump/Pence regime to re-mainstream anti-LGBT discrimination, the era of the closet is fading and fewer and fewer people will feel the need to be untrue to themselves and less than honest with others.  No one chooses to be born LGBT just as no one gets to choose to be black or born into a Muslim family.  It is far past time that ALL of us simply accept each other as creations of the Creator/god who are equal to one another, no one better than another.
Posted by Michael-in-Norfolk at Wednesday, November 15, 2017

Email ThisBlogThis!Share to TwitterShare to FacebookShare to Pinterest
Labels: closeted celebrities, coming out, gossip, Hollywood, in the closet at work, Kevin Spacey, life in the closet, Liz Smith