Coming Out for the Holidays: Family Acceptance Could Save Lives 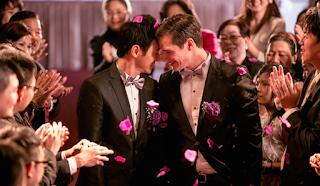 As I noted in my most recent VEER Magazine column, studies indicate gay men are significantly more likely to attempt suicide than their straight counterparts, with the numbers increasing exponentially during the holidays.  To me, the reason for this phenomenon is: (i) the family rejection many gays have experienced, (ii) alienation from the religious backgrounds in which they were raised and (iii) the forced effort to be "happy" during the holiday season.  Indeed, my holiday seasons during the first years of my "coming out" journey could be best described by two words: depression and therapy.  It took literally years of therapy to overcome the emotional and psychological damage I suffered from my Catholic upbringing.  And deep depression can lead to suicide attempts.  I survived two such attempts, both of which sent me to the hospital.  Thankfully, that was years ago and I have moved on in my life and I now find myself in a very different place emotionally and psychologically. But many in the LGBT community, especially those still in the early stages of "coming out" still find the holiday season to be challenging at best.  As a piece in USA Today notes, how families react to those coming out can literally make a difference at times between life and death.  Here are article highlight:

Holiday gatherings feel fraught for many families, but around-the-table affairs can put distinct pressures on those newly out as lesbian, gay, bisexual or transgender.

Maybe your cousin is going by different pronouns than last year. Perhaps a nephew makes first mention of a boyfriend from school. How a family reacts to such revelations can seriously impact that relative's wellbeing, said Jaime Grant, director of the LGBTQ advocacy group PFLAG.

Grant, a lesbian, was shunned by her mother when she came out in the early '80s. She missed a decade of holiday gatherings thereafter, she said, carrying a rejection that led to years of drug addiction. LGBT youth who feel highly rejected by families are three times as likely to use illegal drugs, according to 2009 research from San Francisco State University's Family Acceptance Project. They're eight times as likely to have attempted suicide.

"It’s not just a feel-good thing. It’s a life-saving thing," said Grant, now a mother herself. "One of my kids is bi, and he is coming home for Thanksgiving to talk to me about his first semester at college — new crushes, student government, the whole bit."

Here's how to best offer support should a newly out guest join your table for the holidays, according to PFLAG.

First: Thank them for opening up to you“The first thing to say is, 'I feel so honored, blessed, happy, like a treasured person in your life that you want to share this with me,'" Grant said. "And then listen." Show interest and empathy. For some, coming out is a struggle, she said. For others, it's exciting. The person may offer up preferred pronouns, or mention a previously undisclosed partner, but don't rush the process or overstep by asking prying questions, Grant said.

Set the tone for acceptance among your familyReactions from family members may vary from surprise, to gladness, to dismay. Let them know how to address this new-to-them aspect of your guest's identity and that you expect them to be treated no less than anyone else at the table, said Marsha Aizumi, a PFLAG national board member from Pasadena, Calif. If a relative's coming out announcement came at the dinner table, "I would jump up and immediately give them a hug," she said. If unkind remarks fly, call them out; the brief discomfort doesn't outweigh any potentially damaging effects.

Help relatives process the new infoWhen Aizumi's transgender son came out during the holidays, she dealt with feelings of shame, fear and doubt. Family members might need time beyond a holiday to fully process the new information, she said. You can lift some burden from a newly out family member by having a dialogue and educating family members who have questions or seem less accepting. While it's important to allow space to reflect for yourself and others, Aizumi said, make clear to the newly out relative that you still love that person. "My son needed to hear it more than ever," she said.

Own your mistakes with graceEven family members striving to be inclusive can let an unintentional pronoun slip. Opportunities for fumbles and unintentional hurt abound as family members adjust and learn more about a newly out relative's orientation or identity. Fostering grace is key for all parties. There's nothing wrong with simply owning a mistake.

Follow up after the holidayIn the days following a holiday gathering, check in with your newly out family member. Remind them you appreciated their presence. Ask them how they thought it went. Understand their journey with your family goes beyond this first holiday. Ben Hodges, the son of PFLAG President Jean Hodges, first introduced his partner to his family 21 years ago. "Remember that telling family and friends you are LGBTQ is a process," he said. "This is a healthy dialogue that will not be resolved over the holiday meal."


Sadly, far too many families do not follow this wise advice.  I was lucky and was fully accepted by my parents and siblings and aunts and uncles.  Even with such support, coming out was a difficult process.  Roughly 40% of homeless youths in America are LGBT, most having been disowned and discarded by their falsely pious parents who call themselves "Christian" or, in some cases, devout Muslims.  With three children of my own, I truly cannot fathom how anyone "Christian" can discard their own children due to the writings of ignorant, uneducated and unknown Bronze Age herders.   In memory of my parents, I endowed a scholarship fund to help graduating LGBT high school seniors who may have found themselves without parental financial support.  If you are inclined to donate to the fund, you can do so here.  The donation is tax deductible.
Posted by Michael-in-Norfolk at Wednesday, November 22, 2017