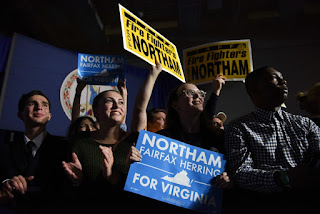 In the wake of the previous post's rant, there is encouraging news in Virginia which, if the nation is lucky, can be replicated in other states.  What is it?  Young voter turn out which helped put the Democrat statewide ticket over the top in the elections earlier this month.  Between pandering to religious extremists, racists and misogynists in general, and in pushing policies that are anathema to younger voters, the Republican Party has pretty much burned all bridges with the significant majority of younger voters.  Meanwhile, with attacks on Medicare, the same may happen with senior voters.  I truly cannot comprehend how a major political party seemingly has no long term plan to remain viable beyond the next decade at most.  A piece in the Washington Post looks at the GOP's apparent suicide pact.  Here are highlights:

As bad as the overall outcome of Virginia’s recent election was for Republicans, there was one facet of the vote that raises special alarm for the party’s future.

That’s the performance of young voters, who came out in historic numbers and overwhelmingly cast their ballots for the Democratic candidate for governor, Ralph Northam.

While Republicans have been wrestling with an aging demographic for some time, analysts say the unpopular actions of President Trump are pushing away a new generation.

Northam defeated Republican Ed Gillespie by an overall margin of 54 percent to 45 percent, as certified this week by the state Board of Elections. Young voters — who are often among the least-engaged, especially in a nonpresidential election — had a turnout rate of 34 percent, according to an analysis of exit polling by a group at the Tisch College of Civic Life at Tufts University. That’s up from 26 percent in the 2013 governor’s race and double the youth turnout in 2009. And that surge of millennials was a windfall for Democrats: Sixty-nine percent of those voters supported Northam, vs. 30 percent for Gillespie.

The same trend held when measured in different ways. In precincts adjacent to college campuses, turnout was up 8 points over 2013 and Northam won 72 percent of the vote, according to an analysis by the nonpartisan Virginia Public Access Project.

In precincts not adjacent to colleges but where voters age 40 and younger make up more than 60 percent of the population, turnout was up 7 points and Northam won more than 81 percent of the vote, the VPAP analysis found.

Virginia’s results suggest that the rise of young voters is a serious problem for Republicans nationwide.  Recent studies by the Pew Research Center found that millennials — generally defined as those age 18 to 35 in 2016 — are fast becoming the largest single bloc in the electorate. By 2020, there will be more millennial and Gen X voters than baby boomers.  And millennials have routinely polled as more left-leaning than other segments of the population.

The only other statewide election this year was in New Jersey, where Democrat Phil Murphy was a prohibitive favorite for governor. Young voters didn’t surge in New Jersey . . . . but 73 percent of them voted for the Democrat, according to the Tufts analysis.
“Young people have increasingly moved away from the Republican Party, given its perceived status as being the anti-immigrant party and not being tolerant of alternative lifestyles,” said Mark Rozell, dean of the Schar School of Policy and Government at George Mason University. . . . “As long as the Republican Party is seen as not embracing or accepting people as they are, be they gay, transgender, immigrants and the like, that’s a big turnoff to young voters these days.”
The Virginia results, he said, are “a wake-up call to the Republican Party about the way things are going to go for them next year” in congressional races across the country.  Some Republicans get the message. . . . I’ll summarize that with one word for the GOP: trouble.” . . . Ramadan has long warned that his party has a problem wooing minority voters. “But this election shows that it’s not just a minority problem, it’s a youth problem” — and even broader than that, he added.  Those problems were accelerated this year by “the Trump effect,” he said.

“Unless Republicans get back to mainstream issues instead of sanctuary cities and Confederate statues, we’re going to lose elections,” he said.

Republican pollster Gene Ulm said he was most concerned about “young suburbanites” in the Virginia results. “We basically had 300,000 people show up who don’t normally vote in a gubernatorial election,” he said. “We won 85,000 of them and lost the other 215,000.”

But the overall trend of young, white and suburban voters is a bad sign for the party going into next year’s congressional races, he said. “That affects certainly Barbara Comstock,” he said, referring to the Northern Virginia congresswoman, a Republican whose district went for Northam. “But there’s a lot of other districts in America where that’s going to play a role,” Ulm said.

There are a host of progressive and grass-roots groups aiming specifically to get a large turnout of young voters for Democratic candidates, . . . .  If anger at Donald Trump and the GOP continues to drive turnout up through the 2018 election cycle, when young people will be the largest bloc of eligible voters, we could be looking at a progressive wave powered by millennial voters.”

"Half these new delegates [in the Virginia House of Delegates] are probably millennials,” he said. “The impact of the millennial generation on the electorate is going to be pretty profound, and Democratic candidates tend to be the beneficiary of this far more than Republicans are.”

A piece in Gay Star News reveals that Virginia Republicans for the most part learned nothing from the election results as the Republican House of Delegates leadership is going out of its way to find a method to avoid referring to Delegate elect Danica Roem as female.
Posted by Michael-in-Norfolk at Saturday, November 25, 2017