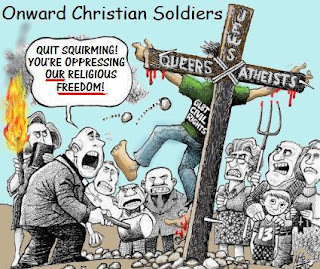 When the Founding Fathers wrote the First Amendment to the U.S. Constitution to state (i) that there would be no established church - e.g., no government sponsored/preferred church - , and (ii) freedom of religion, that had concrete things in mind.  Prior to American independence, in many of the American colonies, the Church of England was the state church which meant that EVERY taxpayer paid toward the maintenance of the Church of England and its properties and that for marriages to be legal, that had to be confirmed by the Church of England regardless of one's religious affiliation (such was the case in Virginia).   Secondly, prior to independence, one could suffer legal repercussions and civil disabilities if one did not belong to the right denomination. These are the things the Founding Fathers wanted to prevent.  Now, Christofascists are seeking to pervert this original intent and secure Christian extremists the right to ignore non-discrimination laws if the targets of their discrimination offend their "religious beliefs."  Stated another way, these extremists want special rights to discriminate against others based on the targets' religious beliefs or failure to adhere to Christofascist dogma.  It is an utter travesty.  A piece in the New York Times looks at this perverse effort and some of its proponents, including the farcically named Alliance Defending Freedom which only wants rights and freedom for Christofascists.  The Times piece fails to note that Alliance Defending Freedom is a certified hate group.  Here are article excerpts:


The details were spare when the event appeared this summer on Attorney General Jeff Sessions’s public schedule. He would speak on religious liberty to a group called Alliance Defending Freedom. No exact location was specified. No news media would be allowed in.

Only after an outcry over such secrecy — and the anti-gay rights positions of its sponsor — did a transcript of Mr. Sessions’s remarks emerge on a conservative website. “Many Americans have felt that their freedom to practice their faith has been under attack,” he told the gathering in Orange County, Calif. “The challenges our nation faces today concerning our historic First Amendment right to the ‘free exercise’ of our faith have become acute.”

Mr. Sessions’s focus was not an accident. The First Amendment has become the most powerful weapon of social conservatives fighting to limit the separation of church and state and to roll back laws on same-sex marriage and abortion rights.

Few groups have done more to advance this body of legal thinking than the Alliance Defending Freedom. It has a larger footprint than most, with more than 3,000 lawyers working on behalf of its causes around the world. And it is better financed, bringing in $51.5 million in revenue for the 2015-16 tax year, more than the American Civil Liberties Union.

[I]t hopes to carve out an even wider sphere of protected religious expression this term when the justices are to hear two more of its cases, one a challenge to a California law that requires “crisis pregnancy centers,” which are run by abortion opponents, to provide women with information on how to obtain an abortion, and another in which it represents a Colorado baker who refused to make a cake for a gay couple’s wedding.

[T]he Colorado baker’s case, which the court will hear next month, will test whether groups like the alliance can persuade the court to similarly blunt the sweep of Obergefell v. Hodges, the ruling that enshrined same-sex marriage into law, as well as the anti-discrimination laws protecting gay men and lesbians.

If there is a battle somewhere to restrict protections for gay men, lesbians or transgender people, chances are the alliance is there fighting it. . . . . It has tried to stop a Charlotte, N.C., law that gave transgender people the right to use the bathroom of their choice. It backed the failed attempt by the Arizona legislature in 2014 to allow businesses to cite religious freedom in turning away same-sex couples.

But civil liberties groups and gay rights advocates say that Alliance Defending Freedom’s arguments about religious liberty and free expression mask another motivation: a deep-seated belief that gay people are immoral and that no one should be forced to recognize them as ordinary members of society.

“They are a very powerful part of this broader movement, which is trying to bring a very particular biblical worldview into dominance at all levels of government and society,” said Peter Montgomery, a senior fellow at People for the American Way, a liberal advocacy group.
“They’ve got some very big, very clear goals,” said Mr. Montgomery, who has studied Alliance Defending Freedom since the group’s founding in 1994. . . .  One of those goals was to defend laws that criminalized gay and lesbian sexual conduct.

In a brief the alliance filed urging the Supreme Court not to overturn a Texas law that made homosexual activity illegal, its lawyers described gay men as diseased and as public health risks. The court decided 6 to 3 that the law was unconstitutional.

The United States is not the only place the group has been active. Before Belize’s highest court struck down a law last year that banned “carnal intercourse against the order of nature,” the group sent activists there to work with local lawyers who were trying to keep the prohibition in place. In India, an Alliance Defending Freedom-affiliated lawyer was part of the legal team that has defended a similar law in the country’s Supreme Court.

How the alliance is approaching the case of the Colorado baker, Jack Phillips, is an illustration of its evolving public relations strategy. Gone are the fiery denunciations of gay men and lesbians as sinners and reprobates.  A sophisticated multimedia campaign, called “Justice for Jack,” portrays Mr. Phillips as the victim of heavy-handed state bureaucrats.

Gay rights advocates acknowledge what they are up against. “They know those are messages that work better, and they are no longer leading with the messages they used to, which are ‘gay people are pedophiles and we need to keep them away from our kids,’” said James Esseks, an A.C.L.U. lawyer who focuses on gender identity and sexual orientation issues. “It’s a very intentional shift, a very strategic shift.”

Back in Washington, the alliance’s close connections with Mr. Sessions’s Justice Department seem to be deepening. In September, the department filed a brief arguing that Mr. Phillips should not be forced to violate his faith.  There is no clear line between his speech and his clients,’” it said. “He is giving effect to their message by crafting a unique product with his own two hands.”

Today the Christofascists are targeting gays.  Tomorrow it could be Muslims, non-Christians in general, and, if the strong white supremacist element prevails, racial minorities.  These efforts need to be stopped.  One way of doing this is for the larger society to begin to understand that evangelical Christians are NOT nice, decent, moral people.  They are motivated by hatred, they are self-centered, they lie incessantly in the political arena, and they seek to force their beliefs on all - just like the established church in pre-American Revolution days which the Founders sought to prevent in the new nation.
Posted by Michael-in-Norfolk at Thursday, November 23, 2017