Fox News and the Growing Ugliness of Evangelical Christianity 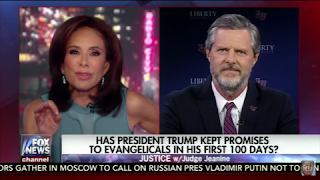 Two pieces look at the growing ugliness of Evangelical Christianity. One is a column at NBC News by a Christian author and the other is in the New York Times.  Both in their own way point a finger at one of the causes of the seemingly mushrooming hate and hypocrisy that define evangelical Christianity in America.  Both also note evangelical support of Roy Moore a symptom of the malignancy evangelicals have become in the political area where the gospel's social directives have been thrown on the trash heap despite the feigned piety and religiosity of far too many evangelicals.  The NBC News column states in part as follows:

This is not Christianity. Rather, it is an extreme Republican religionism that stands by party and regressive policy no matter what. It's not the gospel of Christ, but a gospel of greed. It is the religion of racism and lies, not the religion of redemption and love.

[E]ven before these allegations [of Moore's sexual assaults] made national headlines, it was clear that Moore’s policy agenda endangered the children of Alabama and this nation. This man, who wants to be Alabama’s next Senator, wants to repeal Obamacare, making it health care inaccessible for millions, in Alabama and elsewhere. He has said Islam is a "false religion" homosexual conduct "should be illegal." and curtail equal protection under the law for gay and transgender people. Moore supports a tax plan that would hurt the poor and working poor.

In short, Moore’s political agenda presents a credible threat to millions of vulnerable people in America. Yet Moore claims to be the moral and Christian candidate, using religion as U.S. slave masters did before him to justify actions which fly in the face of Christ's teachings. Like segregationists, Moore imagines the struggle for equality in America as a story of loss. At a revival meeting earlier this week, Moore complained that he was being persecuted. He also lamented the fact that the courts took prayer out of schools in 1962 and made a cryptic and confusing reference to “new rights” created in 1965, the year the Voting Rights Act was signed. Some members of the congregation responded, “Amen!”

As well as he knows his Bible, Roy Moore never quotes from the more than 2,000 verses that exhort us to care for the poor, the sick, and the stranger in our midst. He has apparently overlooked the prophet Isaiah, who said to men like Moore in his own day: “Doom to you who legislate evil, who make laws that make victims — laws that make misery for the poor, that rob the destitute of their dignity, exploiting defenseless widows, taking advantage of homeless children” (Is.10:1-4).

So who is preaching this Republican religionism that the author condemns?  Fox News, Breitbart, Rush Limbaugh and a host of other right wing "news" outlets. To watch Fox News is to witness an alternate reality that has no regard for those who do not worship at the Republican/Christofascist altar. The column in the New York Times does so far as to describe Fox News viewing as the new form of worship for many evangelicals.  Here are excerpts:

Kaitlyn Schiess has a sterling evangelical pedigree. She grew up in evangelical churches in Colorado and Virginia and graduated from Liberty University before entering Dallas Theological Seminary last year to prepare for a career in the church. But lately she has been frustrated by evangelicals’ failure to challenge the prejudice and predation in their midst.

To Ms. Schiess, this [evangelicals' defense of Roy Moore] is one more sign that a new ritual has superseded Sunday worship and weeknight Bible studies: a profane devotional practice, with immense power to shape evangelicals’ beliefs. This “liturgy” is the nightly consumption of conservative cable news. Liberals love to complain about conservatives’ steady diet of misinformation through partisan media, but Ms. Schiess’s complaint is more profound: Sean Hannity and Tucker Carlson aren’t just purveyors of distorted news, but high priests of a false religion.

“The reason Fox News is so formative is that it’s this repetitive, almost ritualistic thing that people do every night,” Ms. Schiess told me. “It forms in them particular fears and desires, an idea of America. This is convincing on a less than logical level, and the church is not communicating to them in that same way.”

Social scientists have documented our tendency to reject reliable evidence if it challenges our beliefs. Hours of tearful victims’ testimony will not deter evangelicals who see Roy Moore as the latest Christian martyr persecuted by the liberal establishment. “Their loyalties are much more strongly formed by conservative media than their churches,” Ms. Schiess said.
[T]he church is not doing its job. Humans thrive on ritual and collective acts of devotion. And the way we worship has political consequences. It shapes our response to evil and our reaction to people different from ourselves.
Some evangelicals have grown so frustrated with their tradition’s captivity to a particular brand of politics — and the idolatries of white supremacy and the free market — that they have proposed a radical withdrawal from both Moral Majority-style activism and modern consumer culture. Worship, after all, is not just something that happens in church.
When the Rev. Dr. Martin Luther King Jr. observed that 11 o’clock on a Sunday morning is the most segregated hour in America, he was acknowledging the special power that ritual and community have to stoke or weaken both love and hatred. There is no substitute for sharing the bread and wine — the climax of the Christian liturgy — with people unlike yourself, Ms. Schiess said. She called for fighting false idols with right worship: “Fox News forms a fear, a caricature of other people; if communion were done in churches with diverse populations, it would counteract that fear.”
[W]orship should be an act of humility, not hubris. It should be a discomfiting experience, not a doubling down on what’s easy and familiar. The battle for the soul of evangelicalism, the struggle to disentangle it from white supremacy, from misogyny — and from the instinct to defend politicians like Roy Moore — demands sound arguments grounded in evidence.

I for one think that Christianity is moribund in America and that evangelicals and fundamentalists will be the factions of Christianity that kill it in the eyes of decent, moral people who perhaps unwittingly follow the gospel message more consistently than most Christians, especially evangelicals.
Posted by Michael-in-Norfolk at Sunday, November 19, 2017