Why Do Weinstein, Rose and Moore Deserve Banishment, But Not Donald Trump? 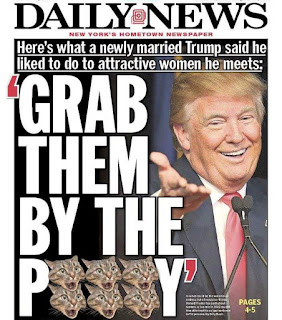 Perhaps it is because I have two daughters and three granddaughters but I find it outrageous - as well as disgusting - that while many men now find themselves without jobs and subject to a state akin to being a societal outcast, Der Trumpenführer, who is on tape boasting of his sexual harassment of women, is not facing similar consequences for his misdeeds.  To make matters worse, evangelical Christians, the very same element of society that wants to police everyone else's bedrooms and sexual activities, continue to support a man who has demonstrated that he is amoral at best.  To me, this state of affairs reveals the utter moral bankruptcy of today's evangelicals as well as that of the Republican Party.  A column in the Washington Post asks the question that every moral and decent person who values the women in their life should be asking.  It also makes the case that Trump needs to face consequences for his self-professed foul behavior.  Here are column highlights:

Let’s stipulate that all alleged cases of sexual harassment are not the same. Kevin Spacey is alleged to have sexually assaulted male minors. Glenn Thrush of the New York Times allegedly made unwelcome passes at adult women. These are not in the same moral universe. Likewise, we can acknowledge that crude behavior, including an unwanted kiss and alleged groping of women, as Sen. Al Franken (D-Minn.) is accused of, are unacceptable and obnoxious. Still, a 30-something district attorney allegedly preying on teenage girls is in another category. Harvey Weinstein is accused of rape and other sexual abuses as he wielded his power to make and break careers of vulnerable women. President Trump is accused of groping and forcibly kissing women over a period of time — which one could say is less heinous than Weinstein but worse than Franken (as the facts are now known).

And, then there’s Charlie Rose. The Post now reports: PBS said Tuesday it was parting ways with Charlie Rose and CBS announced it fired the 75-year-old broadcaster for “extremely disturbing and intolerable behavior” following an extensive Washington Post report that detailed his alleged unwanted sexual advances toward women.
The severity of the offense(s) and the need to protect the integrity of institutions (the press, the Congress, the presidency) should warrant permanent banishment for repeated actions of unwelcome physical conduct, even as we understand morally that some actions are worse than others. Congress is entitled to and should have a higher standard than Hollywood or even a run-of-the-mill workplace where an offending employee might be docked pay, demoted or suspended rather than dismissed. We still hold out hope that the White House should be held to at least that standard.

We should in other words have a zero tolerance for any sexual harassment or abuse but a graduated scale for doling out punishment. So far in Hollywood and the media, the accused generally have paid a steep price, in some cases suffering a career-ending moment when the accumulated accusations are too gross and too credible to ignore.

Inside the Beltway the precedent has yet to be set in stone.  . . . . . Moreover, we have an unknown number of cases settled with taxpayer money in which the identities of the accused are unknown. Lawmakers would be wise to set a zero-tolerance standard to which they hold members of both parties. While they may choose to spare some the equivalent of the political-career death penalty, no decent public servant should welcome someone of Moore’s ilk into office or disregard Trump’s complainants. As to the latter, is it unreasonable to demand an independent investigation in advance of the 2020 election — if Trump is still in office? Trump’s opponents should do so and remind voters that it is not too late to establish or reestablish a standard for the presidency.

Decent Americans should not avert their eyes from the harm perpetrated on multiple women over decades. Alabama will send an important message, but unless politicians start self-policing and demonstrating greater transparency, the voters in 2018 may decide to throw the whole lot of them out of office.

The complete moral ruin of the GOP is now evident to all who care to see. It seems, contrary to Kellyanne Conway’s previous statement, that the GOP officials will trade a child — many children and women, too — for a vote on the tax bill. Decent Americans will have to reject this mentality on Dec. 12 and in a series of elections and primaries over the next three years.

Posted by Michael-in-Norfolk at Wednesday, November 22, 2017