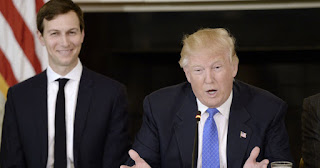 As a previous post noted, Jared Kushner has been called out by the  bipartisan leadership of the Senate Judiciary Committee for failing to turn over numerous emails between himself and Wikileaks and Russian contacts. Obviously, if the Senate Committee is aware of Kushner's  attempts to hide information, it is a safe bet that Robert Mueller and his team are likewise on the trail.  This, combined with Kushner's failure to disclose foreign contacts,  add to the overall impression that Trump et al, are lying and seeking to cover up information.  Basically, obstructing justice.  Further adding to Kushner's angst is the fact that he has been removed from many of his assignments at the White House even as he may be facing the bankruptcy of one of his company's properties in New York City.  A piece in Vanity Fair looks at Jared Kushner's situation.  Here are highlights:

When Donald Trump appointed John Kelly as chief of staff in July, the four-star Marine general arrived with a mandate to bring order to a freewheeling West Wing. . . . The aide who has ceded the most influence in the Kelly era, these people said, is Trump’s son-in-law, Jared Kushner. “Kelly has clipped his wings,” one high-level Republican in frequent contact with the White House told me.

It’s perhaps hard to remember now, but it wasn’t long ago when Trump handed Kushner a comically broad portfolio that included plans to reinvent government, reform the V.A., end the opioid epidemic, run point on China, and solve Middle East peace. But since his appointment, according to sources, Kelly has tried to shrink Kushner’s responsibilities to focus primarily on the Israeli-Palestinian conflict. And even that brief appears to be creating tensions between Kushner and Kelly.

Where this all leaves Kushner in Trump’s ever-changing orbit is a topic that’s being discussed by Republicans close to the White House.

As Kushner’s Russia troubles mount—last Friday the Senate disclosed that he had not turned over e-mails about WikiLeaks, a claim his attorney, Abbe Lowell, denied—insiders are again speculating, as my colleague Emily Jane Fox reported last month, about how long Kushner and Ivanka Trump will remain in Washington. Despite Kushner’s efforts to project confidence about Robert Mueller’s probe, he expressed worry after the indictments of Paul Manafort and Rick Gates about how far the investigation could go. “Do you think they’ll get the president?” Kushner asked a friend, according to a person briefed on the conversation.

According to two Republicans who have spoken with Trump, the president has also been frustrated with Kushner’s political advice, including his encouragement to back losing Alabama G.O.P. candidate Luther Strange and to fire F.B.I. Director James Comey, which Kushner denies. (For what it’s worth, Kushner’s choice of Strange prevented Trump from the embarrassment of inadvertently supporting Roy Moore.) Trump, according to three people who’ve spoken to him, has advocated for Jared and Ivanka to return to New York in part because they are being damaged by negative press.

“He keeps pressuring them to go,” one source close to Kushner told me. But as bad as the Russia investigation may be, it’s not clear a New York homecoming would be much better for Kushner, given that his family’s debt-ridden office tower at 666 Fifth Avenue could be headed for bankruptcy.

Adding to the travails of the Trump/Pence regime is another Vanity Fair story that looks at what really happened during Trump's meeting with Russian Ambassador at the White House and the possible consequences:

In the secretive corridors of the American espionage community, the Israeli mission was praised by knowledgeable officials as a casebook example of a valued ally’s hard-won field intelligence being put to good, arguably even lifesaving, use.

Yet this triumph would be overshadowed by an astonishing conversation in the Oval Office in May, when an intemperate President Trump revealed details about the classified mission to Russia’s foreign minister, Sergey V. Lavrov, and Sergey I. Kislyak, then Russia’s ambassador to the U.S. Along with the tempest of far-reaching geopolitical consequences that raged as a result of the president’s disclosure, fresh blood was spilled in his long-running combative relationship with the nation’s clandestine services. Israel—as well as America’s other allies—would rethink its willingness to share raw intelligence, and pretty much the entire Free World was left shaking its collective head in bewilderment as it wondered, not for the first time, what was going on with Trump and Russia. (In fact, Trump’s disturbing choice to hand over highly sensitive intelligence to the Russians is now a focus of special counsel Robert Mueller’s investigation into Trump’s relationship with Russia, both before and after the election.)

Trump seemed not to notice, or feel restrained by, the unfortunate timing of his conversation with Russian officials who were quite possibly co-conspirators in a plot to undermine the U.S. electoral process. Instead, full of a chummy candor, the president turned to his Russian guests and blithely acknowledged the elephant lurking in the room. “I just fired the head of the F.B.I.,” he said, according to a record of the meeting shared with The New York Times. “He was crazy, a real nut job.” With the sort of gruff pragmatism a Mafia don would use to justify the necessity of a hit, he further explained, “I faced great pressure because of Russia. That’s taken off.” Yet that was only the morning’s perplexing prelude. What had been an unseemly conversation between the president and two high-ranking Russian officials soon turned into something more dangerous.

“I get great intel,” the president suddenly boasted, as prideful as if he were bragging about the amenities at one of his company’s hotels. “I have people brief me on great intel every day.”  He quickly went on to share with representatives of a foreign adversary not only the broad outlines of the plot to turn laptop computers into airborne bombs but also at least one highly classified operational detail—the sort of sensitive, locked-in-the-vault intel that was not shared with even Congress or friendly governments.

So why? Why did a president who has time after volatile time railed against leakers, who has attacked Hillary Clinton for playing fast and loose with classified information, cozy up to a couple of Russian bigwigs in the Oval Office and breezily offer government secrets?

Any answer is at best conjecture. Yet in the search for an important truth, consider these hypotheses, each of which has its own supporters among past and current members of the U.S. intelligence community. . . . . there is also a more sinister way to connect all the dots. There are some petulant voices in official Washington who insist that the president’s treachery was deliberate, part of his longtime collaboration with the Russians. It is a true believer’s orthodoxy, one which predicts that the meeting will wind up being one more damning count in an indictment that Robert Mueller, the special counsel, will ultimately nail to the White House door.

“Trump betrayed us,” said a senior Israeli military official bluntly, his voice stern with reproach. “And if we can’t trust him, then we’re going to have to do what is necessary on our own if our back is up against the wall with Iran.” Yet while appalled governments are now forced to rethink their tactics in future dealings with a wayward president, there is also the dismaying possibility that a more tangible, and more lethal, consequence has already occurred.

What, then, was the fate of Israel’s agent in Syria? Was the operative exfiltrated to safety? Has he gone to ground in enemy territory? Or was he hunted down and killed? One former Mossad officer with knowledge of the operation and its aftermath will not say. Except to add pointedly, “Whatever happened to him, it’s a hell of price to pay for a president’s mistake.”


Personally, I agree with the Israelis - Trump betrayed them.  As to why, count me as one of the "true believers" noted in the article.

Posted by Michael-in-Norfolk at Thursday, November 23, 2017