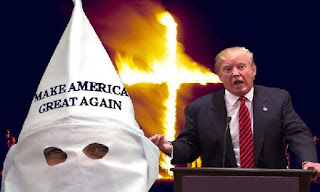 Since November 9, 2016, I know that I have felt more stress and anxiety as civic discourse has coarsened and LGBT citizens have become increasingly a target for mistreatment by the federal government under Trump/Pence.  I have also come to realize that some who I thought were friends may, in fact not be my friends and may even support discrimination against me and others in the LGBT community not to mention against members of racial minorities.  And I am an educated white male with a career that would allow me to reopen my own law firm if things ever came to that.  Not everyone has that safety net.   Thus, I can only imagine the the stress and increased anxiety that racial minorities must be experiencing as the occupant of the White House continues to fan hate and bigotry and the Justice Department takes actions to allow open discrimination against people like me and others.  One venue where hate and bigotry is not easily avoided is in America's high schools where the situation shows how much damage is being done to younger generations.  The Virginian Pilot reports on the findings of a new study that ought to disturb decent, moral people (which, in my view, excludes Trump supporters).  Here are highlights:

Student anxiety and hostility on public high school campuses has worsened since Donald Trump became president and is affecting student learning, according to a new UCLA report.

More than half of public high school teachers in a nationally representative school sample reported seeing more students than ever with "high levels of stress and anxiety" between last January, when Trump took office, and May. That's according to the study, "Teaching and Learning in the Age of Trump: Increasing Stress and Hostility in America's High Schools," by John Rogers, director of the Institute for Democracy, Education and Access at the University of California at Los Angeles.

[N]early 80 percent said some students had expressed concern for their well-being because of the charged public conversation about issues such as immigration, health care, the environment, travel bans and LGBTQ rights, it said. Furthermore, 40 percent said concerns over key issues - such as Trump's ban on travelers from eight countries, most with Muslim majorities; restrictions on LGBTQ rights; and health care - are making it harder for students to focus on their studies and making them less likely to come to school.

"I had students stand up in the middle of class and directly address their peers with racial slurs," the report quoted Ohio social studies teacher Aaron Burger as saying. "This is not something I have seen before."

Here are key findings from the report:

The policy issue that concerned students the most was the Trump administration's statements about immigration, including the deportation of undocumented immigrants who came to the United States as children and are known as "dreamers." Jeff Seuss, a social studies teacher and coach in Nebraska, reported that some of his student athletes now live in "survival mode," never knowing if they will be deported to a country they never lived in.

79 percent of teachers reported that their students have expressed concerns for their well-being or the well-being of their families associated with recent public policy discourse on one or more hot-button issues, including immigration, travel limitations on predominantly Muslim countries, restrictions on LGBTQ rights, changes to health care, or threats to the environment.

"Many teachers described how the political environment 'unleashed' virulently racist, anti-Islamic, anti-Semitic or homophobic rhetoric in their schools and classrooms. An Indiana English teacher explained: 'Individuals who do harbor perspectives on racism and bigotry now feel empowered to offer their views more naturally in class discussions, which has led to tension, and even conflict in the classroom.'

Sadly, this is precisely what Trump voters wanted: to make those the deem to be "other" fearful and threatened.  It is a testament to just how toxic conservative "Christian values" have become.
Posted by Michael-in-Norfolk at Friday, October 27, 2017