Democracy in Decline - Do Republicans Even Care? 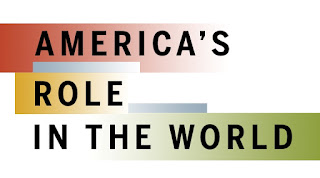 Before both World War I and World War II, America pursued an isolationist policy and tried to ignore events happening in Europe and around.  Such shortsightedness ended up costing America and the world dearly.  Now, American foreign policy seems headed toward making the same mistake as Der Trumpenführer seeks to back out of international treaties and agreements and panders to the uglier and more extremist elements of American society who seemingly embrace authoritarianism, ignorance, and a contempt - if not open hatred - of others.  The long term ramifications could prove dangerous both at home and abroad.  Yet Congressional Republicans for the most part appear only to happy to abandon long term policies and objectives as they mimic Trump's disdain for foreigners and the defense of democratic values around the world.  The world is watching and coming to realize that the values of red America are toxic.  A column in the Washington Post looks at the disturbing trends.  Here are excerpts:

It’s no surprise that when President Trump shot back at Sen. John McCain (R-Ariz.) last week, he failed to engage the substance of McCain’s argument.

But make no mistake: The challenge that McCain threw down a week ago, and that former president George W. Bush joined Thursday, is very much about an idea. It is about whether democracy, on the defensive around the world, can recover its confidence. That in turn depends in large part on whether the United States will honor what McCain called “the obligations of international leadership and our duty to remain ‘the last best hope of earth.’ ”

[T]he world is experiencing a “deepening democratic recession” characterized by fewer nations living freely, as measured annually by Freedom House; by increasing power projection from Russia and China; by the breakdown of democracy from Turkey to Thailand to Hungary; and by a “wave of illiberal populism” and a “decay of democratic values and self-confidence in the U.S. and Europe.”

You can debate the causes of this democratic decay, which obviously did not begin with Trump. Blame Bush’s invasion and bungled occupation of Iraq; President Barack Obama’s abandoning Syria to its grisly fate; or deeper, underlying trends of wage stagnation, economic inequality, fracturing social media.

But Trump’s admiration for strongmen and contempt for democratic values has accelerated the trend and shocked much of the world. Kori Schake, a Republican defense expert and Hoover fellow, said at the same seminar that the global anxiety today reminds her of what she was hearing from allies after the 9/11 attacks: People “are a little bit scared that America is becoming a different place than they thought they knew.”

Many Americans are worried about that, too. When I repeated Schake’s comment to Michael McFaul, a Hoover and Stanford scholar who served as Obama’s ambassador to Russia, he said he is “optimistic about our ability for renewal as a democratic society.”

But when it comes to global leadership, McFaul was less of an optimist. “The retrenchment period began under Obama, let’s be clear,” he said. “Trump is a more extreme version. That I fear may be permanent.”

The good news is the United States has hardly tried to counter the authoritarian offensive — which means that, if we stirred ourselves to act, we might yet shift the momentum. That is clearly what the old lions of the Republican Party are hoping for.

“For more than 70 years, the presidents of both parties believed that American security and prosperity were directly tied to the success of freedom in the world,” said Bush. “And they knew that the success depended, in large part, on U.S. leadership.”

The sad news is how few Republican leaders can bring themselves to defend traditional American ideals in the same way. Unless they do, the democratic recession will be increasingly likely to shift from cyclical phenomenon to the onset of something much scarier.