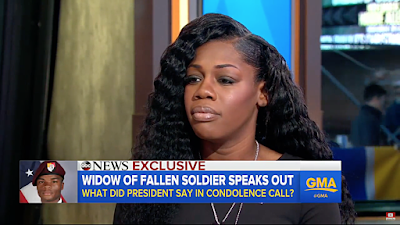 With his non-stop trail of lies that are constantly being documented as false, one would think that Donald Trump, a/k/a Der Trumpenführer, would realize at some point that refusing to stop lying only digs his hole deeper.  Now, with the widow of Sergeant La David Johnson joining Congresswoman Federica Wilson, Sgt. Johnson's mother, Trump nonetheless continues to lie.  His sickness and narcissism will simply never allow him to do the decent and moral thing is to apologize.  Equally troubling, of course, is General Kelly's willingness to lie and prostitute himself for the benefit of a morally bankrupt individual.  Hopefully, Kelly's place in history will be forever sullied.  Ditto for every other individual who has thrown away morality, honesty, and decency to serve Der  Trumpenführer.   Having nearly lost a family member in Afghanistan, I DO take all of this personally since, unlike Trump, I know that real people and real lives are involved.  Trump disgusts me. A piece in the New Yorker looks at Myeshia Johnson's refusal to bow down to Trump's lies.  Here are excerpts:

There were two moments during her interview on “Good Morning America” when the expression of the face of Myeshia Johnson, the widow of Sergeant La David Johnson, was transformed by a sudden smile. One came when George Stephanopoulos asked if it was true that she and La David—who was twenty-five when he died, three weeks ago, in Niger—had met when they were just six years old. “Yes, sir,” Johnson said. The other was when he mentioned that she was expecting her third child, a daughter, in January. Her oldest child is six now. Those are circumstances that could overwhelm anyone. But Johnson, throughout the six-and-a-half-minute interview, was steady, calm, and focussed on two goals: asking for answers about how her husband had died, and standing up to President Donald Trump, who, she said, when he called her, “couldn’t remember my husband’s name.” “I heard him stumbling on, trying to remember my husband’s name, and that’s what hurt the most, because, if my husband is out there fighting for our country, why can’t you remember his name?”

It’s a good question, and there might have been a charitable answer—Trump’s own emotion about the difficult task at hand, perhaps. But then the President responded by—in effect—calling Johnson, a Gold Star widow, a liar.

There were no accompanying words of compassion for Johnson, who said that the call “made me cry even worse.” Beyond the lack of empathy, this is a steep escalation of Trump’s claims that Representative Frederica Wilson, who was in a car with Johnson during the call, and said that the President had not been respectful, had “totally fabricated” her account of it. Trump has taken to calling Wilson “wacky”; his chief of staff, the retired general John Kelly, called her an “empty barrel” in a press conference last week, and put out a story about watching in disbelief as she grandstanded during an F.B.I. ceremony a number of years ago—a story that was, as a video of the event proves, demonstrably false. Did they think that Myeshia Johnson would not speak up for Wilson? If so, they were wrong.

When Stephanopoulos said, “The President said that the congresswoman was lying about the phone call,” Johnson did not hesitate. “Whatever Ms. Wilson said was not ‘fabricated,’ ” she said, speaking evenly. “What she said was one hundred per cent correct.” It was all on speakerphone, she said. “Why would we fabricate something like that?” The Trumpian answer is that, if it makes the President look bad, it must be a lie.

Myeshia Johnson also addressed a point that seems to have particularly outraged Kelly: that Wilson was listening in on the call, which he portrayed as a violation of something “sacred.” It was an odd complaint, given that Kelly himself had listened in, too, but Johnson put it to rest with a reminder that she was an actor in all this, rather than just a symbol. “I asked Master Sergeant Neil to put his phone on speaker, so my aunt and uncle could hear as well,” she said, referring to the service member assigned to them, who was on the line with the White House, and to her husband’s aunt and uncle, who raised him after his mother died when he was a small child. (They have been identified as his parents in some press accounts; his aunt, Cowanda Jones-Johnson, had earlier backed up Wilson’s account.) Wilson, Myeshia Johnson added, was there, too, because she had worked with La David’s uncle in an elementary school and had guided La David in a mentoring program called 5000 Role Models. “She’s been in our family since we were little kids,” Johnson said.

In the video of the speech that Wilson gave which so offended Kelly, she asked members of law enforcement in the audience to stand up and be honored. It is hard to know what bothered Kelly about her appearance that day. Wilson herself, in an interview with the Times, said that she had no explanation—“I’m just flabbergasted,” she said—but she added, in regard to the general context of the affair, that the Administration is stocked with “white supremacists.” (The Times noted that she was not speaking about Kelly personally.) In any event, Trump might need to learn that there are women who will neither praise him nor stay quiet or shrink when he attacks. Some of them are Gold Star widows. Generals are not the only ones who get to speak, for military families or for the country.

Trump is morally disgusting.  Anyone who continues to support him is, in my opinion, equally lacking in morality and decency.   They might like this assessment, but I believe that this charge is true.  And don't even get me started on the moral bankruptcy of the evangelical Christians who continue to stand by Trump and his hideous agenda.  Oh, and did I mention Trump's racism
Posted by Michael-in-Norfolk at Tuesday, October 24, 2017