Trump Speaks Volumes About the Danger Posed by the GOP Base 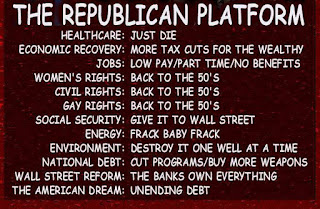 Perhaps I cannot totally escape my Roman Catholic upbringing despite the moral bankruptcy of the Church hierarchy as evidenced by the world wide sex abuse of children and youths and it's embrace of 12th Century knowledge.  Or perhaps it was the views of my parents who saw things as clearly as right and others as clearly wrong.  The follow through was that one did not associate with or support someone or groups who consistently engaged in wrongful behavior such as taking from the poor to give to the rich, failing to help the poor sick or needy, expressing open hatred for others and refusing to see their humanity.  These values are what I deem true "Christian" values.  Yet, for the vast majority of evangelical Christians and others who claim to be decent and moral, these values have been openly rejected by their support for Donald Trump and today's hideous incarnation of the Republican Party.   They put their loyalty to a political party that makes misogyny the norm ahead of the values they pretend to support.  Equally disturbing is their growing contempt for others who are different due to skin color, the country of their birth, their sexual orientation or their religious faith.  Only white, heterosexual, right wing Christians are deemed to be fully human.  This new orthodoxy of Republicans is frightening and dangerous.  The common good no longer matters to them, nor do the less fortunate, including children.  A column in the New York Times looks at the allegiance of the GOP base to Trump and its growing embrace of hate.  Here are excerpts:

Last year, as it became clear that Donald Trump would win the Republican nomination, analysts on both the right and the left speculated that millions of regular Republicans would be repulsed by his ethnonationalism and misogyny.

Come Election Day, however, Republican voters did not abandon their party. . . . . This pattern has continued into the present and shows no signs of letting up. In recent days, prominent Republicans, including George W. Bush, Bob Corker, John McCain and Jeff Flake, have warned in various ways that Trump is leading their party and the country in a very dangerous direction. For the moment, however, it is the president’s critics who are butting their heads against a brick wall. The reality is that neither Flake nor Corker is seeking re-election, and both would have struggled to win renomination if they presented themselves as adversaries of President Trump.

In short, the Trump-Steve Bannon-Laura Ingraham wing of the Republican party is ascendant. As Mike Allen headlined his post on Axios Wednesday: “Virtually every Republican now a Trump Republican.”

Alex Theodoridis, a political scientist at the University of California-Merced, put the state of play in a larger perspective: “The real story of Election 2016 is that the vast majority of Republicans voted for Trump” despite the fact that he was an outlier candidate who “lacked the normal credentials in terms of experience, ideology and character.” “Republicans identify, at a deep psychological level, more strongly with their party than do Democrats,” according to Theodoridis: The evidence is rather clear that the modern hyper-polarization is far more characterized by tribal division than by ideological distance. The real story seems to be the growing us-versus-them, in-group/out-group dynamic.

Theodoridis summed up the conclusions he and his colleagues reached in a blog post in Scientific American in November 2016: Partisanship for many Americans today takes the form of a visceral, even subconscious, attachment to a party group. Our party becomes a part of our self-concept in deep and meaningful ways.

In other words, the assumption that many Republican voters would be repelled by Donald Trump turned out to be wrong; instead party loyalty — “a visceral, even subconscious, attachment” — takes precedence.

These expressive partisans also feel increased schadenfreude, a complex positive emotion, when they read about bad things happening to or reflecting poorly on a political candidate of the other party. They even feel this positive emotion in reaction to events that are clearly negative. . . . . voters “not only increasingly dislike the opposing party,” but are also willing to “impute negative traits to the rank-and-file of the out-party.”

The growing strength of the kind of partisanship that is widespread today — whether you call it visceral, expressive, affective or tribal — undermines the workings of democratic governance.
A number of questions present themselves to us as a nation, most notably: Where are we going? Off a cliff appears to be the answer for now, but who is going to help us climb back up? What can mitigate these developments except disaster? Over time, will we just swing back and forth between parties with no bipartisan achievements at all? What phoenix will rise from the ashes of our tribal partisanship?

Of course, this phenomenon is not limited to the United States. It is a worldwide problem, which is another way of extending the question. Germany, France and the Netherlands have one answer, still refusing to yield government control to right-wing populists despite the success of ethonationalist insurgencies in all three countries; Austria, Poland, the Czech Republic, and Hungary have another answer — they are all currently swerving to the far right. Which path will we take?

Posted by Michael-in-Norfolk at Thursday, October 26, 2017