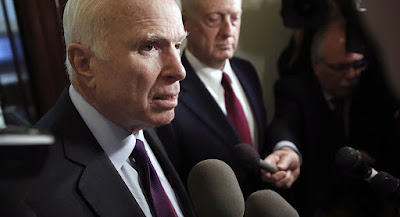 Questions continue to be raised about U.S. military actions in Niger after the ambush that killed four American soldiers.  Most Americans, including members of the U.S. Senate who should have known such military actions, knew nothing of America's involvement in Niger much less what the Americans who lost their life were doing their.  With an individual in the White House that I personally  deem to be unfit for office and mentally ill, it is critical that Congress reclaim its power to declare war - Section 8, Article I of the U.S. Constitution grants this power to Congress, not the president -  and launch any significant military action. We most certainly do not want the narcissistic liar-in-chief making unilateral war powers decisions that could reap horrific consequences to America and the world.  As Voice of America is reporting, the attack that killed four U.S. service members, it appears that there was a massive intelligence failure in Niger:

A local official and an analyst say residents of the Niger village where four Green Beret soldiers were killed this month may have delayed the soldiers while an ambush was set up and helped to lead the victims into a deadly trap.

"The attackers, the bandits, the terrorists have never lacked accomplices among local populations," said Almou Hassane, mayor of Tongo-Tongo where the attack took place, in what is believed to be his first interview with a Western news organization.

The village chief in Tongo-Tongo, Mounkaila Alassane, has been arrested since the attack, Hassane said, lending credibility to the suspicion of local involvement. He is in government custody according several officials.

While the soldiers were still in the village, a fake terror attack was staged nearby, according to Aksar and local sources. The soldiers rushed to the scene, where about 50 or more assailants with vehicles and motorcycles opened fire with Kalashnikovs and heavy weapons.

Four Nigerien soldiers and three Americans were killed on the spot. The body of the fourth American soldier was found 48 hours later, about a mile away from the initial site, CNN reported.

Rhissa Ag Boula, a high-ranking government official and a former Tuareg rebel chief in Niger, told VOA that the fourth soldier, La David Johnson, had remained at the front line while the others retreated under heavy fire.

The attack has raised questions in Niger, especially since the U.S. Army operates drone bases in the country and has significant intelligence resources there.

"That's what really shocked us: how, at their level, with all the resources they have, they could not have strong intelligence to avoid what happened there," said Hassane.

No group has officially taken responsibility for the attack. According to sources in the region, however, it is the work of Abu Adnan al-Saharaoui, who calls himself the Islamic Emir of the Great Sahara, affiliated with the Islamic State group.

Senator John McCain, has rightly called for a renewed debate in Congress to set parameters for the ability of the White House to authorize military actions overseas.  While the Niger incident is the immediate catalyst, fears of what Der Trumpenführer might seek to do in North Korea and Iran are no doubt at the back of McCain's mind and the minds of millions of other Americans. Politico looks at McCain's call for a new debate on limiting the president's powers to authorize military operations.  Here are article highlights:

McCain told reporters Monday that he and the Armed Services panel’s top Democrat, Rhode Island Sen. Jack Reed, are working on a proposal to update the broad war powers Congress gave the commander in chief after the 9/11 terrorist attacks.

The deaths of four U.S. soldiers in Niger earlier this month have stoked fresh interest in a new war powers vote, which the Trump administration has indicated it would not oppose — although it says it has all the legal authority it needs to conduct anti-terrorism operations under the existing 2001 authorization.

“We’re going to have to have” an updated authorization for the use of military force, said McCain, who has previously called for a new war powers resolution.

The Senate Foreign Relations Committee had already been scheduled to hold an Oct. 30 hearing on the president’s war powers, which Chairman Bob Corker (R-Tenn.) called “excellent” timing Thursday. But he remains unsure about any practical movement on an updated war powers measure. Indeed, lawmakers as well as senior Pentagon officials are still getting up to speed on critical facts regarding the Oct. 4 attack that killed four members of the U.S. Army Special Forces. Armed Services panel members are set for a Thursday briefing on the ambush in Niger, where the Pentagon’s Africa Command has stepped up its efforts against militants affiliated with the Islamic State terrorist group. Senior senators in both parties, including Lindsey Graham (R-S.C.) and Chuck Schumer (D-N.Y.), said on Sunday that they were unaware of the size of the U.S. military presence in Niger, though the White House formally notified the Hill about troops in Niger in June.

Lawmakers are now pressing to know more about the events of Oct. 4, and Joint Chiefs Chairman Gen. Joe Dunford pledged on Monday to provide those details.  “We owe the families as much information as we can find out about what happened,” the four-star Marine general said.

“With regard to Congress and the criticism we’re not providing enough information, … if the Congress doesn’t believe that they’re not getting sufficient information, then I need to double my efforts to provide them with information,” Dunford added.

Defense Secretary James Mattis last week said the type of attack that occurred in Niger was “considered unlikely,” but he nonetheless promised to “rapidly” release the findings of an investigation into the incident.

This year’s previous pitches to update the 2001 war authorization have been attached to other legislation, and have failed to come to fruition. A proposal to repeal the authorization by Rep. Barbara Lee (D-Calif.) was added to annual House defense spending legislation in June, but removed from the bill by House GOP leadership before it went to the floor.

And an attempt in September by Sen. Rand Paul (R-Ky.) to add a repeal of the 2001 and 2002 war authorizations to the must-pass National Defense Authorization Act was rebuffed by the Senate.  Lee, the only lawmaker to vote against the 2001 war authorization, called moves by Speaker Paul Ryan (R-Wis.) to derail her proposal “undemocratic.”

“People are asking, ‘Why are we in Niger?’ Rightfully so,” Lee said in an interview with Politico. “Well, a debate would provide information and answer a lot of questions and put Congress back in the mix in terms of us doing our job, because certainly we’re not.”

Congress needs to take back its power and limit the ability of an unfit malignant narcissist to authorize military action based on mere whims and petulant bursts of angry over his fragile ego.

Posted by Michael-in-Norfolk at Tuesday, October 24, 2017