Quotes of the Day: Jennifer Rubin and Jeff Flake 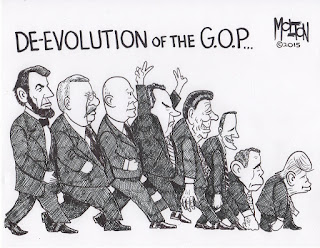 Real news outlets - which excludes Fox News and Breitbart - is covered with coverage today that looks at the denunciations of Donald Trump by GOP Senator Jeff Flake of Arizona and GOP Senator Bob Corker.  However, the rebukes actually went beyond Donald Trump.  By extension they applied to every Republican office holder and even to those who voted for Trump and revel in his misogyny and dangerous narcissism.  One of the best summations of this indictment of those who are complicit in Trump's ugliness, bullying, racism and  damage done to America's democracy is in a column in the Washington Post by former conservative columnist Jennifer Rubin.  Here are excerpts:

The message to the GOP and the rest of the country is sobering. If you are going to speak out, as Flake did in a blistering book criticizing Trump, and remain loyal to principles like free trade, immigration and fiscal sobriety, there is no place for you in Trump’s GOP. Moreover, remaining in Trump’s GOP means tolerating, if not enabling, Trump’s noxious mix of dishonesty, bullying, protectionism and racism. It is not a party that tolerates questioning of Trump — or, apparently, our generals. It is not a party that defends the First Amendment or the independence of the courts.

Many of my Republican "friends" keep trying to keep their heads firmly burrowed into the sand, but the time has come where each of must decide if we are on the side of truth, honesty, morality and decency or  on the side of Trump and the hideous thing that the Republican Party is becoming.

As for Flake's comments today, here are some excerpts via CNN:

We must never regard as "normal" the regular and casual undermining of our democratic norms and ideals. We must never meekly accept the daily sundering of our country - the personal attacks, the threats against principles, freedoms, and institutions, the flagrant disregard for truth or decency, the reckless provocations, most often for the pettiest and most personal reasons, reasons having nothing whatsoever to do with the fortunes of the people that we have all been elected to serve.

None of these appalling features of our current politics should ever be regarded as normal. We must never allow ourselves to lapse into thinking that this is just the way things are now. If we simply become inured to this condition, thinking that this is just politics as usual, then heaven help us. Without fear of the consequences, and without consideration of the rules of what is politically safe or palatable, we must stop pretending that the degradation of our politics and the conduct of some in our executive branch are normal. They are not normal.

It is often said that children are watching. Well, they are. And what are we going to do about that? When the next generation asks us, Why didn't you do something? Why didn't you speak up? -- what are we going to say?
Mr. President, I rise today to say: Enough. We must dedicate ourselves to making sure that the anomalous never becomes normal. With respect and humility, I must say that we have fooled ourselves for long enough that a pivot to governing is right around the corner, a return to civility and stability right behind it. We know better than that. By now, we all know better than that.

When we remain silent and fail to act when we know that that silence and inaction is the wrong thing to do -- because of political considerations, because we might make enemies, because we might alienate the base, because we might provoke a primary challenge, because ad infinitum, ad nauseum -- when we succumb to those considerations in spite of what should be greater considerations and imperatives in defense of the institutions of our liberty, then we dishonor our principles and forsake our obligations. Those things are far more important than politics.

Acting on conscience and principle is the manner in which we express our moral selves, and as such, loyalty to conscience and principle should supersede loyalty to any man or party. We can all be forgiven for failing in that measure from time to time. . . . . . But too often, we rush not to salvage principle but to forgive and excuse our failures so that we might accommodate them and go right on failing—until the accommodation itself becomes our principle.

We were not made great as a country by indulging or even exalting our worst impulses, turning against ourselves, glorying in the things which divide us, and calling fake things true and true things fake. And we did not become the beacon of freedom in the darkest corners of the world by flouting our institutions and failing to understand just how hard-won and vulnerable they are.

When I resigned from the Republican Party more than a decade and a half ago after 8 years as a precinct captain and City Committee member, I did so for the reasons Flake enunciated.   Adhering to principles and morality and Constitutional values always supersedes loyalty to Party.  Yet, that is not the case with a majority of Republicans nowadays. Moral and decent Republicans need to exit the GOP and vote Democrat whenever possible to blunt the hideousness that is flowing through the GOP from the White House down.
Posted by Michael-in-Norfolk at Tuesday, October 24, 2017