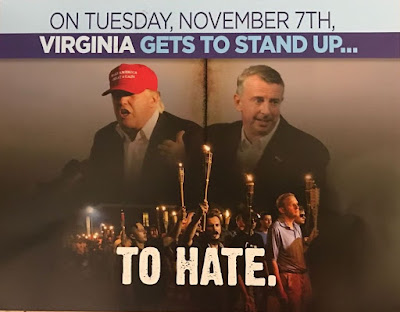 The campaign of GOP gubernatorial candidate Ed Gillespie is having conniption fits because a Virginia Democratic Party mailer correctly links Gillespie to white supremacists. Having viewed many of Gillespie's ads that have definite racist undercurrent to them, combined with his refusal to condemn Donald Trump's apparent embrace of white supremacists in Charlottesville back in August, 2017, and his effort to court Corey Stewart supporters who rallied to Stewart's openly racist and pro-Confederate campaign, I believe that the mailer is accurate.  No doubt some of my Republican "friends" who continue to stick their heads in the sand - or elsewhere where the sun doesn't shine, if you want my candid opinion - will whine and feign false outrage just like Gillespie, but the sad reality is that today's Republican Party IS a racist party and Gillespie - as are AG candidate John Adams and Lt. Governor candidate Jill Vogel - is pandering to white supremacists and religious extremist.  He has no chance of winning without their strong support.  Sometimes, the truth hurts and, if my Republican "friends" do not like being tied to white supremacists, they have two options on November 7th: stay home and do not vote, or vote for the Democratic ticket.  It's really very simple.  If you vote for candidates of a party with a racist, anti-minority agenda, then look in the mirror and face the reality that perhaps you are in fact a racist even if you are not donning KKK robes regularly. The Washington Post looks at the mailer and the GOP's feigned outrage.  Here are excerpts:

Virginia’s heated election cycle is becoming increasingly nasty, with the statewide Democratic ticket sending out a new mailer linking Republican gubernatorial candidate Ed Gillespie and President Trump to the torch-bearing white nationalists who descended on Charlottesville over the summer.

In August, violent clashes between white supremacists in Charlottesville rallying to defend a statue of Confederate General Robert E. Lee and counterprotestors left one woman dead and two state troopers died when their helicopter crashed.

The mailer features images of both Republican men above a photo of the white supremacists with the text, “On Tuesday November 7th, Virginia Gets To Stand Up...To Hate.”

The back of the literature features a prominent image of Democratic gubernatorial candidate Ralph Northam, along with Democratic lieutenant governor nominee Justin Fairfax and Attorney General Mark Herring, with the message “This is our chance to stand up to Trump, Gillespie, and hate.” All three Democrats approved the ad, and the Democratic Party of Virginia paid for the mailer. Gillespie’s campaign condemned the mailer, which was first reported by the Richmond Times-Dispatch. Northam campaign spokesman David Turner countered that the mailer was fair because Gillespie did not explicitly condemn the president’s response to the Charlottesville unrest. Democrats pummeled Gillespie, a former Republican National Committee chairman, for not joining members of his own party, including Virginia U.S. Reps. Barbara Comstock and Scott W. Taylor, in directly criticizing Trump’s reaction. . . . Ed Gillespie should be willing to call out Donald Trump when he’s wrong and because he won’t, he gives voters a clear choice on Nov. 7.”
[I]n September, Gillespie began airing ads that aimed to link MS-13 gang violence to Northam, while using images of Latinos in a way Latino groups call racist and inflammatory. And another ad suggests Northam wanted to restore gun rights to violent felons. Both parties are also trading barbs over mailers targeting against Latina candidates.


Oh, and lit's not forget that the entire GOP ticket supports voter ID laws and other GOP efforts to disenfranchise minority voters under the lie of preventing nonexistent voter fraud.   Gillespie, et all deserve the label given to the, plain and simple.

Posted by Michael-in-Norfolk at Thursday, October 26, 2017