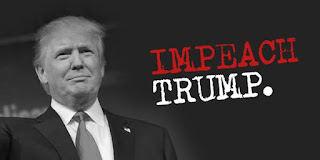 The caption of this post is from an op-ed in the New York Times that lays out the argument as to why Democrats should embrace a movement to have Donald Trump impeached.  Like many others, I view Trump as toxic, dangerous and a threat to society.  His only "success" to date is placing a man on the U.S. Supreme Court who believes that the real or feigned religious beliefs of Christian extremists override the nation's laws.  Meanwhile, his Cabinet appointees/henchmen seek to usher in pollution and an unwinding of safety regulations that protect everyday American families.  On the education front, the opponent of public education, Betsy DeVos is undoing 72 different rules that will do harm to special education students and many others.  If this is not all bad enough, Republicans have introduced the following bills in the House of Representatives:

1. HR 861 to Terminate the Environmental Protection Agency
2. HR 610 - Vouchers for Public Education (which may end free public education as we know it) 3. HR 899 to Terminate the Department of Education (which may lead to greater disparity between states) 4. HR 69 to Repeal the Rule Protecting Wildlife  5. HR 370 to Repeal the Affordable Care Act  6. HR 354 to De-fund Planned Parenthood
7. HR 785 - National "Right to Work" (this one is actually a 'Right to fire you whenever your boss feels like it" law, and it would effectively end unions)
8. HR 83 - Mobilizing Against Sanctuary Cities Bill
9. HR 147 to Criminalize Abortion (“Prenatal Nondiscrimination Act”)

But back to impeachment.  Here are column highlights:

Last week, Tom Steyer, the billionaire progressive donor, announced a $10 million campaign calling for President Trump’s impeachment, beginning with a television commercial running in all 50 states. Trump, the spot says, has “brought us to the brink of nuclear war, obstructed justice at the F.B.I., and in direct violation of the Constitution, he’s taken money from foreign governments and threatened to shut down news organizations that report the truth.” Appearing on screen, Steyer asks, “If that isn’t a case for impeaching and removing a dangerous president, then what has our government become?”

It’s a good question. Yet while most elected Democrats probably agree that Trump’s presidency is a nightmare, they’ve been largely reluctant to use the “I” word. The base wants impeachment — according to an August survey from the Public Religion Research Institute, 72 percent of Democrats support efforts to remove Trump from office. But inside the Beltway, calling for impeachment remains strangely taboo.

Some members of Congress are awaiting the results of the investigation being conducted by Robert Mueller, the special counsel, and the case for impeachment may become stronger when his inquiry is complete. Yet whatever Mueller discovers, we have credible reasons for impeachment right now. The Constitution dictates that presidents be impeached for “treason, bribery, or other high crimes and misdemeanors.”

[L]egal scholars have laid out cases for impeachment based on Trump’s blatant violations of the Constitution’s emoluments clause; his abuse of power in pardoning the former Arizona sheriff Joe Arpaio; and for passing Israeli intelligence to Russian officials, among other misdeeds. In July, Representative Brad Sherman, a California Democrat, introduced an article of impeachment on the grounds that Trump attempted to obstruct justice by firing James Comey from the F.B.I. Yet he had only a single co-sponsor . . Steyer, a hedge fund manager-turned-environmentalist who spent more than $91 million on behalf of Democrats in 2016, finds this reticence baffling. “What is the calculus to being silent on the most important issue of the day, where it’s absolutely critical to the American people, and it will go on the historical record of what you did or didn’t do?” he asked me. “I don’t understand.” I’ve spoken to Democrats who fear making impeachment too partisan, holding out hope that if Trump’s behavior becomes egregious enough Republicans might join the effort to hold him accountable. . . . And, of course, some on the left believe that a functioning Mike Pence administration would be worse than the dysfunctional Trump regime.

There are strategic merits to all these arguments. But they leave many Americans terrified by Trump’s erratic behavior and incompetence feeling marooned, confused as to why their leaders aren’t treating this presidency like the civic emergency that it is. At some point, we need politicians to address the crisis in front of us.

[A] Republican-controlled Congress has little incentive to act. But even if Democrats retake the House in 2018, Sherman told me, impeachment “would still require a change in public opinion.”

This is why Steyer’s campaign is potentially useful, even if at first glance it seems quixotic. . . . . But Steyer is aiming at movement-building; he wants to reach people who desperately want Trump gone but don’t know what to do about it. “We’re asking electeds to stand up for the right thing, but we’re going to American citizens to ask them to demand it,” he said.

Democrats may wish to return to a less destructive brand of politics, but that’s not an option while Trump sits in the White House.

While he does, we’re all better off if he thinks impeachment is a possibility. “I’m hoping that if Trump is aware that he could be removed, that that awareness constrains him to the extent he can be constrained,” Sherman said. And the best way to show Trump that people are serious about impeaching him is to put the message on television.

Posted by Michael-in-Norfolk at Tuesday, October 24, 2017

I doubt I would rather have Pence....