The GOP Health Care Hoax Has Been Exposed 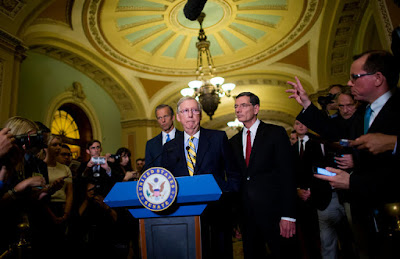 The top three Republicans in America, Donald Trump, Mitch McConnell and Paul Ryan are all utterly amoral, if not immoral men.   Likewise, all make a pretense of having varying regards for the Christian faith.  None, in actuality give a damn for the Christian social gospel as has been strikingly demonstrated first by the GOP House healthcare  bill and now the Senate GOP bill which proved so horrific in its impact on millions of Americans that McConnell had to scrape a vote on the nightmare bill this week as previously planned.   More time to twist Republican arms will not change the ugliness of the bill or its treatment of virtually millions of Americans as disposable garbage.  As for Trump, he continues to lie about the bill to his ignorance embracing base somehow believing they will continue to believe his lies even when their health care coverage evaporates or triples in cost.  Hopefully, Trumpcare is moribund.  A New York Times looks at the exposure of the GOP's constant lies on health care.  Here are excerpts:

Senator Mitch McConnell hoped that keeping his wretched bill to destroy the Affordable Care Act secret until the last minute would make it easier for him to railroad fellow Republicans. The facts the majority leader had hoped to suppress came back to bite him on Monday when the Congressional Budget Office released a detailed review of the bill that confirmed what governors, doctors and indeed the American public had been saying for days: The bill is a cruel hoax that would help the wealthiest Americans at the expense of the poorest.

With members of his own party balking at even bringing the measure to the Senate floor, Mr. McConnell announced on Tuesday that a vote would be delayed until after the July 4 recess. A wiser course — for his party as well as the nation — would be to concede defeat and give up what now seems a desperate quest to fulfill a seven-year-old party commitment to kill an Obama-era program that, as it turns out, a large number of Americans would like to see preserved and improved.

The budget office said the measure would leave 22 million more Americans without insurance by 2026. Hit hardest would be lower-income people between the ages of 50 and 64 and people struggling with chronic illness or battling addiction — many of the same voters who believed President Trump’s promises to improve their health care. The bill would cut $772 billion over the next decade from Medicaid, which covers most of America’s poor children and nursing home patients, to help finance tax cuts for the wealthy.

Some Republican senators — Ron Johnson of Wisconsin, Rand Paul of Kentucky, Ted Cruz of Texas — actually complain that the bill is too generous and doesn’t deliver sufficient spending cuts. But others — Susan Collins of Maine, Rob Portman of Ohio, Dean Heller of Nevada — have listened to those who are outraged that they’d even consider such a harmful measure.

Mr. McConnell and his allies promoted it with fibs. Mr. McConnell, for instance, claimed it would “strengthen Medicaid.” John Cornyn of Texas said it would “save the people who are currently being hurt.” Some states that would be most deeply hurt by the bill are represented by Republicans who back it. Looking at you, Richard Burr of North Carolina; Pat Toomey of Pennsylvania; and Mr. Cornyn, the majority whip hellbent on forcing a vote this week.

And then there’s Mr. McConnell. Under Obamacare, the majority leader’s home state, Kentucky, experienced one of the biggest reductions in the rate of uninsured people of any state in the nation . . . . Even so, despite all evidence, Mr. McConnell seems determined to impose his will and deny these very same people access to the benefits of Obamacare when he returns to Washington.

What has blocked the bill’s progress on Capitol Hill, at least for now, is that ordinary Americans have begun to pay attention to the facts instead of the fearmongering and falsehoods emanating from the White House and the congressional leadership.

As I have noted before, I do not know how any morally decent person can vote Republican given what the party has become.  As for all those Republican voters who flock to church pews each Sunday (seemingly only caring about condemning abortion and gay sex), it is all to obvious that it is all an act.  These very same people have forgotten how Christ said one would be judged by how they have treated others. This bill embodies utter moral bankruptcy and a betrayal of Christ's message.
Posted by Michael-in-Norfolk at Wednesday, June 28, 2017