It is Republicans Who Have a Religion Problem, Not Democrats 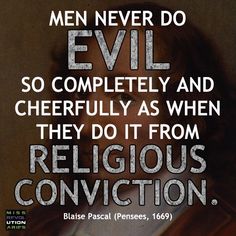 Time and time again we hear about Democrats having a "religion problem" and not being able to connect with religious voters.  In fact, there is yet another op-ed in the New York Times by a history professor in Georgia that suggests that Democrats lost the recent special election because of an inability to connect with "religious voters."  I would argue that in contrast that it is Republicans who have a a religion problem - one that will soon catch up with them as the Millennials begin voting in large numbers and older religious voters finally wake up to the reality that the GOP's religion is one motivated by hatred of others, a betrayal of the social Gospel, and down right meanness. In short, the GOP is becoming synonymous with the Christofascists.  The hideousness of the new Senate GOP's healthcare "reform" bill shows just how little the GOP's religious values have to do with Christ's message.  One third (1/3) of Millennials have left organized religion completely. Nones will soon equal the number of evangelical Christians.  The number of non-Christians of other faiths is growing and many view the GOP/Christofascists with alarm.  Long term, the GOP, not Democrats will have a severe religion problem, notwithstanding the usual whining about Democrats not coddling the "religious" sufficiently.  Here's a sample of the usual whining via the Times op-ed:

Jon Ossoff’s defeat in Georgia’s Sixth Congressional District election on Tuesday wasn’t just a sign that Democrats may have a harder time winning in the Trump era than they had hoped. It is a symptom of a larger problem for the party — a generational and racial divide between a largely secular group of young, white party activists and an older electorate that is more religious and more socially conservative.

Put simply, outside of a few progressive districts, secular-minded young activists in the party are unable to win voters’ trust.

Mr. Ossoff, 30, represented this new wing of the party. . . . Mr. Ossoff’s secularism would have surprised many American liberals of the 1950s and 1960s, who looked to the moral inspiration of the Rev. Dr. Martin Luther King Jr. and the theologian Reinhold Niebuhr, both of whom saw a religious imperative for social justice. The civil rights movement was grounded so thoroughly in the theology and culture of the African-American church that the historian David L. Chappell has called it a “religious revival.” And the economic views of New Deal and Great Society liberalism echoed the positions of mainline Protestant denominations and the social teachings of 20th-century Catholicism.

[N]ow younger, secular Democrats are attempting to separate their party’s progressive values from those religious traditions. Some may belong to a religious tradition or consider themselves to be spiritual people, but they are not able to speak the language of a communally based faith because it does not inform or shape their political views.

Democratic voters are not as secular as these activists might assume. While only 47 percent of white, college-educated Democrats identify as Christians, Christianity remains the faith of 81 percent of African-American Democrats and 76 percent of Latino Democrats.

The party is thus split between a minority of young, educated, secular white activists and a larger group of African-Americans, Hispanics and older whites whose political values are closely tied to their faith. No wonder candidates like Mr. Ossoff struggled to connect with key blocs of the Democratic coalition.

And it’s also no wonder that the Democratic congressional leadership is still dominated by a graying generation of leaders; they are the only ones who can bridge the party’s religious divide.

What can Democrats do to bridge the divide between young, secular party activists and the rest of voters? Oddly, last year’s presidential run by Senator Bernie Sanders, a secular Jew, may suggest a way forward.

Mr. Sanders’s non-Christian background may have hurt him in the South; he did poorly among African-American voters, despite his consistent civil rights record. But he did what few other secular candidates have done: He won a sympathetic hearing from conservative evangelicals with a speech that gave a religious grounding for his economic views, complete with biblical citations. When Mr. Sanders spoke at Liberty University, he did not pretend to share evangelical Christians’ faith, but he showed respect for his audience’s religious tradition.

To do the same, secular Democrats need to study the religious language of Jimmy Carter, Bill Clinton and Barack Obama. They need to take the time to learn the religious values of their audience. They need to be honest about their own secularity, but acknowledge their debt to the religious traditions that have shaped their progressive ideology.

Only through a willingness to ground their policy proposals in the religious values of prospective voters will they be able to convince people of faith that they are not a threat to their values but are instead an ally in a common cause.

The author strikes me as one of the many who are still trying to maintain the myth that religion is a positive force for society and that, therefore, it deserves continued deference and respect.  In reality, "people of faith" - or at least evangelical Christians - are among the number one problems with America today.  Let's not forget that 81% of evangelicals voted for Trump and happily embraced his appeals to racism and religious based hatred and bigotry.  Simply put, they are not nice and decent people and rather than follow the suggestions of the author, what Democrats need to do better is educate the public about the ugliness of the religious agenda of the GOP base/Christofascist and that they need to stop being duped into voting against their interest by dishonest appeals to religiosity.  The Senate healthcare bill can be used as a teaching tool for Democrats.  True Christians should find the bill abhorrent.  Liberty University and its leadership represents the antithesis of the Gospel message.
Posted by Michael-in-Norfolk at Sunday, June 25, 2017