Neil Gorsuch Proves He Is Anti-LGBT 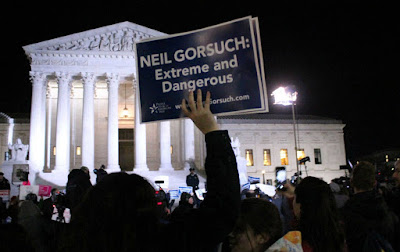 Perhaps it is because I am an attorney and I have enjoyed writing appellate briefs in the past, including one to the Virginia Supreme Court equating anti-gay employment discrimination with impermissible - at least before the age of Der Trumpenführer - religious based employment discrimination (my former law school classmate then on the Court was none too pleased to even have to hear my argument since, I believe she knew I was right).  Or perhaps it is because I realize that court rulings have often moved forward the fight for LGBT equality.  Whatever the cause, I watch U.S. Supreme Court rulings that impact LGBT issues closely to see what allies or enemies we may have on the Court.  As Facebook friend and writer Michelangelo Signorile sets out in a piece in HuffPost, Trump appointed Justice Neil Gorsuch is showing his hand as an enemy of LGBT citizens.  More decisions will be coming and it is likely that Gorsuch will put disingenuous "religious liberty" claims - which in essence translate to special rights for Christofascist - ahead of basis civil rights for LGBT Americans.  As I always caution people, Hitler could be charming when he wanted to be.  That doesn't mean that he wasn't deranged and dangerous.  Personal one on one relationships are never guaranteed to be indicative of the lack of animus or contempt that people can hold toward a group as a whole.  Here are highlights form Michelangelo's piece:

Back in February, when Donald Trump nominated Neil Gorsuch to the Supreme Court, I wrote a piece: “Why Neil Gorsuch Likely Believes It’s Perfectly Fine To Ban Gay Sex.”

It brought out some Gorsuch defenders, including some of his students (at the University of Colorado, Boulder, where Gorsuch taught) and friends of Gorsuch, who responded to me on Twitter and elsewhere, some angrily, accusing me of wrongly portraying Gorsuch as a homophobe.

In fact, I did nothing of the kind, even pointing to the fact that Gorsuch had a former clerk to whom he reportedly offered support upon the former clerk’s same-sex marriage in 2014. My point was that whether he was a homophobe or not, Gorsuch is a constitutional originalist like the late Justice Antonin Scalia, whom Gorsuch revered. Scalia based his own opposition to overturning sodomy statutes ― and his other anti-LGBTQ opinions ― on originalism.

[A] New York Times story, [came out] just as the organized campaign for Gorsuch by right-wing groups and the White House was gearing up, [entitled] “Gorsuch, Hard to Pigeonhole On Gay Rights, Friends Say.” I was quoted in the piece:

Just this past week, the gay author and blogger Michaelangelo Signorile published a piece in The Huffington Post headlined: “Why Neil Gorsuch Likely Believes It’s Perfectly Fine to Ban Gay Sex.” In it, he argued that Judge Gorsuch “may be all mild-mannered and cuddly, but that doesn’t mean he wouldn’t in a heartbeat deny your very existence under the Constitution if you happen to be queer.”

The Times article seemed almost designed to counter those kinds of opinions ― which were based on Gorsuch’s judicial decisions and writings ― by presenting us with Gorsuch’s gay friends, who spoke glowingly of him as a person.

Christian Mammen, described as “a Democrat” and someone who “grew close” to Gorsuch when they were at Oxford together, was referred to in the piece as one of several friends who, rather than viewing Gorsuch as in the mold of Scalia, “wonder if his jurisprudence might be closer to that of Justice Anthony Kennedy who has carved out a name for himself as the court’s conservative defender of gay rights.”

But as I pointed out in a second piece I published later that day in response ― drawing upon the analyses of the highly regarded Supreme Court reporters, Linda Greenhouse of the New York Times and Nina Totenberg of National Public Radio, specifically on the histories of both LGBT rights and originalism at the Supreme Court ― this was naive at best, as Justice Kennedy is not an originalist:

It’s not “everybody” else who has Gorsuch pegged as being like Scalia ― it’s Gorsuch who has willingly, unequivocally pegged himself that way. He gave a major speech about the importance of the late justice and his philosophy last year and, again, publicly adheres, like Clarence Thomas, to Scalia’s philosophy of originalism. Based on that and his decisions, the Times put Gorsuch on a chart as just to the right of Scalia, with only Thomas further to the right. And, much as Gorsuch’s gay friends would like to believe otherwise, Justice Kennedy is not an originalist. In fact, his sound rejection of originalism is what had him lead the court majority in ruling that gays are protected against discrimination in the Constitution, should not be criminalized, and most certainly have the right to marry.

And now we have the proof of just how wrong Gorsuch’s friends were, looking at the actions of the court this week. Gorsuch revealed a dangerous disregard for the Obergefell marriage equality decision, in a 6-3 ruling that overturned an Arkansas law that prevented both parents in a same-sex marriage from being named on the birth certificate when one gives birth to a child ― as is the case for heterosexual marriages in the state.

Gorsuch took pride in writing the dissent, joined by far-right Justices Thomas and Alito, clearly supporting flat out discrimination and ignoring precedent ― something even Justice John Roberts, who dissented in Obergefell but joined the majority in this case, would not do.

Slate legal writer Mark Joseph Stern, noting that Gorsuch is “everything that liberals most feared,” explained how Gorsuch is laying the groundwork to harm or even reverse Obergefell:

On Monday, Gorsuch indicated that he opposes equal rights for same-sex couples, dissenting from a ruling that requires states to list same-sex parents on birth certificates ... That, alone, is startling: In Obergefell v. Hodges, the court held that the Constitution compels states to grant same-sex couples “the constellation” of “rights, benefits, and responsibilities” that “the states have linked to marriage,” including “birth and death certificates.” Obergefell, then, already settled this issue. Gorsuch’s dissent suggests he may not accept Obergefell as settled law and may instead seek to undermine or reverse it.

The court also announced it would take the case of a Colorado baker who was penalized for refusing to serve a gay couple ― a couple that wanted a wedding cake but hadn’t even yet discussed design with the baker, and were turned away when they simply identified they were having a same-sex wedding. Many legal observers believed that when the court didn’t take a similar case a few years ago that involved a wedding photographer in New Mexico, it was deferring to state sovereignty in states like Colorado and New Mexico where LGBT people are protected under state law against discrimination in public accommodations.

It takes four justices for the court to accept a case. It’s hard to believe that Gorsuch is even farther to the right on this issue than Scalia. But Scalia did have a reverence for states’ rights, while Gorsuch seems to have a fetishistic obsession with “religious liberty.” As I’ve described in looking at his opinion on Hobby Lobby while he was a judge on the 10th Circuit Court of Appeals, he went much further than both Justice Alito, who wrote the Hobby Lobby decision for the Supreme Court, and Kennedy, who wrote a concurring opinion.

Last week I thought that the first case to be the test of the reach of Gorsuch ’s view of religious liberty might be the abominable Mississippi law that a federal appeals court allowed to go into effect ― considered the worst anti-LGBTQ law ever by many LGBTQ activists and legal experts.

But obviously that will likely be the second act, after the Colorado baker case. All of this is part of the long-term strategy I’ve written about, interviewing those on the right and attending their conferences, in which religious conservatives, dealt a blow by Obergefell, will now work ― as they did regarding Roe v. Wade ― to weaken the decision, and try to turn same-sex marriage into second-class marriage.

As for my "friends" who voted for Trump and put this likely nightmare in motion, you are on notice that I WILL hold you personally accountable for the harm done to LGBT citizens. Your laziness in not becoming informed on Trump's promises to Christofascists and/or rote voting Republican are not acceptable excuses.   Saying "I did'nt know" or that "things will be alright" simply do not cut it.  Do not expect my forgiveness, be cuase it will not be forthcoming.
Posted by Michael-in-Norfolk at Wednesday, June 28, 2017