The Big Lie Behind the GOP Quest for Tax Cuts 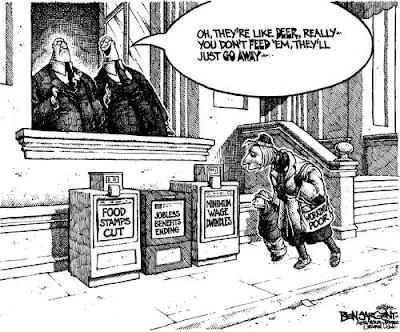 No one likes paying taxes and the husband an I certainly pay our share - or more than our share per Republican thinking.  Yet we realize that the nation needs roads, defense and, yes, to have a social safety net for the less fortunate.  We may not be regular churchgoers (gave that up years ago when I realized the Catholic Church leadership was morally bankrupt), but we understand that moral imperative.  It seems, however, that most Republicans do not, most especially the party leadership that depicts those receive assistance as lazy and undeserving and living on lavish benefits.  As an editorial in the New York Times lays out, such is not the case and much of the GOP agenda is merely based on a big lie when this false premise is stripped away.  The true motive becomes greed with a strong dose of racism aimed at those who are "undeserving."  The irony is that most welfare recipients and Medicaid beneficiaries are poor whites.   Here are editorial highlights:

With the Senate effort to upend Obamacare suspended for the Fourth of July holiday, there’s a chance to step back and examine the assumptions behind Republicans’ longstanding objections to the social safety net — as well as the flaws in those assumptions.

From Ronald Reagan’s invocation of a “welfare queen,” to Mitt Romney’s derision of “takers,” to the House and Senate bills to cut taxes for the rich by taking health insurance away from tens of millions of people, the premise of incessant Republican tax cutting is that the system robs the rich to lavish benefits on the poor.

But here is an essential and overlooked truth: As a share of the economy, federal spending on low-income people, other than for their health care, has been falling steadily since it peaked in 2011, after the Great Recession, and while it’s still slightly above the long-term average, it is declining, according to a recent series of reports by the Center on Budget and Policy Priorities.

Mandatory non-health programs like food stamps, earned-income tax credits and Supplemental Security Income for impoverished elderly and disabled people currently equal 1.5 percent of the gross domestic product, only modestly above the 40-year average of 1.3 percent. Moreover, if spending on those programs continues its current downward trend, it will fall below the long-run average by 2024.

Spending has risen for Medicaid, which the Senate and House health care bills would slash. But the increase is not the result of generosity or waste. Much of it is from rising nursing home admissions as the population ages. Medicaid insures most nursing home residents — after they have exhausted their savings.

Medical inflation, which usually rises faster than the general inflation rate, also pushes up Medicaid costs. But Medicaid is not driving that inflation. In fact, compared with privately insured care, Medicaid’s costs have risen more slowly over the past decade and its costs per beneficiary are lower, partly because it has no profit margin.

By using Medicaid to cover millions of previously uninsured people, Obamacare chose the most economical and efficient part of the health care system to achieve a historic reduction in the number of uninsured. And by using tax increases on the well-to-do to pay for expanded coverage, the expansion did not add to budget deficits.

[T]otal federal spending on people struggling to get by is projected to hold steady. That is not lavish. And it is not an excuse for tax cuts that deprive tens of millions of people of health insurance.

I cannot help but wonder at the irony: church going evangelicals support this horrific  attitude and would be treatment of the sick and poor, while I and other gays who they view as sinful and "degenerate" believe we have a duty to care for the sick, elderly and less fortunate.  Who are the ones showing true loyalty to Christ's message?
Posted by Michael-in-Norfolk at Thursday, June 29, 2017