Nixon, Trump, and How a Presidency Ends 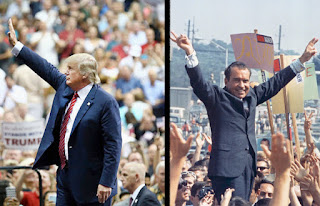 As a piece in New York Magazine argues, the opponents of Der Trumpenführer simple need to just wait and maintain pressure on Congressional Republicans.  The piece reminds us that Watergate did not become a presidency ending phenomenon over night.   Despite the efforts of Vichy Republicans who would happily turn a blind eye even to Trump's murder of someone in broad day light in the middle of 5th Avenue, if the spotlight remains focused on obstruction and lies and self-dealing, at some point Trump may become too much of a burden for them.  We can only hope that that day comes sooner as opposed to later and that Mike Pence gets caught up in the collapse of a presidency that should never have occurred.  Here are article highlights:

“Let others wallow in Watergate, we are going to do our job,” said Richard Nixon with typical unearned self-righteousness in July 1973. By then, more than a year had passed since a slapstick posse of five had been caught in a bungled burglary at the Democratic National Committee headquarters in the Watergate complex. It had been nine months since Bob Woodward and Carl Bernstein reported in the Washington Post that the break-in was part of a “massive campaign of political spying and sabotage” conducted by all the president’s men against most of their political opponents. Now the nation was emerging from two solid months of Senate Watergate hearings, a riveting cavalcade of White House misfits and misdeeds viewed live by 71 percent of the public.

Even so, Nixon had some reason to hope that Americans would heed his admonition to change the channel. That summer, the Times reported that both Democratic and Republican congressmen back home for recess were finding “a certain numbness” about Watergate and no “public mandate for any action as bold as impeachment.”

Gallup put the president’s approval rating in the upper 30s, roughly where our current president stands now — lousy, but not apocalyptic. There had yet to be an impeachment resolution filed in Congress by even Nixon’s most partisan adversaries. . . . . Might Tricky Dick pull off another Houdini? He was capable of it, and, as it happened, it would take another full year of bombshells and firestorms after the televised Senate hearings before a clear majority of Americans (57 percent) finally told pollsters they wanted the president to go home. Only then did he oblige them, in August 1974. [A]mong those of us who want Donald Trump gone from Washington yesterday, there’s a fair amount of fear that he, too, could hang on until the end of a four-year term that stank of corruption from the start. Even if his White House scandals turn out to exceed his predecessor’s — as the former director of national intelligence James Clapper posited in early June — impeachment is a political, not a legal, matter, and his political lock on the presidency would seem secure. Unlike Nixon, who had to contend with Democratic majorities in the House and Senate, Trump has the shield of a Republican Congress led by craven enablers terrified of crossing their Dear Leader’s fiercely loyal base. That distinction alone is enough to make anti-Trumpers abandon all hope. I’m here to say don’t do so just yet. . . . . . If you look through a sharp Nixonian lens at Trump’s trajectory in office to date, short as it has been, you will discover more of an overlap than you might expect. You will learn that Democratic control of Congress in 1973 was not a crucial factor in Nixon’s downfall and that Republican control of Congress in 2017 may not be a life preserver for Trump. You will find reason to hope that the 45th president’s path through scandal may wind up at the same destination as the 37th’s — a premature exit from the White House in disgrace — on a comparable timeline. The skids of Trump’s collapse are already being greased by some of the same factors that brought down his role model: profound failings of character, disdain for the law (“If the president does it, that means that it is not illegal,” in Nixon’s notorious post-resignation formulation to David Frost), an inability to retain the loyalty of feuding White House aides who will lawyer up to save their own skins (H. R. McMaster may bolt faster than the ultimately imprisoned Nixon chief of staff H. R. Haldeman), and dubious physical health (Trump’s body seems to be bloating in stress as Nixon’s phlebitis-stricken leg did). Further down the road, he’ll no doubt face the desertion of politicians in his own party who hope to cling to power after he’s gone. The American University historian Allan Lichtman, famous for his lonely prediction of Trump’s electoral victory, has followed up that feat with The Case for Impeachment, a book-length forecast of Trump’s doom. The impeachment, he writes, “will be decided not just in the halls of Congress but in the streets of America.” I’d go further to speculate that Trump’s implosion is more likely to occur before there’s an impeachment vote on the floor of the House — as was the case with Nixon. But where Nixon’s exit was catalyzed by an empirical recognition that he’d lost the votes he needed to survive a Senate trial, in Trump’s case the trigger will be his childish temper, not the facts. I suspect he’ll find a way to declare “victory,” blame his departure on a conspiracy by America’s (i.e., his) “enemies,” and vow to fight another day on a network TBA.

But as was also true with Nixon, some time and much patience will be required while waiting for the endgame. The span between Nixon’s Second Inaugural and his resignation was almost 19 months. Trump’s presidency already seems as if it’s lasted a lifetime, but it’s only five months old. Never forget that the Watergate auto-da-fé wasn’t built in a day.

I hope that the author is right!
Posted by Michael-in-Norfolk at Wednesday, June 28, 2017

I find Pence quite deplorable, and would recall that the Republicans on the House Judiciary Committee broke 2:1 (OK, 11:6) against impeaching Nixon. It's hard to imagine 20 Republican senators voting for impeachment, though I think Trump will resign or physically implode before that could happen.