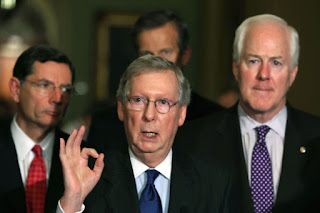 One thing that has been noteworthy about the Christofascist takeover of the Republican Party base is that as the power of the Christofascist has grown, so has the dishonesty of the Party.  Sadly, as a number of analyses of the Christofascists have shown, they have no compunction about lying.  Anything that furthers their theocratic, largely white supremacist agenda is perfectly fine in their minds.  The Commandment against lying is treated as if it simply doesn't exist.  The Senate GOP's health care "reform" bill underscores how Mitch McConnell - never one for truth and veracity - and his cronies have embraced the tactic of lying without shame.  A column in the Washington Post looks at the three big lies being marketed to the public at the moment by Senate Republicans. Here are highlights:

To succeed in gutting health coverage for millions of Americans, Senate Republican leaders need to get a series of lies accepted as truth. Journalists and other neutral arbiters must resist the temptation to report these lies as just a point of view. A lie is a lie.

Lie One: Democrats and progressives are unwilling to work with Republicans and conservatives on this issue. “If we went and got the single greatest health-care plan in the history of the world, we would not get one Democrat vote,” President Trump told an Iowa crowd last Wednesday.

In fact, Democrats, including President Barack Obama when he was in office, have said repeatedly that they would like to work with Republicans to improve the Affordable Care Act. Senate Democratic leader Charles E. Schumer’s office put out a list of such offers, including a June 15 letter from Schumer to Senate Majority Leader Mitch McConnell calling for a cross-party meeting to “find a way to make health care more affordable and accessible.”
This first lie is important because it rationalizes the Republican claim that the bill has to be draconian because it can’t pass without support from the party’s most right-wing legislators.

This brings us to Lie Two: This bill is primarily about improving health care for American families. No, this effort is primarily about cutting taxes. When it comes to health care, the main thing the bill does is take money away from providing it to pay for the tax reductions it contains and for future bonanzas the Republicans have promised.

The tax cuts in this legislation alone would amount to some $700 billion over a decade, according to the Center on Budget and Policy Priorities. About $33 billion of this would go to tax cuts conservatively averaging $7 million every year to each of the 400 highest-income families in the country. What could $33 billion buy? The CBPP reports it would be enough to pay for the expansion of Medicaid in Nevada, West Virginia, Arkansas and Alaska. Talk about income redistribution.

If this bill were truly about health care, Republicans would take all the tax cuts out and use that money to ease the pain their bill would cause. But they won’t, because the tax cuts are the thing that matters to them.

Lie Three: The Senate bill is a “compromise.” Really? Between whom? The House wants to destroy Obamacare quickly, the Senate a bit more slowly while also cutting Medicaid more steeply over time. This is only a “compromise” between two very right-wing policies.

I hope I never have to write about Lie Four, which would be Republican senators who surely know better — including Susan Collins, Dean Heller, Lisa Murkowski, Jeff Flake, Shelley Moore Capito and Rob Portman — justifying their votes for this monstrosity by claiming that it’s the best they could do. . . . . I would like to believe they are too decent for that. I hope I’m not lying to myself.

This is very frightening. I believe their goal is "Passive Genocide". Get rid of the poor, the sick, the elderly.....