Should We Just Let Appalachia Depopulate? 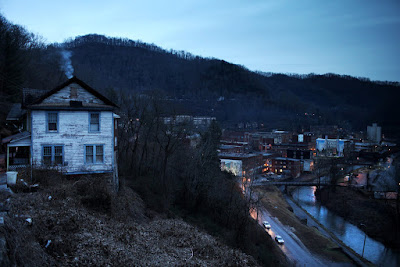 If there is any part of Virginia that is an economic basket case it is large swaths of Southwest Virginia that comprise a part of Appalachia.  Much of the economic malaise derives from the decline of the coal industry.  But much also comes, in my view, form the region's social backwardness and religious extremism that keeps new industry from entering the region.  The combined result is that young people are fleeing the region, leaving the region inhabited by an increasingly elderly and less educated population.   If Congressional Republicans have their way and gut Medicaid, the regions economy will be even more distressed as rural hospitals are forced to close and some of the few large non-coal related employers cease to exist.  Two editorial in the Roanoke Times - here and here - suggest that perhaps parts of Appalachia should be allowed to simple become depopulated.  The pieces recognize the reality that before the rise of the coal industry, the region was very sparsely populated. A few counties and small cities are trying to embrace education and woo new 21st century businesses. Many, however, are not and the downward spiral, if anything, is accelerating.  Here are  excerpts:

Here’s an uncomfortable question: Instead of trying to build a new economy in Appalachia, should we simply depopulate the place?

Mind you, that’s not a position we’re advocating. It does, however, make for a sobering thought experiment — one that has some important policy implications.

Here’s who got us thinking about this: A friendly fellow named Lyman Stone who issues some dire warnings. By day, he’s a cotton economist in Washington, concerned with the ups and downs of the global cotton trade. On the side, he runs a website called In A State of Migration, which tracks migration trends around the world. A native of Kentucky, he writes a lot about Appalachia. One of his posts — laden with charts and graphs and maps — shows population trends in Appalachia.

The basic point: Westward settlement mostly bypassed Appalachia, likely for the obvious topographic reasons. From 1800 to 1870, what he calls “the classic core of Appalachia — West Virginia, eastern Kentucky and Southwest Virginia — was mostly empty.

Then something happened. Coal happened. Railroads happened. People — many of them immigrants — poured into Appalachia. Roanoke was not the only boom town to spring up then. So did lots of other communities deeper in coal country.

Put another way, Appalachia was where the jobs were. Now it’s not.

First, coal-mining became more mechanized. People started moving out decades ago, long before the demand for coal dropped. The collapse of the coal economy has only accelerated that population exodus.

All but one of Virginia’s coal counties is smaller than it was in 1950, sometimes dramatically so.  . . . . And their populations will surely continue to decrease for two reasons, one economic, one demographic.

The economic reason: Last year marked the first time that coal was not the nation’s biggest energy source; natural gas surpassed it. Coal will not come back in any appreciable way. The demand of metallurgical coal — used in steel-making — may rebound some, depending on the economy. However, when utilities make decisions on new power plants, they’re looking decades ahead. They are putting their money into natural gas — hence, Dominion Energy’s interest in the Atlantic Coast Pipeline — and, to a lesser extent, renewables such as wind and solar. You can’t simply flick a switch and turn coal back on.

The demographic reason why coal counties will continue to lose population: It’s young adults who are leaving. Rural areas in general are getting older, but Appalachian counties even more so. . . . . There is not going to be a baby boom in the coalfields — so all these counties will simply get older and older, which means another way they lose population: Deaths outnumber births. All that’s old news, of course, just a backdrop for getting to this question: How much lower will Appalachia’s population drop? And should we really try to stop that?

So what is Appalachia’s economic future? There are certainly efforts to change the equation. Wise County is now rich with broadband Internet — thanks in part to investments by the state’s tobacco commission — and is now making a play for data centers. It’s already landed one. The University of Virginia’s College at Wise and the community college there are training students for drones and cybersecurity. There are similar efforts in eastern Kentucky to create what some are calling “Silicon Hollow.”

Trump has lifted environmental regulations on coal. This helps the coal economy in the short term, but does nothing to change its long-term trajectory in the marketplace. Meanwhile, he is trying to take away the few tools that Appalachia does have to remake its economy. Even with those tools, though, the challenge to create an economy to match its existing population is daunting.

Stone puts it in clinical terms: “The market equilibrium for Appalachian population may be even lower than the levels we see today. I know this will cause deep sadness for locals who long for recovery; and as someone who genuinely loves Appalachia, it does for me too. But we can’t let hopes blind us to realities. On some level, population must be associated with economic activity to support it. Coal mining is still declining, and when it’s completely gone, it’s not clear how much economic activity will remain, and therefore how much population can be sustained.”

So what is the solution - beside Appalachia dropping its religious extremism and bigotry towards those who are :other"?  The second o-ed suggests something abhorrent to many whites in Appalachia: immigrants.  Here are excerpts from that piece:

In most localities in Southwest Virginia, more people are dying than being born. In 2015, there were about 1,800 babies born in Virginia’s coalfields. But about 2,400 people died.

There is another solution, one that could repopulate the coalfields. It’s a policy that’s been proven to work elsewhere, but isn’t likely to be very popular in Southwest Virginia. Still, we’ll mention it anyway: Immigration.

One of the great ironies of our current political situation is that anti-immigration sentiment runs highest in rural areas, yet it’s rural areas that logically should be the loudest champions for increased immigration.

The United States is not Canada — a little matter in 1776 made sure of that — but there are some things we might learn from our northern neighbor. Rural Canada faces the same demographic pressures that rural America does, yet some Canadian communities have responded very differently.

Consider the case of Cape Breton, the northernmost part of Nova Scotia. It looks and feels a lot like Southwest Virginia — mountainous, with an economy that was once based on coal. Now the coal mines are shut down, and the population is declining. Sound familiar? The problem does but the solution doesn’t: Community leaders there are actively encouraging immigrants to settle in Cape Breton — and the leadership complains when their provincial and federal governments don’t do enough to direct immigrants there.

Not just Cape Breton either. The Calgary Herald recently looked at two small towns in what it called Manitoba’s “Bible Belt”: “In 2011, Winkler’s population stood at 10,700; Morden’s was 7,800. Both cities and the surrounding region have grown by more than 3,000 people since, thanks to immigration programs that have drawn people from all over the world.” The Herald said the two towns were now economically “booming,” as employers are enticed there by the larger talent pool of workers.

Canadians see more clearly than Americans that immigrants drive the economy, not slow it down. So what would it take to reverse the demographic collapse in the coalfields? A baby boom would help. So would increased immigration. Without one or both of those, the coalfields will continue to die, quite literally.

Build a wall and Appalachia will pay for it.
...
Maybe the telescamvelists can pay their fair share towards community renewal. Or maybe not.