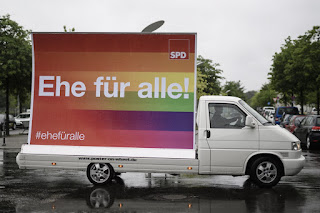 Germany's Parliament voted somewhat belatedly yesterday to doing the rest of modern Western Europe by legalizing same sex marriage.  As in America, same sex marriage has been used as a political football by politicians, including Chancellor Angela Merkel who moved to allow the vote even though she voted "no" on the measure.  Why?  Political expedience and the realization that blocking a vote could hurt her reelection prospects.  In Germany, religious groups, including child the rapist protecting Catholic Church, have opposed LGBT equality, clinging to a 12th century understanding of sexuality and sexual orientation.  Of course, it must be remembered that with notable exceptions, Germany's churches climbed aboard the Nazi train, seeking to retain power and wealth (the Vatican did the same thing in Italy with Mussolini).  The the parallel with America is that it is Germany's rural regions that have opposed marriage equality while modern urban areas, the economic dynamo of the economy, have favored it. The Washington Post reports on the development.  Here are excerpts:

Germany on Friday recognized the right of same-sex couples to wed, a major step for gay women and men living in a country split between conservative, Christian customs and modernizing forces.

The German Parliament voted 393-226 to modify the country’s civil code, reshaping the institution of marriage with little fanfare but enormous significance as Germany prepares to join much of the Western world in codifying marriage equality. After clearing a path for lawmakers to approve the measure, Chancellor Angela Merkel ultimately opposed it herself.

“It’s a joyous turning-point,” said Volker Beck, who has campaigned for gay rights for decades, as a spokesman for the Lesbian and Gay Federation in Germany before he entered Parliament as a member of the Green Party. “Equality and civil rights have been achieved.”

For some, the surprise was only how long it took, in a country often seen as a progressive model for the region. Notable, also, was how quickly the matter moved forward once it was brought up this week.

At issue was a web of dynamics, from Nazi-era repression to the way in which political parties have derived their power from religious groups. Over time, however, church attendance has waned, and polling suggests that a comfortable majority of the public supports same-sex marriage.

Since 2001, Germany has allowed civil partnerships, which afford many of the same benefits accruing to married couples, with the notable exception of the right to joint adoption.

Electoral pressures facing Merkel also appeared central, leading some gay Germans to wonder whether they were political instruments for the German leader running for a fourth term in September.

Marriage was becoming a wedge issue, and by easing her resistance, Merkel swept it away from her opponents. The Social Democrats, a center-left group forming part of the chancellor's governing coalition, had declared future cooperation contingent on same-sex marriage. Smaller parties on whom Merkel might depend should she be reelected in the fall, such as the Greens, said the same.

The chancellor has often made leftist causes, from wages to nuclear power, her own. In this case, however, she kept the issue at arm’s length. After enabling its consideration, which all but guaranteed passage, she ultimately voted no.

Her personal reservations could ease backlash from the conservative wing of her party, and from its Bavarian counterpart, the Christian Social Union, which is staunchly Catholic. The German Bishops’ Conference opposed the vote in a statement condemning the “hasty procedure” for overriding the “Christian concept of marriage.”

The uneasy advancement of gay people in the E.U.’s largest country reflects vast social differences within Germany, as well as its tortured past.

“Berlin and some of the conservative villages in the south of Germany — they exist on different planets,” said Andreas Kraß of the Center for Transdisciplinary Gender Studies at the Humbold University in Berlin.

It was in Berlin that the gay rights movement began at the turn of the 20th century, with the founding of the first gay rights organization, said Robert Beachy, author of “Gay Berlin: Birthplace of a Modern Identity.”

But the capital wasn’t “back in its glory,” he said, until reunification in 1990, as homosexuality was as dangerous in the postwar period as it had been under the reign of the Third Reich. Just last week, Parliament voided convictions under an anti-sodomy law sharpened by the Nazis and then preserved by West Germany.

The much welcomed vote represents another much deserved defeat for the Catholic Church and other denominations that continue to base their beliefs on hatred of others and the embrace of ignorance.  I continue to believe that religion, especially  conservative Christianity and fundamentalist Islam, are net evils in the world.  The world and humankind would be better off if they both ceased to exist.