Russian Hackers Sought to Get Clinton Emails to Mike Flynn 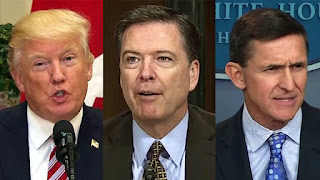 If one wonders why Der Trumpenführer is so obsessed with shutting down the FBI investigation of Trump BFF Mike Flynn, stories in New York Magazine and Talking Points Memo look at efforts of Russian hackers working on Vladimir Putin's personal orders sought to collaborate with Flynn and to hinder Hillary Clinton's electoral chances. Trump may be trying to use the ruse of voter fraud to distract his knuckle dragging supporters, but the real story remains that of what collusion and attempted collaboration went on between Russian operatives and the Trump campaign and Trump advisers.  Remebr, Trump more or less admitted that he fired James Comey because of the FBI investigation of Mike Flynn.  First these highlights from the New York Magazine piece:

During the 2016 campaign, Russian hackers discussed how to obtain emails from Hillary Clinton’s private server — and, then, transmit them to Trump campaign advisor Michael Flynn, according to intelligence reports reviewed by U.S. officials.

Meanwhile, a longtime Republican opposition researcher organized a campaign to access the emails that Clinton had deleted from that server — emails that he believed Russian hackers had gotten hold of. This GOP operative, Peter W. Smith, told multiple friends and potential “recruits” that he was working with Flynn on the email project.

These bombshells were brought to you by the Wall Street Journal’s Shane Harris, who interviewed Smith on May 4 — 10 days before the 81-year-old died. Here’s Harris’s summary of Smith’s efforts:

His project began over Labor Day weekend 2016 when Mr. Smith, a private-equity executive from Chicago active in Republican politics, said he assembled a group of technology experts, lawyers and a Russian-speaking investigator based in Europe to acquire emails the group theorized might have been stolen from the private server Mrs. Clinton used as secretary of state. …In the interview with the Journal, Mr. Smith said he and his colleagues found five groups of hackers who claimed to possess Mrs. Clinton’s deleted emails, including two groups he determined were Russians. “We knew the people who had these were probably around the Russian government,” Mr. Smith said. …Mr. Smith said after vetting batches of emails offered to him by hacker groups last fall, he couldn’t be sure enough of their authenticity to leak them himself. “We told all the groups to give them to WikiLeaks,” he said. WikiLeaks has never published those emails or claimed to have them. Smith said that he worked independently of the Trump campaign, and declined to tell the Journal whether the retired general was involved in his project.

However, the paper obtained a great deal of evidence that, at the very least, Smith led people to believe he was working for the Republican nominee’s senior adviser.

“He said, ‘I’m talking to Michael Flynn about this—if you find anything, can you let me know?’” said Eric York, a computer-security expert from Atlanta who searched hacker forums on Mr. Smith’s behalf for people who might have access to the emails. …In one Smith email reviewed by the Journal, intended to entice outside experts to join his work, he offered to make introductions to Mr. Flynn’s son, Michael G. Flynn, who worked as chief of staff in his father’s company. Mr. Smith’s email mentioned the son among a small number of other people he said were helping. Michael G. Flynn didn’t respond to a request for comment.
In another recruiting email seen by the Journal, Jonathan Safron, a law student Mr. Smith described as a close colleague, included links to the websites and LinkedIn profiles of people purportedly working with the Smith team. At the top of the list was the name and website of Flynn Intel, which Mr. Flynn set up after his 2014 firing as director of the Defense Intelligence Agency. Harris’s report represents the most compelling evidence, to date, that Trump campaign associates colluded with Russian hackers to steal Clinton emails. The specific emails that Smith was targeting — ones sent by Clinton over a private server as secretary of State — were never leaked to the public by hackers. Rather, Russian agents hacked the email accounts of the Democratic National Committee and Clinton campaign chair John Podesta.

At the time Smith began his operation, the DNC emails had already been leaked.

It’s worth noting that Smith is not, necessarily, the world’s most trustworthy source. Among the GOP operative’s past endeavors were efforts to publicize sensational — and unverified — charges that, while governor of Arkansas, Bill Clinton instructed his body guards to procure women for him to have sex with. Smith also drummed up rumors that Clinton had an illegitimate child.

The Journal story does not establish that Flynn was working on this effort — only that Smith said he was. It’s true that the intelligence reports cited in Smith’s story suggest that Russian hackers believed Flynn wanted them to send him emails. But if Smith were falsely informing hackers that he was affiliated with Flynn, it’s conceivable that those conversations could have transpired despite Flynn having no role in the project.

Eric York, one computer security expert who said he searched hacker forums on Smith’s behalf to try to dig up the emails, told the Journal.

What Smith hoped to unearth were the 33,000 emails that Clinton has said she deleted from her private email server because they were personal in nature, and which Trump infamously urged Russia to find and release during a July 2016 campaign rally.

Trump and his defenders in the media and his administration have referred to the federal investigation into Russia’s interference in the 2016 election as a “witch hunt” intended to hurt his presidency. They insist there is no evidence of collusion between Russian operatives and Trump campaign associates.

Smith acknowledged that the emails, if they existed, would likely have been hacked by Russian operatives. He ultimately received some emails from hacker groups prior to the election, he told the Journal, but urged those groups to pass the emails along to WikiLeaks so he would not have to personally vouch for their authenticity. Those emails have never surfaced, according to the report.

With all this smoke, it is increasingly difficult to believe that there wasn't real fire in the collusion effort.  If Trump had nothing to hide, why did he fire Comey and try to impede the investigation?
Posted by Michael-in-Norfolk at Friday, June 30, 2017