Pence to Hate Group: You Have President Trump’s "Unwavering Support" 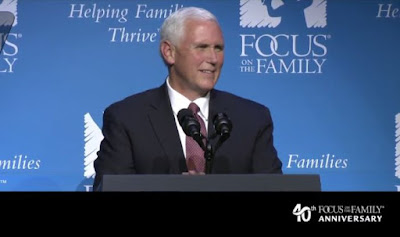 Much of Der Trumpenführer presidential campaign focused on fomenting racial hatred among white voters and pushing the Christofascists' agenda of placing them above the law under the smoke screen of "religious freedom" - religious freedom for them and no one else.  Since taking office, Trump has sought to deliver on his promises to the Christofascists - numerous anti-gay executive actions and promises of special rights for churches - even as he breaks promises right and left on everything else, not the least, his promises that millions would not lose their health care coverage.  Both the Republican House bill and now the Republican Senate bill which Trump is lauding demonstrate just how big Trump's lie was in fact.  But back to the Christofascists.  Mike Pence recently attened a gathering of religious extremists at Focus on the Family - an anti-gay hate group with strong white supremacist leanings - and reassured them that they have an unwavering ally in Der Trumpenführer.  Here are highlights from LGBT Nation:

Vice President Mike Pence spoke at an event in Colorado today honoring the work of an anti-LGBTQ organization Focus on the Family at a celebration of its 40 year anniversary.

Pence was then welcomed to the stage, alongside his wife Karen Pence.

Pence congratulated the organization on 40 years of work, and promised them that “you have an unwavering ally in President Donald Trump.”

“He was excited that I was coming here today and wanted me to give you all his thanks and regards,” Pence added to applause.

Pence called Focus on the Family a “cornerstone of American life for so many Americans” and called its founder, James Dobson, on whose radio program he appeared during the presidential campaign, a “friend and mentor to me.”

When Pence wasn’t talking up the work of Focus on the Family, he was promoting the administration’s agenda, and presenting Trump as a president who was one of them.
He pointed to the president’s words at the National Prayer Breakfast, where he spoke of the importance of so-called “religious freedom,” so often used as a license to discriminate against the LGBTQ community.

Pence also noted Trump’s signing of an executive order going after the Johnson Amendment, which prevents nonprofits, including churches, from politicking for any particular candidate or party.

He asked those in attendance to rally behind the health care bill, to help get it “across the finish line.”  “While discussions will continue, let me be very clear that the president and I are very supportive of the Senate bill,” he added.

The Senate bill would make deep cuts to Medicaid, putting the lives of many at risk, including those living with HIV/AIDS.

To make matters worse, Trump’s proposed budget would cut $300 million from HIV/AIDS funding. The president’s obvious apathy on the issues led to six members of the Presidential Advisory Council on HIV/AIDS (PACHA) to quit in protest.