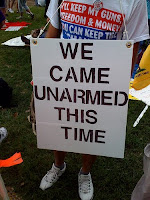 There are times when I ask myself WTF has happened to the Republican Party? Years ago when I was active in the GOP, the party stood for fiscal responsibility and reasonable, responsible small government. Now? Fiscal insanity - and insanity in general - are prerequisites to membership in the GOP. Today, Standard and Poors ("S&P") downgraded the outlook for U.S. issued securities - e.g., Treasury bonds, etc. - because of the refusal of Congress to responsibly address the nation's budget deficit. When I say "responsibly" I mainly am targeting the Republican Party which wants more and more tax cuts for extremely wealthy Americans (who as noted below, are paying historically low tax rates) and corporations which will only further exacerbate the budget deficit. One can only hope that independents and moderates will open their eyes and wake up to the fact that the current GOP will be the ruin of this country if people do not wake up to the extremism of the GOP and its base. Here are highlights from the New York Times:
*
Washington’s deficit reduction debate came to Wall Street on Monday, after the Standard & Poor’s rating firm lowered the outlook for the United States to negative, saying there was a risk that lawmakers might not reach agreement on how to address the country’s fiscal issues.
*
Indexes fell sharply as the S.&P. revision pushed the federal deficit problems out of the political arena and into the financial one. By noon, Wall Street indexes were down at least 1.6 percent in afternoon trading as bond prices rose and yields declined.
*
Many analysts were surprised by the market response to the revision, which cut the long-term United States debt rating to negative from stable.
*
Stanley Nabi, chief strategist at Silvercrest Asset Management Group, said the policy makers and lawmakers should “realize there is a very serious problem, and you are going to see more consideration on how to rein in expenditures.”
*
For their part, administration officials played down the revision while reiterating Washington’s determination to act. Treasury officials “believe S.&P.’s negative outlook underestimates the ability of America’s leaders to come together to address the difficult fiscal challenges facing the nation,” an assistant secretary for financial markets, Mary J. Miller, said in a statement.
*
As I noted, while the GOP continues to pretend that tax rates are high, the real truth is quite the opposite (I guess the Christianist control of the GOP has Congressional Republicans thinking that they are now exempt from the Commandment against lying and bearing false witness just like the Christianists themselves). Indeed, tax levels at the highest brackets are at the lowest level since the 1950's - that's right 60 years. Here are highlights from the Virginian Pilot on the real story on tax rate levels:
*
The Internal Revenue Service tracks the tax returns with the 400 highest adjusted gross incomes each year. The average income on those returns in 2007, the latest year for IRS data, was nearly $345 million. Their average federal income tax rate was 17 percent, down from 26 percent in 1992.
*
Over the same period, the average federal income tax rate for all taxpayers declined to 9.3 percent from 9.9 percent.
*
The top income tax rate is 35 percent, so how can people who make so much pay so little in taxes? The nation's tax laws are packed with breaks for people at every income level. There are breaks for having children, paying a mortgage, going to college, and even for paying other taxes. Plus, the top rate on capital gains is only 15 percent.
*
There are so many breaks that 45 percent of U.S. households will pay no federal income tax for 2010, according to estimates by the Tax Policy Center, a Washington think tank.
*
In all, the tax code is filled with a total of $1.1 trillion in credits, deductions and exemptions, an average of about $8,000 per taxpayer, according to an analysis by the National Taxpayer Advocate, an independent watchdog within the IRS.
Posted by Michael-in-Norfolk at Monday, April 18, 2011