Yet Another Poll Shows Majority Support for Gay Marriage - So Why Are Christianists Still Getting Special Rights? 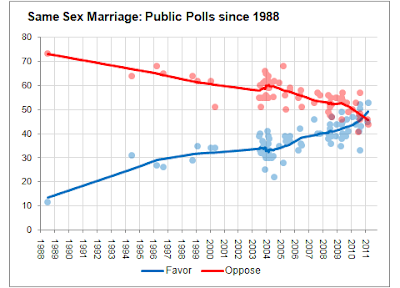 Numbers guru Nate Silver has a piece in the Washington Post (source of the chart) that looks at not only the latest CNN poll that shows that anti-marriage are now in the minority, but also the clear trend line that shows that religious based bigotry against gays is losing adherents. Yet spineless elected officials and government bureaucrats - e.g., the as*holes on the board of the Virginia Department of Social Services - continue to enshrine anti-gay religious beliefs and bigotry in the public laws and regulations. Can't anyone else see that we are implementing a Christianist version of Sharia law in this country in far too many states and in laws such as DOMA? It makes me sick. And yes, it makes me despise Christianists who apparently can only feel good about themselves while denigrating and dehumanizing others. Personally, I view them as a foul cancer on society and an affront to the principles on which this nation was actually founded no matter how much liars like David Barton try to rewrite history. Here are highlights from Nate's piece:
*
A poll from CNN this week is the latest to show a majority of Americans in favor of same-sex marriage, with 51 percent saying that marriages between gay and lesbian couples “should be recognized by the law as valid” and 47 percent opposed. This is the fourth credible poll in the past eight months to show an outright majority of Americans in favor of gay marriage.
*
As we noted last August, support for gay marriage seems to have been increasing at an accelerated pace over the past couple of years. [Above] is an update to the graph from last year’s article, which charts the trend from all available public polls on same-sex marriage going back to 1988.
*
[O]pponents of gay marriage almost certainly no longer constitute a majority; just one of the last nine polls has shown opposition to gay marriage above 50 percent.
Gay marriage advocates still face some challenges, however. . . . . [T]he people who turn out to vote are considerably older than the population as a whole, so gay marriage will not perform quite as well at the ballot booth as in surveys of the general population. In addition, whenever a position is gaining ground, its newly won support is often tentative and can be peeled away by an effective counter-campaign.
*
But Republican candidates, who have placed less emphasis on gay marriage in recent years, probably cannot expect their opposition to it to be a net electoral positive for them except in select circumstances. If support for gay marriage were to continue accelerating as fast as it has in the past two years, supporters would outnumber opponents roughly 56-40 in the general population by November 2012.
*
But this does put Republicans in a tricky position. Their traditional position on gay marriage is becoming less popular. But to the extent they disengage from the issue, they may lose even more ground. One way to read the trends of the past few years is that we have passed an inflection point wherein it is no longer politically advantageous for candidates to oppose same-sex marriage, which in turn softens opposition to it among the general public, creating a sort of feedback loop and accelerating the trend.
Posted by Michael-in-Norfolk at Thursday, April 21, 2011

Hey that's okay, that just means the Christianists will have to change their rhetoric from patriotic claims of majority to religious claims of martyr-like minority, the lone voice in the wilderness and whatnot.