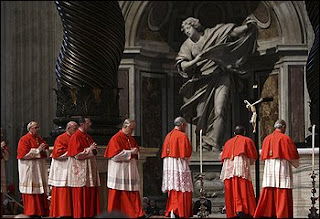 I have never been one to handle criminal law matters because I do not want to put myself in the position of defending an individual who I believe is guilty. Morally, I simply do not want to compromise my integrity. True, even the guilty are entitled to a defense. I simply could not effectively represent someone who I believed deserved to be punished for their crimes. On occasion a similar moral dilemma can arise in the civil law context where a party that is guilty of morally bankrupt behavior seeks to be defended from much deserved consequences of their actions. Sometimes the client in that setting is an individual is a single person. Other times it's a corporation or institution. This is the role now facing Jeffrey Lena, the attorney defending Pope Benedict XVI from a deposition motion in a case involving child abuse by clergy in a suit pending before the U.S. Supreme Court. The facts revealed to date make it clear that Benedict XVI and his less than saintly predecessor were up to their eyeballs in the cover up of sexual abuse by predator priests. Now Lena is working to protect the Vatican from the consequences of its disgusting behavior and actions in this case and many others. In the sex abuse related cases, in my view, true justice dictates that he hopefully is not successful. Here are highlights from the Washington Post:
*
Lena is arguing that the Vatican cannot be tried for transferring a predatory priest from Ireland to Oregon. In Mississippi, he is defending the Vatican against accusations that it participated in a money-laundering scheme. In New York, Lena is defending the Holy See in a commercial-licensing dispute about the use of images belonging to the Vatican Museums. Wherever it is in the United States that the Vatican stands accused, Lena is there to protect it.
*
Victims' groups say Lena's deft navigation of legal loopholes is anathema to an institution built on the revelation of truth. But Vatican supporters say he is effective, and that his immunity defense has broader applications for international law beyond the current scandal. What is clear is that through his newly voluble response to media inquiries about the Vatican's actions, the down-to-earth lawyer has emerged as the pope's de facto spokesman.
*
In 2002, the abuse victims' lawyer Jeff Anderson brought John V. Doe v. the Holy See in Portland, Ore. After many years of litigation, the 9th Circuit Court of Appeals ruled that Vatican did not have blanket immunity under the Foreign Sovereign Immunity Act because of an exception for harm suffered at the hand of a foreign entity in the United States.
*
In 2005, abuse victims filed a putative class action lawsuit in Kentucky, which does not have the burden of proving that priests are employees of the Vatican. In that case, the plaintiffs are trying to show that negligent bishops, in their capacity as Vatican officials, caused injury on U.S. soil by failing to report predatory priests to civilian authorities.
*
Last month, Lena filed documents with the U.S. District Court in Louisville claiming that the pope is immune from the jurisdiction of United States courts because he is the head of a sovereign state; Lena also is claiming that American bishops are not employees of the Vatican. Lena also will dispute that the 1962 church policy required clerics to keep sex abuse cases secret from civil authorities.
*
Since then, the clerical abuse that Benedict has lamented as "filth," and the resulting lawsuits that many prefects in Rome once considered endemic to a uniquely "litigious" American culture, is now at the doors of St. Peter's. According to several church insiders, Lena has expressed frustration that Vatican officials in Rome have failed to get the church's point across clearly, that too many cardinals were chiming in off-message and that the church had to speak out more because the lawyers on the other side were speaking out.
*
Again, I could not in good conscience defend individuals who are so clearly involved in protecting monsters who raped and violated thousands of children and youths. Indeed, in some respects the Mafia looks to be a pillar of integrity and honor compared to the Vatican and the Catholic Church hierarchy.
Posted by Michael-in-Norfolk at Monday, April 19, 2010

Racketeering charges should be pressed against a cabal not unlike (and not unassociated with!) the Mafia here. And soon the pope will not be able to leave his "state" without risking arrest for collusion and being an accessory after the fact of multiple crimes in multiple countries.