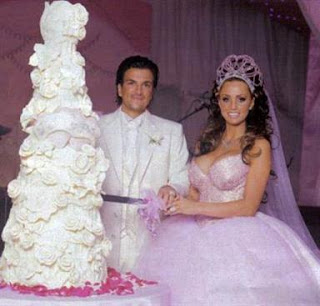 As the Christianists and professional Christian set continue to spread deliberate lies and endeavor to sow hysteria as they go all out to turn back marriage rights in Maine and partnership rights in Washington State, a new Pew Forum shows that evangelical Christians have a real problem with their own marriages. Problems that have absolutely nothing to do with same sex marriage. Indeed, these sanctimounous bigots divorce more frequently than even - oh my God, the horror - atheists. It certainly seems to me that perhaps they ought to be more focused on their own dysfunctional marriages and stop trying to deny civil rights to same sex couples. Or could it just possibly be that these sanctimonious folks are afraid that us homos and lesbos might just do a better job at marriage and exhibit a better pattern of monogamy and enduring relationships? Here are some highlights from Time's story on this phenomenon:
*
The [U.S. Senator John] Ensign story continues to reverberate not because of its delicious best-friend's-girl plotline (for who among us is surprised anymore that politicians sleep around?), but because he said he stood for something else. He is a "family values" Republican who voted for the impeachment of Bill Clinton and in 2004 lent his support to a constitutional amendment defining marriage, saying, "Marriage is an extremely important institution in this country, and protecting it is, in my mind, worth the extraordinary step of amending our Constitution." . . . Ensign has become the latest example of what so many see as the failure of the right to retain any credibility on the marriage question.
*
No one denies that conservative Christians have a marriage problem, a dizzying gap between their articulated ideals and their success in achieving them. According to the Pew Forum, evangelicals are more likely to be divorced than Roman Catholics, Mormons, the Eastern Orthodox, Muslims, Jews, Hindus, and atheists. Of course, every person who utters "till death do us part" and then separates is, in a sense, conceding defeat. But when evangelicals are leading the charge in the marriage movement (and now, the anti-gay-marriage movement) arguing that sacred unions between one man and one woman are good for society because they're good for children, one would hope that they'd have worked out the kinks a little better than the rest of us.
*
Too bad more folks in the MSM are not talking about this incredible hypocrisy on the part of those who seek to deprive others of civil legal rights. Instead of mindlessly providing platforms for the likes of Maggie Gallagher, the talking heads ought to be grilling her on this situation.
Posted by Michael-in-Norfolk at Monday, October 12, 2009

Look at the jugs on that one will ya.

Yeah the groom's cute too.

Advantages of putting the B in LGBT !