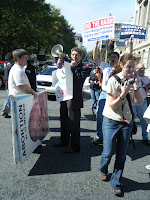 The only unpleasant moments at the National Equality March yesterday occurred shortly after the beginning of the March when the boyfriend and I found ourselves face to face with hate merchant extraordinaire and murder advocating anti-abortion loon Randall Terry (at left). Terry was yelling nastily at marchers with a megaphone and calling us freaks and sinners. Quite a few of us had words with this man and even the boyfriend yelled back at Terry - who I deem to be one of the leading false Christians today which is quite an accomplishment given the number of vile professional Christians one encounters. Other than this unexpected face to face encounter, the entire mood yesterday was one of determination and good cheer. The ONLY hateful language we heard all day came from Mr. Terry - something that is all too typical of the most visible Christianists.
*
In contrast, retired Anglican Archbishop Desmond Tutu had a beautiful letter read at the March in full support of full LGBT equality both within and outside of the Church.
Posted by Michael-in-Norfolk at Monday, October 12, 2009

Glad you boys had a good time and thousands of others left your footprint in another chapter of Gay Activism.