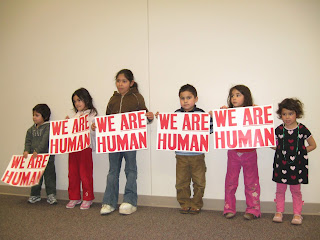 Unless one is of 100% Native American descent, everyone of us in America is an immigrant and our ancestors often came to the New World to escape danger, discrimination, or religious persecution.  In a sense they were refugees seeking safety and better opportunity. Sadly, the ancestors of many, if not most, African Americans were forcibly brought to America, their families torn asunder in the process and then they faced being treated as chattel property.  This, combined with the genocide against  Native Americans are the two original sins of America - the ugly underbelly that flag waving self-anointed "patriots" conveniently forget.   Now, the Trump/Pence regime is adding another chapter of evil to America's record through its treatment of refugees arriving at the southern border.  Disturbingly, his strongest supporters are white Christian nationals who underscore just how hideous conservative Christianity has become. Trump is not only committing daily lies but he and the always reprehensible Jeff Sessions are killing America's soul and basic human decency.  A column in the New York Times takes a look at what is being done in the name of every American citizen.  It is ugly and it is evil, plain and simple.  Worse yet, I believe racism against non-whites is the lynch pin behind it all. "Christians" who support this ought to save all of us from the display of hypocrisy of them parking their despicable assess in church pews on Sunday mornings. Here are column excerpts:


We as a nation have crossed so many ugly lines recently, yet one new policy of President Trump’s particularly haunts me. I’m speaking of the administration’s tactic of seizing children from desperate refugees at the border.

“I was given only five minutes to say goodbye,” a Salvadoran woman wrote in a declaration in an A.C.L.U. lawsuit against the government, after her 4- and 10-year-old sons were taken from her. “My babies started crying when they found out we were going to be separated.”

“In tears myself, I asked my boys to be brave, and I promised we would be together soon. I begged the woman who took my children to keep them together so they could at least have each other.”

This mother, who for her protection is identified only by her initials, J.I.L., said that while in El Salvador she was severely beaten in front of her family by a gang, and she then fled the country to save the lives of her children.

J.I.L. noted that she had heard that her children might have been separated and sent to two different foster homes, and added: “I am scared for my little boys.”

Is this really who we are? As a parent, as the son of a refugee myself, I find that in this case Trump’s policy has veered from merely abhorrent to truly evil.

Family separations arise in part because of the new Trump administration policy, announced last month, of “zero tolerance” for people who cross the border illegally. That means that parents are jailed (which happened rarely before), and their kids are taken away from them.

Mirian, a Honduran woman who arrived in the U.S., broke no law. She simply followed the established procedure by presenting herself at an official border crossing point and requesting asylum because her life was in danger in Honduras — nevertheless, her 18-month-old was taken from her.

“The immigration officers made me walk out with my son to a government vehicle and place my son in a car seat in the vehicle,” Mirian said in a declaration accompanying the A.C.L.U. suit. “My son was crying as I put him in the seat. I did not even have a chance to comfort my son, because the officers slammed the door shut as soon as he was in his seat.”

Likewise, Ms. G, a Mexican in the A.C.L.U. suit, went to an official border crossing point and requested asylum with her 4-year-old son and blind 6-year-old daughter. None of them had broken American law, yet the children were taken from their mother.

But even for those parents who commit a misdemeanor by illegally entering the U.S. — because they want to protect their children from Central American gangs — the United States response seems to be in effect to kidnap youngsters.

If you or I commit a misdemeanor, we might lose our kids for a few days while we’re in jail, and then we’d get them back. But border-crossers serve a few days in jail for illegal entry — and after emerging from criminal custody, they still don’t get their kids back soon, said Lee Gelernt, an A.C.L.U. lawyer. In one case, he said, it has been eight months and the child still has not been returned.

It’s true that immigration policy is a nightmare, we can’t take everyone and almost no one advocates open borders. . . . Yet none of that should be an excuse for brutalizing children by ripping them away from their parents.

So what’s next, Mr. President? Minefields at the border would be an even more effective deterrent. Or East German-style marksmen in watch towers to shoot those who cross?
We as a nation should protect our borders. We must even more assiduously protect our soul.

When the husband and I travel to Europe in September, we will likely have to explain repeatedly that (i) we opposed Trump's election, and (ii) the majority of Americans oppose the immorality of his regime's brutal policies.  Right now, I am ashamed to be an American.
Posted by Michael-in-Norfolk at Thursday, May 31, 2018