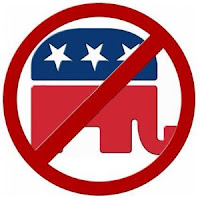 For years now I have been saying that the only way to stop the anti-democratic, enrich the already rich agenda of the Republican Party is to vote for Democrats in every election possible.  Only in the face of sustained electoral defeat will the GOP modify its increasingly extreme and harmful agenda and maybe finally eject the white Christian extremists and white supremacists from the party who in a large party have set the stage for not only the election of Donald Trump but also a world and political view where lying is completely acceptable.  The 2018 midterm elections and other state level elections in November provide the most critical chance to stop the toxicity and, in my view, destruction of the country.  As a column in the New York Times notes, "vote for a Democrat, any Democrat."   It is the only way to stop the Trump/GOP agenda that is harming a majority of Americans.  Remember that only around 27% of registered voters put Trump in office.  Huge numbers of Americans failed to vote.  Its time for a high voter turnout to end the madness. Here are column excerpts:

With the primary season winding down and the midterms soon upon us, it’s time to point out that this election is not about what you may think it’s about. It is not a choice between the particular basket of policies offered by the candidates for House or Senate in your district or state — policies like gun control, right to choose, free trade or fiscal discipline. No, what this election is about is your first chance since 2016 to vote against Donald Trump.

As far as I am concerned, that’s the only choice on the ballot. It’s a choice between letting Trump retain control of all the key levers of political power for two more years, or not.

If I were writing the choice on a ballot, it would read: “Are you in favor of electing a majority of Democrats in the House and/or Senate to put a check on Trump’s power — when his own party demonstrably will not? Or are you in favor of shaking the dice for another two years of unfettered control of the House, the Senate and the White House by a man who wants to ignore Russia’s interference in our election; a man whose first thought every morning is, ‘What’s good for me, and can I get away with it?’; a man who shows no compunction about smearing any person or government institution that stands in his way; and a man who is backed by a party where the only members who’ll call him out are those retiring or dying?”

If your answer is the former, then it can only happen by voting for the Democrat in your local House or Senate race.

[W]hat we’ve learned since 2016 is that the worst Democrat on the ballot for the House or Senate is preferable to the best Republican, because the best Republicans have consistently refused to take a moral stand against Trump’s undermining of our law enforcement and intelligence agencies, the State Department, the Environmental Protection Agency, the Civil Service, the basic norms of our public life and the integrity of our elections.

These Republicans have made the craven choice to stand with Trump as long as he delivers the policies they like on tax cuts, gun control, fossil fuels, abortion and immigration, even though many privately detest him.

[U]nderstand that as long as Trump is president, he’s unlikely to sign any legislation a Democratic majority in Congress would pass — but that’s not their job for the next two years. Their job is to protect America from Trump’s worst impulses.

Their job is to get hold of at least one lever of power — the House or the Senate — in order to oust the most corrupt Republican lawmakers who lead key committees, to properly oversee the most reckless cabinet secretaries, like Scott Pruitt, and to protect the F.B.I., the Justice Department and Robert Mueller from Trump’s intimidation.

I’m not a card-carrying Democrat. I favor free trade, fiscal discipline, pro-business regulations, a democracy-expanding foreign policy, and I have an aversion to identity politics.

But all of that is on hold for me now, because something more fundamental is at stake: It’s not what we do — it’s who we are, how we talk to one another, what we model to the world, how we respect our institutions and just how warped our society and government can get in only a few years from a president who lies every day, peddles conspiracy theories from the bully pulpit of the White House and dares to call our F.B.I. and Justice Department a “criminal deep state” for doing their job.

[Democrats] can, and must, out-organize him, out-run him [Trump], out-register him and out-vote him. Nothing else matters now.

Democrats can’t count on winning by just showing up. They still have to connect with some centrist and conservative voters. . . . In the end, I don’t want to see Trump impeached, unless there is overwhelming evidence. I want to see, and I want the world to see, a majority of Americans vote to curtail his power for the next two years — not to push a specific agenda over his but because they want to protect America, its ideals and institutions, from him — until our next presidential election gives us a chance to end this cancer . . . .

Again, this is Code Red: American democracy is truly threatened today — by the man sitting in the Oval Office and the lawmakers giving him a free pass.


All of us can do our part be it volunteering, providing housing for a Democrat candidate staffer - something the husband and I have done before and may do again this year - and making a small campaign contribution.  Most importantly, be registered to vote and get to the polls and encourage family and friends to do so as well and make the see who critial voting is this November.
Posted by Michael-in-Norfolk at Wednesday, May 30, 2018