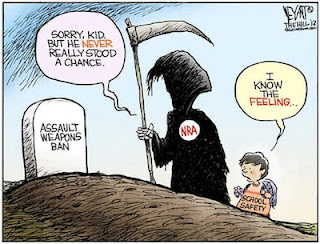 In what ought to become standard practice, the parents of one of the victims of the Santa Fe, Texas, school shooting has filed suit against the parents of the shooter who used weapons belonging to his parents.  Weapons that obviously were not property secured and should not have been where a minor could access them.  If politicians lack the balls to buck the NRA, then civil lawsuits may be the means to force change.  If there are enough such lawsuits, just as insurance companies will refuse to issue policies to owners of certain dog breeds, so too insurance carriers might in time refuse to issue insurance policies to gun owning homeowners.  Suits against gun shops that sell weapons to shooters might accomplish a similar effect.  Of course, repealing immunity laws for gun manufacturers could likewise cause a major change in the availability of guns in American homes.  Here are highlights from CBS 21 in Dallas:

The family of one of the students killed in a Texas high school shooting filed a lawsuit against the alleged gunman’s parents, claiming the shooter’s father didn’t properly secure the weapons and were negligent in entrusting him with firearms.

Investigators said Pagourtzis used a shotgun and pistol belonging to his father that had been kept in a closet.

Texas law states that guns can’t be made accessible to children under 17, with exceptions such as hunting or when under parent supervision. Parents can be charged with a misdemeanor punishable by up to one year in jail and $4,000 in fines if the child fires the weapon and causes serious injury or death.

Christopher Stone and Rosie Yanas, whose son Chris Stone, 17, was killed, filed a lawsuit in Galveston County on Thursday. Stone’s funeral was Friday.

The lawsuit also argued that Pagourtzis’ parents didn’t obtain mental health counseling for their son and didn’t warn the public about his “dangerous propensities.” Dimitrios Pagourtzis posted a photo of a T-shirt emblazoned with the phrase “Born to Kill” on social media, and Gov. Greg Abbott has said the teenager had journals with writings indicating he planned the attack.

Pagourtzis family attorney Nicholas Poehl said he only represents them in the criminal case against the son and declined comment on the civil lawsuit. He did not know when the family would have attorney in the civil matter.

The lawsuit is not the first of its kind following a mass shooting.

Most recently, the family of one of the four people killed in a shooting at a Waffle House restaurant in Nashville, Tennessee, sued the suspected gunman’s father, accusing the Illinois man of negligence. In that case, police said the gunman had displayed signs of mental illness before his Illinois gun card was revoked in 2017. His guns were transferred to his father, but police said the father returned them to his son at some point.

Texas law requires gun owners to “take steps that a reasonable person would take to prevent the access to a readily dischargeable firearm by a child, including but not limited to placing a firearm in a locked container or temporarily rendering the firearm inoperable by a trigger lock or other means.”

[Texas Governor] Abbott, a staunch supporter of gun rights, said this week he’s open to strengthening laws on gun storage and reporting lost or stolen weapons. But that suggestion is already drawing resistance from some gun rights lawmakers who said they would resist efforts for more government control of what happens inside the home.