The Catholic Church's Accelerating Collapse in the Developed World 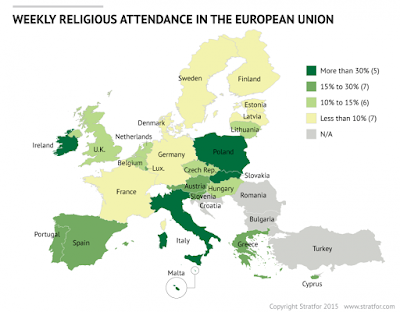 While arch-conservatives - extremists, if you will - in the Catholic Church reel from the Irish vote to repeal that nation's strict bans on abortion, the Church is not faring well in other parts of Europe.  Indeed, the only semi-bright spot is Poland where politicians are using Catholicism as part of the white Polish nationalist agenda. In America, Catholic Church membership is ostensibly holding steady for at least two reasons: (i) unless one actively takes them self off of church rolls, you remain in the headcount forever, and (ii) the huge influx of Hispanic immigrants is masking the decline of the traditional American Catholic demographic. The bad news for the Church is that younger Hispanics are leaving the Church like their Millennial counterparts, thus making it crucial for additional new immigrant to fill the places being left by those leaving the Church. Why the global collapse of the Church outside of the developing world?  A piece in the New York Times notes two causes: (a) the sex abuse scandal that shows no signs of going away, and (b) the Church's refusal to embrace modern knowledge and science, especially in the realm of sexuality.  The latter phenomenon is exemplified by right wing Catholics at sites such as "Lifesite" and "Church Militant" rallying to "experts" deemed crackpots by sane, mainstream medical and mental health experts.  The Irish Times looked at one of these, in my view, nutcase "experts." Here are excerpts:

Dutch psychologist Dr Gerard van den Aardweg. . . . said: “Homosexuality is presented by the majority of the media as a question of unjust discrimination of people who in themselves are just a little bit different by nature ... denied rights the majority enjoy. This is absolutely absurd and completely nonsensical.” The event was organised by the Catholic Alliance for the Defence of the Family and Marriage group.

Global organisations with a global sexual ideology wanted “to deal a blow to normal marriage and the family and to this end they use the homosexual movement, the sexual rights movement”, he said. . . . He claimed many scientific institutions have been taken over by “active militant gays” who produce information to further the gay cause. He also said it was not true that homosexuals are born gay.

Many gay people were “comparable with alcoholics or other persons who are addicts but they have the feeling it’s my fate”, he said. . . . He also claimed the Nazi party was “rooted” in homosexuals. . . . . He said wealthy organisations were interested in imposing homosexuality on the world and included the abortion movement, feminism, and freemasonry international.”

It used to be evangelical groups that trotted out such "experts," but increasingly the Catholic Church is embracing such extremists.  It's little wonder Millennials in particular are exiting from the Church.

But back to the Times piece.  Here are highlights on the Church's collapse in Europe and accelerating drift toward ultimately being Africa centric:

In August, Pope Francis will return to Ireland for a World Meeting of Families event attended by the church’s most committed anti-abortion activists. But they will find themselves, after Saturday’s historic repeal of an abortion ban in a landslide vote, in a country that is clearly part of Europe’s secular sprint out of the Roman Catholic fold.

Across Western Europe, the church’s once mighty footprint has faded, in no small measure because of self-inflicted clerical sex abuse scandals and an inability to keep up with and reach contemporary Catholics. Church attendance has plummeted, parishes are merging, and new priests and nuns are in short supply. Gay marriage is on the rise, and abortion is widely legal.

Francis is not sounding the alarm or calling the faithful to the ramparts. He seems resigned to accept that a devout and Catholic Europe has largely slipped into the church’s past. . . . . Instead, he has shifted his focus on the faith’s future to the global South . . . .  This turn has drawn criticism from conservative Catholics like those in the Continent’s most faithful country, Poland, who have allied with a nationalist government to keep out migrants.

The challenge for Francis is to keep the present decline of the church in Europe from becoming a preview of its future in South America and Africa. . . . . Inoculating the Southern Hemisphere from the growing scourge of sex abuse scandals, spreading secularism and out-of-touch clergy that devastated Catholicism in Europe is no easy task and will require much of the pope’s attention.

The church’s looming problems outside Europe’s borders don’t stop with sexual abuse. In Latin America and Africa, where the future of the church seems most promising, there are also signs it is losing ground in a bustling religious marketplace. In Brazil, which has the world’s largest Catholic population, evangelicals preaching prosperity gospels are giving stiff competition to Catholicism, which is projected to become a minority faith in 2030.

In wealthy Europe, though, the church’s woes show few signs of abating. . . . In Italy, many Catholic parishes are now operated by clergy born outside the country. In mostly Catholic Luxembourg, the government, led by a gay prime minister, abolished religious teaching in state schools in September. In 2012, the Archdiocese of Vienna consolidated its 660 parishes into 150.

Only one-in-five Catholics attend Mass in Spain now. In France, it’s one in 10. In the Netherlands, Mass attendance among Catholics is down to about 5 percent. In Germany, financial contributions to the church have thinned.

By most measures, Poland is the most faithful Catholic country in Europe. About 40 percent of Catholics attend Sunday Mass . . . . But there is also a more contemporary convergence between the traditional Christian values that John Paul promoted and the nationalism of President Andrzej Duda’s governing Law and Justice Party, which opposes Francis’ calls to accept migrants and to combat global climate change.

If the landslide vote in Ireland bothered Francis, he didn’t show it on Sunday afternoon. He smiled broadly as he blessed tens of thousands of people in St. Peter’s Square and urged them to pray for Africa.  Kilvia Passos, 47, cheered the pope as she held a flag of her native Brazil, the country with the world’s largest Catholic population. She said despite the growing competition of evangelicals there, the country still felt deeply Catholic. But so, until a few decades ago, did Ireland and the rest of Europe.

As a former Catholic very familiar with the Church's 11th century dogma on sexuality and the family, I do not believe the future will be kind to Catholicism which increasingly requires and ignorant, uneducated population to thrive.  Relying on lunatic "experts" will not stop the ongoing collapse in Europe and, I suspect soon, America.
Posted by Michael-in-Norfolk at Monday, May 28, 2018