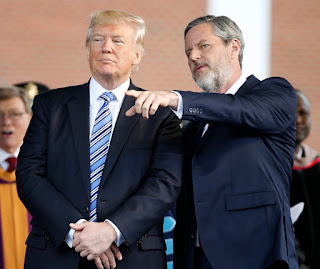 Other than Donald Trump, one of the most hideous and malignant forces in American politics is the Christofascist theocratic movement and the parasitic "professional Christians" who preach a message of hate while lining their own pockets and living lavishly.  Few represent this cancer on American society more than Franklin Graham, a steadfast supporter of Trump all too willing to overlook Trump's moral bankruptcy if  it aids his insatiable thirst for power (and, of course, more money in his own pocket in the process -  in 2014, Graham pocketed $622,252.00 from his "charity", Samaritan's Purse, alone).  Now Graham with his right wing extremist allies are focused on stirring up evangelical haters in California to rescue threatened Republican Congressional seats.  Among the bogeymen that Graham will peddle is the "threat" of same sex marriage and the myths of Christian persecution.  A piece in the New York Times looks at Graham's toxic mission.  Here are excerpts:

Franklin Graham stood in a packed locker room at the Rose Bowl, surrounded by fellow evangelists, pastors, and his top Los Angeles donors. It was two weeks before the California primary, and Mr. Graham was urging them to take a stand against their state’s “blue wall.”

The blue wall of California, Mr. Graham told the gathering, represents secular values that have taken root on the country’s west coast.

“Progressive?” he went on, “That’s just another word for godless.” Now is the time for churches to “suck it up” and vote.

Mr. Graham is leading a three-bus caravan up the middle of the state, one of the biggest political battlegrounds this year, to urge evangelicals to vote and to win California for Jesus. The two week tour ends on the day of the primary, June 5. . . . the parallel political message is just as resounding: Support candidates who will advance the socially conservative causes dear to many evangelicals — especially opposition to abortion and same-sex marriage — and get to the polls and vote for them. Three of his stops are in or bordering critical House districts in the Central Valley, and others hug the line between red and blue up the state.

Don’t be afraid to preach about it, Mr. Graham told the pastors. “Lose your tax exempt status; the progressives want to take it away anyway,” he said.

Though the state has one of the highest percentages of religiously unaffiliated adults, the fast growing religious group in the country, that largely blue sea is dotted with evangelical islands that are largely red. One in five adults in the state are evangelical Christians, according to the Pew Research Center, and there are more megachurches in California than in any other state.

And while 26 percent of national voters in 2016 were white born-again Christians, according to exit polls, just 13 percent of California voters were . . .

Finances play a role, too. After Mr. Graham’s home state of North Carolina, California is the second largest donor base for Samaritan’s Purse and his other organization, the Billy Graham Evangelistic Association.

Last Sunday, the day Mr. Graham began his bus trip, a large Los Angeles church on the border of an open House seat ended its services early and directed its 3,000 congregants to write letters protesting a state assembly bill that would prohibit conversion therapy, intended to change a person’s sexual orientation or gender identity, as a form of consumer fraud. In 2012, California passed a law restricting the practice on minors.

In 2016, Mr. Graham held rallies in all 50 state capitals to urge Christians to vote. Donald J. Trump won the White House that year, defying all predictions, in large part thanks to a groundswell of white evangelical turnout.

In California, one clear goal is to change the makeup of school boards. “Can you imagine if your school boards were controlled by evangelical Christians?” he asked the pastors in Pasadena, a not so subtle reference to conservative religious protests of California’s new sex education curriculum, which includes lessons on LGBTQ sexuality.

But other evangelicals are not comfortable with the political direction Mr. Graham is taking their faith. When a Graham organizer asked Daniel Balcombe, the pastor of Living Way Church near Escondido, to promote Mr. Graham’s rally, he said no. “He’s too politically toxic,” Mr. Balcombe, a registered Republican, said in an interview. “I told the organizer this, and he made excuses and insisted that he would not be political in his crusade. Still, I told him no thanks.”

It is a reminder that evangelicalism, and the culture that goes with it, is changing. Sergio De La Mora, pastor of a large Latino-led church with five main campuses, called Cornerstone Church of San Diego, says the future of California Christianity is neither red nor blue, especially because of the growing Hispanic church whose political priorities do not fit an expected mold.

While Mr. De La Mora voted for Mr. Trump, citing his family work ethic, he says he is most passionate about issues like green energy, women’s rights and immigration. “Don’t look at us as this lost, liberal state,” he said. “Look at us as this emerging new America that says, we can coexist.”

Graham's toxic agenda needs to be defeated and Christofascists need to be cast into the political wilderness as if they were radioactive.  They are all about hate and division despite disingenuous bleats about Jesus and "faith."
Posted by Michael-in-Norfolk at Monday, May 28, 2018