Sessions Is A Key Witness In Mueller Probe 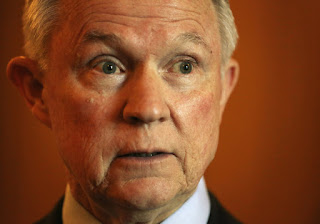 A piece in the New York Times sheds light on why Donald Trump, a/k/a Der Trumpenführer, has been so obsessed with either (i) getting Attorney General Jeff Sessions to reverse his recusal of himself from the Russiagate investigation, or (ii) firing Sessions so that he can appoint a new attorney general who will do Trump's bidding to torpedo and kill the Russiagate investigation. More importantly, the piece suggests that Jeff Sessions may be a principal witness for special prosecutor Robert Mueller.   What would Sessions testify about?  Although not stated in the piece, Mueller most likely wants to know about Trump's demands for loyalty and demands that the investigation of Trump and his co-conspirators killed.  All in all, it is part of the overall obstruction of justice agenda of Trump regardless of the efforts of Vichy Republicans and seeming Russian operatives like Devin Nunes to provide cover for Trump.  Here are article highlights:

By the time Attorney General Jeff Sessions arrived at President Trump’s Mar-a-Lago resort for dinner one Saturday evening in March 2017, he had been receiving the presidential silent treatment for two days. Mr. Sessions had flown to Florida because Mr. Trump was refusing to take his calls about a pressing decision on his travel ban.

When they met, Mr. Trump was ready to talk — but not about the travel ban. His grievance was with Mr. Sessions: The president objected to his decision to recuse himself from the Russia investigation. Mr. Trump, who had told aides that he needed a loyalist overseeing the inquiry, berated Mr. Sessions and told him he should reverse his decision, an unusual and potentially inappropriate request.

The confrontation, which has not been previously reported, is being investigated by the special counsel, Robert S. Mueller III, as are the president’s public and private attacks on Mr. Sessions and efforts to get him to resign. Mr. Trump dwelled on the recusal for months, according to confidants and current and former administration officials who described his behavior toward the attorney general.

The special counsel’s interest demonstrates Mr. Sessions’s overlooked role as a key witness in the investigation into whether Mr. Trump tried to obstruct the inquiry itself. It also suggests that the obstruction investigation is broader than it is widely understood to be — encompassing not only the president’s interactions with and firing of the former F.B.I. director, James B. Comey, but also his relationship with Mr. Sessions.

Investigators have pressed current and former White House officials about Mr. Trump’s treatment of Mr. Sessions and whether they believe [Trump] the president was trying to impede the Russia investigation by pressuring him. The attorney general was also interviewed at length by Mr. Mueller’s investigators in January. And of the four dozen or so questions Mr. Mueller wants to ask Mr. Trump, eight relate to Mr. Sessions. Among them: What efforts did you make to try to get him to reverse his recusal?To [Trump] the president, no decision has proved more devastating during his time in office than Mr. Sessions’s recusal. In Mr. Trump’s view, Mr. Sessions, who had been one of his closest political allies and earliest prominent supporter in Washington, never would have appointed a special counsel, as the deputy attorney general, Rod J. Rosenstein, did last May after the president abruptly fired Mr. Comey.Trump complains to friends about how much he would like to get rid of Mr. Sessions but has demurred under pressure from Senate Republicans who have indicated they would not confirm a new attorney general.Pressure on Mr. Sessions to step aside from the Russia investigation began building almost as soon as he took office, culminating in a Washington Post report on March 1 that he had not been forthcoming during his Senate confirmation hearing about his contacts with Russian officials during the campaign. Career lawyers at the Justice Department had advised Mr. Sessions to step aside, citing ethics guidelines about impartiality and his role as a prominent supporter of the Trump campaign.To Justice Department officials close to Mr. Sessions, the request by the president made through Mr. McGahn was inappropriate, particularly because it was clear to them that Mr. Sessions had to step aside. After Mr. Sessions told Mr. McGahn that he would follow the Justice Department lawyers’ advice to recuse himself from all matters related to the election, Mr. McGahn backed down. Mr. Sessions recused himself on March 2.When Mr. Trump learned of the recusal, he asked advisers whether the decision could be reversed, according to people briefed on the matter. Told no, Mr. Trump argued that Eric H. Holder Jr., President Barack Obama’s first attorney general, would never have recused himself from a case that threatened to tarnish Mr. Obama. [Trump] The president said he expected the same loyalty from Mr. Sessions.[E]xperts said they could think of no instance in which a prosecutor stepped aside from a case in circumstances similar to Mr. Sessions’s. Justice Department guidelines on recusal are in place to prevent the sort of political meddling the president tried to engage in, they said.Unnerved and convinced the president wanted to install a new attorney general who could oversee the Russia investigation, Mr. Priebus called Mr. Sessions’s chief of staff at the time, Jody Hunt, who said that [Trump] the president would have to ask Mr. Sessions himself to resign. Unsure how to proceed, Mr. Priebus simply waited out the president, who never called Mr. Sessions but did attack him that week on Twitter.Days later, Mr. Priebus was out as chief of staff. The special counsel has told [Trump's] the president’s lawyers that he wants to ask Mr. Trump about those discussions with Mr. Priebus and why he publicly criticized Mr. Sessions.

Mr. Trump brought up the recusal again with associates later last year, expressing a desire for Mr. Sessions to reassert control over an investigation that has since resulted in the indictment of his former campaign chairman and guilty pleas by two other campaign aides and his former national security adviser.

I have little regard for Sessions, but I hape Sessions worries more about how history will view him and does the right thing even if that means throwing Trump fully under the bus.
Posted by Michael-in-Norfolk at Wednesday, May 30, 2018