The Failure of Christian Political Leadership 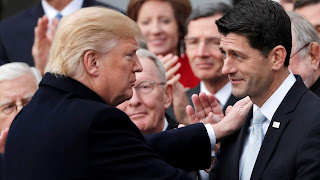 I will concede that there have been quite a few posts on religion and failures of religious leadership to even remotely reflect the gospel message of Christ.  As I have noted often, in the aggregate, I have come to view religion as among of the most toxic forces in society.  And then there is the hypocrisy, largely demonstrated by "religious conservatives" who seem most motivated by hatred of others and a desire to divide society into "us" versus "them" - those labeled as "other."  Be it Franklin Graham preach hate (and enriching himself) under the guise of serving "Jesus," the Catholic hierarchy turning a blind eye to - if not outright abetting - the sexual abuse of minors, or Paul Ryan pretending to care about the poor and unfortunate even as he seeks to gut the social safety net, far too many religious leaders either support the reprehensible or look the other way.  In yet another column in the Washington Post, Michael Gerson blasts the failure - I would call it moral bankruptcy - of leaders of Christian denominations, some of whom have thoroughly prostituted themselves to the amoral occupant of the White House.  Here are excerpts:

Three recent news items:
● At the Catholic Prayer Breakfast in Washington, House Speaker Paul D. Ryan said: “We see moral relativism becoming more and more pervasive in our culture. Identity politics and tribalism have grown on top of this.” Ryan went on to talk about Catholic social doctrine, with its emphasis on “solidarity” with the poor and weak, as “a perfect antidote to what ails our culture.”

● In the Oval Office, according to new reporting from The Post, President Trump boasted in February 2017 about how easy it is to appeal to audiences with an anti-immigrant message: “Acting as if he were at a rally, he recited a few made-up Hispanic names and described potential crimes they could have committed, such as rape and murder. Then, he said, the crowds would roar when the criminals were thrown out of the country.” In The Post’s account, “[Stephen] Miller and [Jared] Kushner laughed.”

● At the U.S. border, the brutal separation of confused, weeping children from parents who cross illegally is being implemented. Unaccompanied minors, too, are suffering. According to the Arizona Republic, “The Office of Refugee Resettlement reported at the end of 2017 that of the 7,000-plus children placed with sponsored individuals, the agency did not know where 1,475 of them were.” Some could be lost to abuse or trafficking.

What do these incidents add up to? A political, moral and religious failure of massive, discrediting proportions.

It is often difficult to apply theological doctrines to public policy. But if there is one area where the teaching of the Christian faith is utterly clear, it is in the requirement to care for the vulnerable stranger. According to the Hebrew scriptures: “When a foreigner resides among you in your land, do not mistreat them. The foreigner residing among you must be treated as your native-born.” In the New Testament, Jesus employs compassion for an abused, reviled foreigner (a Samaritan) as the test and definition of neighborly love.

The dehumanization of migrants and refugees has been one of the most consistent themes of [Trump] this president — including using the fact that some criminals enter the country illegally to fan a generalized hostility to Hispanic immigration. Can you imagine what would have happened if a White House staffer attending a policy meeting on family separation had said, “This is cruel. This is immoral. This is wrong”? They would have been quickly cleaning out their desk. The rejection of Christian teaching on this issue is pretty much a job requirement in the Trump administration.

And how did Ryan address the issue of Trump’s habit of dehumanization at the Catholic Prayer Breakfast? By avoidance, under a thick layer of hypocrisy. . . . . Ryan was effectively criticizing the whole theory of his speakership. . . . . Ryan can no longer speak of “moral relativism” as the defining threat of our time. . . .  In the name of survival, Ryan has ignored and enabled the transformation of the GOP into an anti-immigrant party.

My tradition of evangelical Protestantism is, if anything, even worse. According to a recent Pew Research Center poll, white evangelical Protestants are the least likely group in America to affirm an American responsibility to accept refugees. Evangelicals insist on the centrality and inerrancy of scripture and condemn society for refusing to follow biblical norms — and yet, when it comes to verse after verse requiring care for the stranger, they don’t merely ignore this mandate; they oppose it.

This represents the failure of Christian political leadership — not only from the speaker but from most other elected religious conservatives, too. . . . it indicates the failure of the Christian church in the moral formation of its members, who remain largely untutored in the most important teachings of their own faith.

Ryan concluded his remarks by quoting Mother Teresa on God’s call to “be faithful,” not to “be successful.” But what if one is neither? Perhaps silence is the best option.