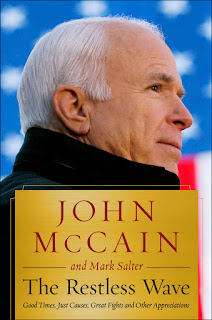 While I have often disagreed with his positions, I have always had respect for the man and still wish that he, rather than George W. Bush, had been the 2000 Republican presidential nominee. So much tragedy and needless deaths might have been avoided in Iraq and elsewhere.  And compared to the current occupant of the White House - who I never give the title of "president" - McCain has always tried to maintain a level of moral decency and "American values" if you will.  Now, leaving Congress and with likely not much time left on this side of life, McCain's new book, Restless Wave, seems written with a view of how McCain will be viewed by history and he confronts not only some of his own biggest mistakes but also the moral cesspool the Republican Party has become as best symbolized by Der  Trumpenführer.  A review of the book in the Washington Post gives a brief summary of points in the book.  Here are highlights:

Unlike the previous six books McCain and Salter have composed together, this one wasn’t written for voters. It was written for history. In an era of all-caps tweets and angry denunciations of supposed “witch hunts,” the Arizona Republican’s final book, published Tuesday, casts him as a profile in courage. McCain highlights his advocacy for the Iraq troop “surge” when it was toxically unpopular in 2007 and his decisive vote against repealing Obamacare in 2017. He finally tells his side of his 2008 Sarah Palin partnership. With what time he has left, the “maverick” — an appellation he has worn throughout his career, at some times more comfortably than at others — is going to put country first and tell the truth.

He expresses regret that he did not pick Joe Lieberman to be his running mate 10 years ago. His best friend, Sen. Lindsey Graham (R-S.C.), “enthusiastically endorsed the idea” of bringing their colleague, who had been the 2000 Democratic vice-presidential nominee, onto “a national unity ticket.” But everyone else in McCain’s circle told him it would fatally divide the GOP.

McCain attributes the insufficient vetting of Palin, 44 and two years into her first term as Alaska’s governor, to his sulking about not being able to tap Lieberman. Taking the blame for her stumbles, he writes, “She was a skilled amateur performer asked to appear on Broadway twice a day.” I wish he had grappled more fully with the mayhem Palin’s selection created inside the GOP. It laid the groundwork for the ascent of Donald Trump a few years later.

Trump emerges as a bete noire in the book. When McCain after the 2016 elections received a copy of the “dossier,” detailing unverified allegations about the president compiled by an opposition researcher, he immediately turned it over to James Comey so the FBI could explore whether Trump was compromised by the Russians. “Anyone who doesn’t like it can go to hell,” writes McCain.

But he also portrays [Trump] the president as an outgrowth of tectonic shifts in a party for which, just 10 years ago, he was the standard-bearer. Now he sometimes struggles to recognize it. “Trump seems to vary from refusing to believe what [Russian President Vladimir] Putin is doing to just not caring about it,” he frets. “And some House Republicans investigating Russian interference seem more preoccupied with their own conspiracy theories than with a real conspiracy by a foreign enemy to defraud the United States.”

McCain repeatedly criticizes conservative “talk radio blowhards.” He calls the House Freedom Caucus “the say-no-to-everything crowd.” He says nativists “need to be confronted, not ignored or winked at or quietly dismissed as kooks.” He mocks his 2016 primary challenger, Kelli Ward, for attacking him as “a champion of compromise.” “You’re damn right,” he responds. Former Trump aides Steve Bannon and Sebastian Gorka are “self-proclaimed nationalist radicals.” “Bigger misfits haven’t been seen inside a White House since William Taft got stuck in his bathtub,” he writes.

All politicians self-mythologize. This book is an effort to codify McCain’s maverick brand. He puts extra emphasis on his work across the aisle, including a 38-page chapter about working with Sen. Ted Kennedy, the liberal lion from Massachusetts, on health care and immigration. He has kind words for other leading Democrats, too, including Hillary Clinton.

McCain says he’s a proud Reagan Republican. “Not a Tea Party Republican,” he writes. “Not a Breitbart Republican. Not a talk radio or Fox News Republican. Not an isolationist, protectionist, immigrant-bashing, scapegoating, get-nothing-useful-done Republican. Not, as I am often dismissed by self-declared ‘real’ conservatives, a RINO, Republican in Name Only.”

McCain’s maverick-iness has ebbed and flowed. He’s mostly been a reliable party-line vote since getting elected to Congress in 1982, but he’s broken with Republicans on a few key issues. He earned the enmity of appropriators in both parties by battling earmarks before that was in vogue, and he clashed with his own party leaders by agitating for campaign finance reform.

He admits to some big mistakes: “The principal reason for invading Iraq, that Saddam [Hussein] had WMD, was wrong,” McCain writes. “The war, with its cost in lives and treasure and security, can’t be judged as anything other than a mistake, a very serious one, and I have to accept my share of the blame for it.”

But the senator’s critique of [Trump] the current president is more sustained than any other. “For all our disagreements I never doubted President Obama shared the seventy-five-year bipartisan consensus that American leadership of the free world was a moral obligation and a practical necessity,” he writes. “I’m not sure what to make of President Trump’s convictions.” . . . . “He seems uninterested in the moral character of world leaders and their regimes,” McCain writes. “The appearance of toughness or a reality show facsimile of toughness seems to matter more than any of our values. Flattery secures his friendship, criticism his enmity.”

McCain does not want to be defined by opposition to Trump, . . . . He would, however, like to be remembered for his long crusade against torture. He devotes a meaty chapter to the topic and recounts apologizing personally to someone who suffered at the hands of his American captors while in Libya, over the objection of the CIA station chief.

McCain wants to hold that moral high ground, and he’s peeved by any suggestion that he’s not worthy of claiming it. The senator tried to run an honorable campaign in 2008. He forbade his staff from mentioning Jeremiah Wright, Obama’s controversial former pastor. In many ways, this gesture seems much more impressive now — after Trump spent years insisting that Obama was born in Kenya and demanding to see his birth certificate.

“I worry that we are at a turning point, a hinge of history, and the decisions made in the last 10 years and the decisions made tomorrow might be closing the door to the era of the American-led world order,” McCain writes. “I hope not, and it certainly isn’t too late to reverse that direction. But my time in that fight has concluded.”


McCain is one of the few remnants of the GOP I was proud to be a part of.  Sadly, those days appear to be gone forever as the GOP sinks deeper and deeper into a complete moral cesspool.  From my own experience in the GOP, it is no surprise that the Christofascist have lead the way towards the GOP's moral bankruptcy.
Posted by Michael-in-Norfolk at Monday, May 28, 2018