The Right Cannot Stop the Future 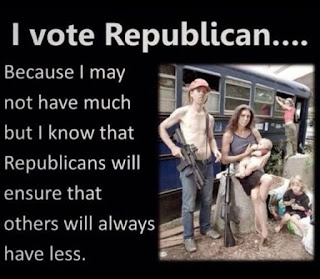 If one looks at the agenda of the Republican Party and its current base of white supremacists, Christian extremists, and other misogynists it ultimately resolves down to an effort to oppose modernity and social and demographic change.  Basically, it's a fight against the future. Hence the denial of evolution, the denial of climate change, desperate efforts to maintain the white privilege of the 1950's, and denial about modern knowledge about sexual orientation and gender identity.  The list of what is rejected and/or denied is lengthy.  Under this mindset, anything that challenges archaic and bigoted beliefs - especially those that challenge the false claim that the Bible id inerrant - must be resisted.  The problem is that even if short term rear guard battles are won, in the age of the Internet and easy access to accurate information, the long term war will be lost.  A day of reckoning will come despite the most hate-filled and discriminatory efforts and the embrace of ignorance by the core of the GOP base and evangelical Christians.  A long piece in The Daily Beast looks at this ultimate exercise in futility that is no different than when the Catholic Church attacked those who said the earth wasn't flat and wasn't the center of the universe.  Here are highlights:

It seems axiomatic that the past and the future cannot exist at the same time. Thanks to the space-time continuum, people from different centuries cannot live simultaneously. The same goes for a nation, which cannot survive pulling toward the future and toward the past at once.

The United States is at a fulcrum. We are two countries—one lurching for the future, one yearning for the past—that cannot live together, because we can’t be both things. Donald Trump may have brought on the breaking point, but he didn’t create the schism. It was already there for him to exploit.

Today, Trump is speeding us toward decline—the very decline his supporters so feared. His imperious leadership; his family’s grubby pretense at royalty and the apparent mad dash among members of his cabinet and White House team to hawk their positions for cash and luxuries have the feel of a decrepit regime looting the palace in its final days; stuffing the silver in their coats as they flee into exile.

Trump’s announcement of anachronistic trade tariffs this week was portrayed as out of the blue, but it was no such thing. Trump ran on ending multilateral trade agreements and recreating an America of the distant past that culls every human and material resource from within. Republicans who are now in full blown freakout over a potential trade war voted for exactly what they’re getting.

In every way, Donald Trump is a president built for the past; a benighted, late 19th Century figure who spun his supporters a tale that he could restore a bygone era when coal fires burned, factories hummed, steel mills belched out soot and opportunity and a (white) man with a sturdy back, a high school diploma and a song in his heart could buy a little house, marry a little wife and have 3 cherry-cheeked kids he didn’t ever have to cook or clean for, plus if he can afford it, a hot mistress on the side. Trump is the slovenly but brash, gold-plated emblem of a time when in the imagination of his followers, black women hummed a tune while they cleaned your house or did the washing, black men tipped their hat on the street but didn’t dare look you in the eye, and neither would dream of moving in next door. A time when women asked their husbands for an allowance, not their boss for a promotion, men were “allowed to be men” complete with ribald jokes and a slap on the fanny for the pretty secretary at work, and there were no gays, no trans people, no birth control …
Going backward, to a world without ambiguity on race, gender and work is a powerfully attractive idea, particularly for those who fear losing their cultural and social hegemony as the nation browns, and their economic ascendancy as technology creates new industries they scarcely understand.


But here’s the thing: the past really is past. Coal is still a dying industry and America will never again have an industrial revolution. It’s other countries’ turn to do that now. Black and brown people aren’t giving up our dignity, including the right to protest and to survive mundane encounters with police. Immigrants aren’t going away (and in fact we need them to keep the economy and the safety net flush). LGBT people aren’t going back into the closet.

There is indeed a sizable minority of Americans who want to go back to the old times. But we aren’t going back.  Neither is the world.
While we regress, the rest of the planet will go right on trading without us. Tariffs on other countries will invite tariffs on us (Europe is already considering levying them on everything from Levi’s to Kentucky bourbon to Harley Davidson motorcycles). And protectionism will protect zero American jobs, while hiking the prices of everything we buy that’s made with aluminum and steel, from cars to washing machines to pots and pans.
[Trump] only cares about the show. And he always gives his people a good show. But the economy does care. And America will pay a price for their P.T. Barnum president and his temper tantrums.

Meanwhile, there is another America, which is busy concerning itself with the future. It’s the America that produces two-thirds of this country’s economic output, though it represents just hundreds of counties versus Trump’s thousands. It’s the America that objects to Russian interference in our elections, that welcomes immigrants and their economic contributions, that recognizes that even ancient institutions like marriage can modernize, that views women’s full equality as a boon not a threat to civilization, that doesn’t want to be ruled from Biblical texts or by a savage gun lobby, and that wants America to be a part of the world, not it’s creaky, cranky, lonely adversary.

In particular, young Americans—Millennials and post-Millennials, have had enough of our tired wrangling. They’re sick of the Baby Boomers’ social agonies and the clenched grip of the World War II generation on American social and political life. They want an end to throwback rigidity on guns, gays, and religion. And they neither respect nor revere the current president of the United States.

Far from becoming more conservative with time, young Americans are staying right where they were when Barack Obama was first elected—on the left of center—if not growing more progressive. It’s why Republicans are so keen to suppress their votes. . . . They are the most racially diverse generation in modern American history. And by next year, Millennials will be the single largest generational group in America, with their ranks swelled by immigrants (which explains the urgent right wing push for mass deportation.)
Does anyone really believe they will somehow morph en-masse into NRA-obedient, Fox News-zombie, anti-gay, anti-woman, anti-immigrant, maniacal healthcare destroyers who’ll vote for serial sexual predators?
With its broad and seemingly absolute power over the country, the Republican Party may not feel like it is dying, but it is dying nonetheless, at the hands of youth and multiracial population growth. The GOP can rush to install voter suppression traps and other restraints on change to try and keep the tide from coming in. But it will come anyway.
Perhaps the biggest challenge future-facing America faces is that past-craving America has a dogmatic and consistent voting base and a determined and persistent ally: Russia, which alongside its embedded mercenaries from the so-called “alt right” are harnessing maturing modern tools like social media to keep the futurists at bay. But we won’t have a president who cuddles up to Russia and neo-fascists forever. Eventually, the fight against them and their propaganda will be joined in earnest and won.

The future is coming. It cannot live alongside the past. And in the end, it cannot be stopped.

The Republican Party of today and Trump has no long term plan for the future.  Indeed, it is guaranteeing that sooner or later it will be obliterated at the polls.  The more it tries to stop the future, the more hash the reckoning will be.  It cannot happen soon enough to suit me.  Millennials need to understand that they can kill the GOP.  All they need to do is register and vote against Republicans in every election cycle at every level.  The monster that the GOP and its base has become can be killed.  Let's kill it.