A Great Memory: What it Was Like to Fly the Concorde 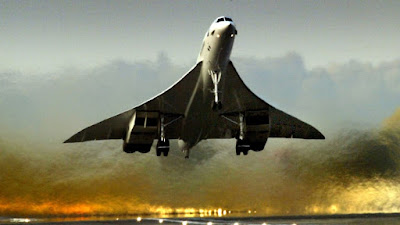 Believe it or not, I do read things that don't relate to politics or LGBT rights and activism.  And I came across a piece in CNN yesterday that was fun for me because it looked at something that I actually did back in my days as in-house counsel for an oil company: I flew the Concorde.  It was in August, 1981, after a 10 day negotiating trip to Morocco.   I was already in Morocco with three other company representatives when the air traffic controller strike hit and air travel became a chaotic nightmare to and from and within the USA.  We generally flew first class on overseas trips at company, but the Concorde was off limits under normal circumstances.  Under the circumstances, the Concorde offered the assured way to be sure we got back to America.  The Moroccan government made the reservations for our party and few flew from Casablanca to Paris, spent the night at the always fabulous Plaza Athenee - perhaps my favorite hotel in the world - and then took Concord to New York City, leaving Paris at 12:00 noon and arriving in New York around 8:30 am.  We maintained Mach 2 all the way across the Atlantic Ocean.  As the CNN piece notes, it truly was something special (I still my boarding pass holder and the menu - each flight had a unique menu).  Here are some article highlights (check out the 28 photos in the article):

In 1976 -- over 40 years ago -- elite passengers were crossing the Atlantic in under three and a half hours, flying at twice the speed of sound in the Anglo-French Concorde.

Only 20 of the sleek, delta-winged SSTs were built, and just 14 were delivered to two airlines -- seven each to Air France and British Airways.

With superlative service and cuisine, exclusive airport lounges and stratospherically high airfares, Concorde passengers flew far above other flights, and cruised faster than fighter jets to their destinations.

But what was it really like to rub shoulders with the rich and famous on a Concorde flight? CNN Travel asked some former passengers.

"The flight attendants loved being on it; the passengers loved being on it," says CNN's Richard Quest, who flew Concorde five times. "You were aware of being part of a very small group of people that were privileged enough to be on Concorde.

With an interior fuselage width of about eight and a half feet (2.63 meters), Concorde's cabin was just wider than that of today's Bombardier Regional Jet. The SST had a single aisle, with a two-two seating configuration.

"The quality and style of food service was exceptional, . . . . "I felt more strongly that I had entered a private club. It was a brief glimpse into a life I had not known, polite, considerate, and beautifully detailed. It was impossible to not feel spoiled, and valued," says Ford.

Concorde was the first -- and still only -- passenger aircraft that had turbojet engines with afterburners. Called "reheat" by the British, raw fuel was introduced into the exhaust of the plane's four engines, immediately increasing the engines' thrust by almost 20%.

"Each takeoff was a phenomenal experience, the performance such that we had to warn the passengers in advance what to expect. The roar of the Rolls-Royce Olympus engines, combined with being pushed back into your seat, was like no other civilian aeroplane."

Reheat was also used to push the plane from subsonic to supersonic speeds.

While Concorde no longer takes to the skies, it can be visited at a number of aviation museums around the world.

It truly was an experience that I will never forget.  I can still close my eyes and recall the takeoff and the steep pitch of the plane as it gained altitude with the afterburners fully engaged.