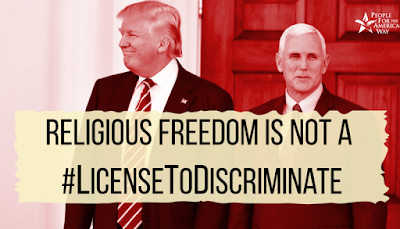 In an apparent desperate attempt to motivate their base now that (i) Der Trumpenführer likely trade war may wipe out whatever meager take home pay increases the working class elements of GOP  base might have experienced from the GOP/Trump tax cuts - a column in the Washington Post looks at this topic and others here - and (ii) the Stormy Daniels story seemingly gaining steam, 22 GOP U.S. Senators have re-introduced the falsely named "The First Amendment Defense Act" ("FADA") which would bar the federal government from taking any action against Christian extremists (and arguably other homophobes) who engage in discriminate against same-sex couples or others based on "a sincerely held religious belief."  With polls showing congressional Republicans down by double digits compared to a generic Democrat and Trump's polling still in the toilet, Republicans see pandering to still loyal evangelical Christians critical in the lead up to the 2018 midterm elections. The Hill looks at this disgusting effort at self-prostitution.  Here are excerpts:

A group of 22 GOP senators is reintroducing a controversial measure that would protect opponents of same-sex marriage from federal actions intended to curb discrimination.

The First Amendment Defense Act (FADA) would bar the federal government from taking any action against individuals who discriminate against same-sex couples or others based on "a sincerely held religious belief."

The bill would also protect those who discriminate against marriages not recognized under federal law or individuals who engage in sex outside of marriage.

FADA was introduced in both the House and the Senate in 2015, but only received a hearing in the House.  The bill never advanced to a full vote, however, amid protests from Democrats and concerns among Republicans that then-President Obama would veto the measure if it reached his desk.

Supporters of the bill say that it is necessary to protect First Amendment guarantees, while opponents argue that it ultimately amounts to an attempt to legalize anti-LGBT discrimination.

As a presidential candidate, Trump indicated that he would sign the measure if it were sent to his desk, saying that it would "protect the deeply held religious beliefs of Catholics and the beliefs of Americans of all faiths."

Note that Ted Cruz - a man with a long history of homophobia and self-prostitution to Christofascists  - is one of the bill's sponsors.  This bill would allow Christofascists - and arguably homophobic Muslims - to ignore non-discrimination laws while demanding protections for themselves under they very laws they seek to ignore.  As stated often, NO ONE is more selfish and self-centered - and more hypocrisy filled - than the "godly folk."
Posted by Michael-in-Norfolk at Friday, March 09, 2018