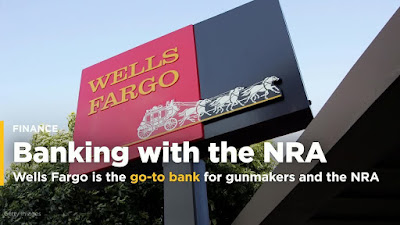 While numerous national corporations have ended relationships with the NRA - a front organization for gun manufacturers - there has been far less publicity of those who are in the pockets of the NRA's puppet masters. As case in point, according to a piece in Bloomberg, is Wells Fargo, the financier of choice of many gun manufactures which hide behind the visage of the NRA. The Bloomberg piece also identifies other leading lenders who have, by default in the eyes of many,  blood on their hands.  Some of these lenders include Morgan Stanley, Bank of America, JP Morgan, US Bancorp, BB&T, and PNC Bank.    If readers who do business with these banks find these relationships distasteful at best, call them and voice your displeasure.  Better yet, close you accounts and move them elsewhere and let the offending bank know why they have lost your business.  Here are highlights from the Bloomberg piece:

Wells Fargo & Co. has emerged as the preferred financier for the U.S. gun industry.

The bank has helped two of the biggest U.S. firearm and ammunition companies access $431.1 million in loans and bonds since December 2012, when the gun control debate gained steam after the school shooting in Newtown, Connecticut, according to data compiled by Bloomberg. That puts it on the top of the list of banks arranging funding for gunmakers.

Wells Fargo also has a long relationship with the National Rifle Association, inherited from banks that Wells took over. The San Francisco-based Wells Fargo created a $28 million line of credit for the NRA and operates the primary accounts for the pro-Second Amendment group, financial documents show.

Following the Feb. 14 shooting at a Parkland, Florida, high-school that left 17 dead, retailers such as Dick’s Sporting Goods Inc. have implemented stricter gun rules, such as increasing the age necessary to buy one, and some companies, like Delta Air Lines Inc., have cut ties with the NRA’s member-benefits program. Those changes were largely driven by boycott movements on social media. Banks, which have made millions financing the NRA and firearms manufacturers, haven’t been a focus in the same way.

Other banks are active as bookrunners for gunmakers, sometimes jointly. Morgan Stanley helped arrange $350 million in debt and TD Securities $332.5 million, according to data compiled by Bloomberg. Bank of America Corp. and JPMorgan Chase & Co. and two other banks each arranged $273.6 million. That’s counting loans and bonds to gun and ammunition manufacturers American Outdoor Brands Corp. and Vista Outdoor Inc. since the day of the Sandy Hook bloodshed. Another gunmaker, Sturm Ruger & Co., currently has no public debt. Remington Outdoor Inc. has debt outstanding, but it was issued before December 2012.The NRA paid $9.9 million in banking fees in 2015 and 2016, according to annual reports filed with the Internal Revenue Service. The NRA didn’t respond to requests for comment.The [Wells Fargo] bank’s involvement with the NRA stemmed from its 2008 purchase of Wachovia Corp. Wachovia’s relationship with the NRA, in turn, came from its takeover of First Union National Bank.

The NRA and Wells Fargo amended its longstanding financial arrangement in 2014, according to public records, when the lobbying group agreed to borrow $22.6 million in exchange for pledging its Fairfax, Virginia, headquarters as collateral. The building was assessed at $40.4 million last year, according to Fairfax County records, down from $57.9 million a decade ago.