Did Trump Try to Tamper With Witnesses? 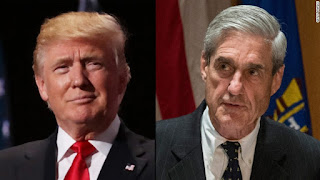 For years Donald Trump rain his real estate operations in a manner akin to a narcissistic mob boss, with a clear mindset that he could do whatever he wanted, be it dealing with shady underworld figures or ignoring the advice of his above board legal counsel.  This latter inclination continues unabated as Trump seemingly ignores the advice of his legal counsel in the Russiagate investigation.  A huge no no in any criminal investigation is witness tampering and any good legal counsel will tell a potential target of the investigation to either completely stay away from witnesses or  avoid any conversations whatsoever about their testimony to investigators.  To do otherwise creates the appearance that efforts may be underway to alter what witnesses will testify - a potential crime in itself and an indicator that obstruction of justice is occurring.  As the New York Times is reporting, Trump has ignored these basic rules (no surprise here) and may be worsening his own situation.  Adding to the negative potential is the exposure of lies Erik Prince - a well know shady individual to Hampton Roads residents - has lied about his efforts to set up a "back channel" to the Kremlin for Trump/Pence regime.  Here are highlights from the Times piece:


The special counsel in the Russia investigation has learned of two conversations in recent months in which President Trump asked key witnesses about matters they discussed with investigators, according to three people familiar with the encounters.

In the other episode, Mr. Trump asked his former chief of staff, Reince Priebus, how his interview had gone with the special counsel’s investigators and whether they had been “nice,” according to two people familiar with the discussion.

The episodes demonstrate that even as the special counsel investigation appears to be intensifying, the president [Trump] has ignored his lawyers’ advice to avoid doing anything publicly or privately that could create the appearance of interfering with it.

The White House did not respond to several requests for comment. Mr. Priebus and Mr. McGahn declined to comment through their lawyer, William A. Burck.

Legal experts said Mr. Trump’s contact with the men most likely did not rise to the level of witness tampering. But witnesses and lawyers who learned about the conversations viewed them as potentially a problem and shared them with Mr. Mueller.

In investigating Russian election interference, Mr. Mueller is also examining whether [Trump] the president tried to obstruct the inquiry. . . . The experts said the meetings with Mr. McGahn and Mr. Priebus would probably sharpen Mr. Mueller’s focus on [Trump's] the president’s interactions with other witnesses. The special counsel has questioned witnesses recently about their interactions with [Trump's] the president since the investigation began. The experts also said the episodes could serve as evidence for Mr. Mueller in an obstruction case.

“It makes it look like you’re cooking a story, and prosecutors are always looking out for it,” said Julie R. O’Sullivan, a law professor at Georgetown University and expert on white-collar criminal investigations. . . . “It can get at the issue of consciousness of guilt in an obstruction case because if you didn’t do anything wrong, why are you doing that?”

Central figures in investigations are almost always advised by their own lawyers to keep from speaking with witnesses and prosecutors to prevent accusations of witness tampering.

Mr. Trump’s interactions with Mr. McGahn unfolded in the days after the Jan. 25 Times article, which said that Mr. McGahn threatened to quit last June after the president asked him to fire the special counsel. After the article was published, the White House staff secretary, Rob Porter, told Mr. McGahn that [Trump] the president wanted him to release a statement saying that the story was not true, the people said.

Mr. Porter, who resigned last month amid a domestic abuse scandal, told Mr. McGahn the president had suggested he might “get rid of” Mr. McGahn if he chose not to challenge the article, the people briefed on the conversation said.

Mr. McGahn did not publicly deny the article, and [Trump] the president later confronted him in the Oval Office in front of the White House chief of staff, John F. Kelly, according to the people.

[Trump] The president said he had never ordered Mr. McGahn to fire the special counsel. Mr. McGahn replied that [Trump] the president was wrong and that he had in fact asked Mr. McGahn in June to call the deputy attorney general, Rod J. Rosenstein, to tell him that the special counsel had a series of conflicts that disqualified him for overseeing the investigation and that he had to be dismissed.

It is not clear how the confrontation was resolved. Mr. McGahn has stayed on as White House counsel, one of the few senior administration officials who has been with the president since the campaign.

Mr. Priebus met with [Trump] the president in the West Wing in December, according to the people with knowledge of their encounter. . . . . Mr. Trump brought up Mr. Priebus’s October interview with the special counsel’s office, the people said, and Mr. Priebus replied that the investigators were courteous and professional. He shared no specifics and did not say what he had told investigators, and the conversation moved on after a few minutes, those briefed on it said. Mr. Kelly was present for that conversation as well, and it was not clear whether he tried to stop the discussion.

Given the daily flow of lies that flow from Trump's mouth, I candidly do not believe anything he says, especially when it comes to collusion and coordination with Putin/Russia.
Posted by Michael-in-Norfolk at Thursday, March 08, 2018