Mass Shooters: Entitlement and Rage Nurtured by the Far Right 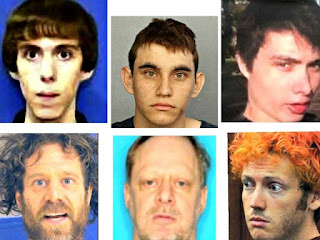 Not everything that is wrong in America today flows from the rise of the far right in the Republican party and right wing "news" outlets such as Fox News and Breitbarth deliberately fan the flames of hate and resentment on the part of the ugliest elements of the GOP base: white supremacists, Neo-Nazis, and Christian extremists/evangelical Christians.  All of these elements of the right wing base experience rage that they are not adequately respected, blame their societal isolation or lack of economic good fortune on others be it blacks, women, gays, immigrants, etc.  They are never the ones at blame regardless of their actions, be it dropping out of school, mistreatment of others or the embrace of ignorance.  Sadly, today's Republican Party is only too happy to play upon this rage and hatred factor and wittingly or not, nurtures those most threatening to society, including mass shooters who almost invariably are disaffected white males., many of whom are obsessed with guns. A piece in Salon looks at this connection between the white male mass shooters and today's political and social far right.  Here are excerpts:


Many mass shooters end up shot dead, either by their own hand or by the police. Unlike serial killers, they aren't generally available for post-crime interviews by psychologists or criminologists. But the Washington Post published a profile last week of Jesse Osborn, who survived his attempt to become a nationally famous school shooter on Feb. 14, 2016, when he was tackled by a voluntary fireman after Osborn's gun jammed during his attempted mass murder at an elementary school. He was 14 years old at the time. His rampage left two people injured and two others dead -- his father and a six-year-old boy. Osborn himself is alive and on trial for murder.

Osborn offers "extraordinary insight into the mind of an American school shooter." Those who have studied him report that Osborn shows little to no signs of remorse, and in fact seems proud of the will to dominate that led him to his crimes. He "considered himself the victim of an unfair world," Cox writes, and tried to manipulate psychologists by faking autism and schizophrenia, unsuccessfully, and claiming, again unsuccessfully, to be a victim of bullies.

But what struck me is how much Osborn — like many other mass shooters, including Nikolas Cruz, the shooter in Parkland, Florida — reminds me of the army of right-wing trolls that has grown online: The ones who call themselves "edgelords," who decorate their profiles with Pepe the Frog and who call Donald Trump their "god emperor." Like mass shooters, alt-right trolls are predominantly white men of various ages, but leaning young, fueled mainly by a belief in their own superiority and resentment that the rest of the world doesn't seem to respect it.

They are unapologetic in their sadism, relishing the pain and trauma they attempt to inflict on "libtards" and "snowflakes." Mass shooters get competitive about their body counts, and online trolls treat harassment like a game, where they "win" by maximizing the amount of abuse they dish out.

Mass shooters should be understood, it seems, as the radical edge of a larger trend of celebratory sadism spiked with right-wing politics -- a great boiling-over of rage from young and disaffected white men who believe they are victims and take great glee in trying to dominate, abuse and even assault others. This brings up extremely serious questions about the role the larger conservative movement is playing in allowing this toxicity to fester and grow.

In 2014, researchers published a paper demonstrating that online trolls showed high rates of what psychologists call the "Dark Tetrad" of personality traits, . . . "Machiavellianism (willingness to manipulate and deceive others), narcissism (egotism and self-obsession), psychopathy (the lack of remorse and empathy), and sadism (pleasure in the suffering of others)." [The piece correctly notes that the current occupant of the White House displays all of these traits.]

Mass shooters and the alt-right intertwine directly in many other ways as well. A recent Southern Poverty Law Center report counted 43 murders at the hands of alt-right-aligned killers in the past four years. . . . Perhaps even more tellingly, the alt-right has made a habit of swarming after any high-profile mass shooting, targeting the survivors for re-victimization. Often within minutes of the first news reports, right-wing trolls will begin spreading rumors online that the survivors and family members of victims are "crisis actors," and may even encourage their followers to harass these people.

That we have seen an apparent surge in sadism, rooted in white male entitlement, is troubling enough. What makes the situation worse is the way the larger conservative movement has, almost habitually, run interference for not just alt-right trolls but, to some extent, the mass shooters who represent the most extreme expression of the same problem.

Whenever alt-right conspiracy theorists and white supremacists face actual consequences for their behavior — social media bans, public protests or just higher security expenses at public events — more mainstream conservatives, including Fox News pundits, have been willing to defend them, usually by declaring their "free speech" is being attacked by "snowflake" liberals.

Similarly, whenever there's a mass shooting, the conservative press snaps into action, seeking to minimize the situation and dissuade any effort to stop future mass shooters by disarming them.

In both cases, conservative pundits play a manipulative game, where they swear up and down that while they disapprove of the actions in question — whether it's bigoted harassment or mass murder — their supposed commitment to principles like "free speech" or "right to bear arms" prevents them from supporting even mild, common-sense efforts to rein in the bad behavior in question.

It's high time to understand mass shootings as not an anomaly, but as part of a larger ecosystem of viciousness that is growing in our culture, and has been shielded and fed by a conservative movement more interested in retaining power than confronting these larger social problems. Until we make these connections, and take actions are taken to counter the epidemic of white male sadism and rage, we can expect these terrible events to keep on happening.

Posted by Michael-in-Norfolk at Wednesday, March 07, 2018