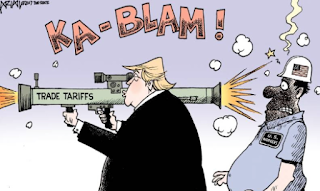 The delusional narcissist in the White House likes to "win" and "punch back" but many Republicans believe that his threatened tariffs and a possible trade war will leave them being the ones against whom the punches is landed.  Especially in the 2018 midterm elections.  Tariffs will likely raise cost for American manufacturers and consumers and, at least in the case of consumers, wipe out or exceed the meager benefits - if any - realized from the GOP/Trump tax cuts.  Most impacted may be some of the states where Republicans are most vulnerable.  Trump's base may be thrilled by their "dear leader" attacking foreign business interest but failed to see - as is almost always the case with GOP policies - that they will be the ones picking up the costs through lost jobs or rising prices.  A piece in Politico looks at Republican fears and the intra-party rancor Trump is fueling.  Here are excerpts:

Donald Trump’s threatened trade war has opened a rift within the Republican Party that some lawmakers and strategists believe could undermine their effort to keep their majorities in Congress.

Republicans plan to brag about the economy in midterm campaigns in hopes of countering Trump’s unpopularity, touting a strong stock market, low unemployment rate and — most importantly — their increasingly popular tax legislation. But Trump’s suggestion Saturday that he might slap penalties on European cars, in addition to the tariffs on aluminum and steel he already promised, could upend that strategy completely, Republicans say.

"American manufacturers, businesses and consumers would be forced to bear the brunt, paying more for steel and steel products,” said Senate Finance Chairman Orrin Hatch (R-Utah), . . . . “Such action could very well undercut the benefits of the pro-growth tax reform we fought to get on the books.”

“It’s a real simple frame for the [midterm] election: Republicans want to run on issues,” said Douglas Holtz-Eakin, president of the American Action Forum and a former Congressional Budget Office director. “This threatens that because it … goes against our economic message.”

While narrow action directed at China alone might be well received, two top Republican congressional campaign sources said any broader trade actions — such as what Trump is floating now — could be devastating.

The back and forth comes just days after Trump said he would slap a 25 percent tariff on imported steel and 10 percent on imported aluminum as soon as this week. Trump tweeted Friday that “trade wars are good” and “easy to win.” And by Saturday, Trump doubled down by threatening to retaliate against countries seeking to punish the U.S. for its protectionism.

Most of the party flat-out disagrees. Sen. Mike Lee (R-Utah) called Trump’s proposed tariffs a "huge job-killing tax hike.” Sen. Ben Sasse (R-Neb.) said it will “kill American jobs.” And even Trump allies Larry Kudlow, Arthur Laffer and Stephen Moore argued in a Saturday CNBC op-ed that “even if tariffs save every one of the 140,000 or so steel jobs in America, it puts at risk 5 million manufacturing and related jobs in industries that use steel.”

Republicans have seen “this movie before, and they know it ends poorly,” said Holtz-Eakin, who worked in the George W. Bush administration. “I was at the White House for steel tariffs, and in the end, there was a lot of retaliation against the U.S.”

[A] trade war, Republicans say, would complicate their central pitch to voters that the GOP is good for business and Democrats will tank the economy.

Already, the EU has suggested it could retaliate against orange growers in the swing state of Florida, motorcycle maker Harley-Davidson in Wisconsin and other industries that could hurt toss-up areas that Republicans need to win if they're going to keep the House and Senate.

Sen. Lindsey Graham (R-S.C.), appearing Sunday on CBS’ “Face the Nation,” listed several South Carolina industries that he said would suffer, including tire and car manufacturers. And he directed his message to Trump personally: “You’re letting China off the hook and punishing the American consumer and our allies. You're making a huge mistake here.”

Republicans know they’re powerless to stop Trump. While they’re relatively accustomed to a president whose views don’t always align with their own, they don’t usually panic because they can simply refuse to pass legislation to make most significant policy changes. On trade, however, Trump can do as he pleases — sans Congress.

“When it comes to trade, that’s an executive power. There’s very little we can do,” said a senior Republican aide who is alarmed at the Trump administration’s trade policy.