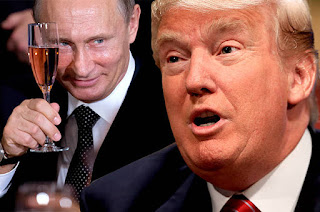 Yesterday I posted about the perils of serving on Der  Trumpenführer's legal team.  Later the same day John Dowd, Trump’s lead lawyer for the special counsel investigation, resigned his position in the face of Trump's signaling that he was prepared to ignore Dowd's advice and wanted a sit-down with investigators (and likely lie through his teeth).  Replacing Dowd is a yet another bombastic Fox News commentator who would be viewed as sleazy and disreputable by many reputable law firms - which means Trump will love him.

Also out yesterday was National Security Advisor Lt. Gen. H. R. McMaster who announced his exit.  Whether a mere coincidence or not, McMaster like Rex Tillerson had made strong anti-Putin/Russia statements.  Frighteningly, McMasters replacement will be the delusional and hawkish John Bolton who, if given his way, would likely get America into a war with both Iran and North Korea.    Adding to the chaos, Trump announced $80 billion in tariffs against China causing the Dow to plunge 742 points.

A column in the Washington Post suggests that what few sane people are left in the White House staff are now panicking.  Here are highlights:

As a former presidential staffer, I have little patience for leaks. . . . . Leaks are an abuse of power and position, generally by people who are unelected and self-serving.

But motivations matter, and the taxonomy of White House leakage is a worthy study. A surprising number of leaks are the result of simple vanity — the desire to appear in the know. Other leakers are trying to embarrass or sabotage a rival. Some leaks result from deviousness — the attempt to box the president in on a policy matter.

The exposure of a White House briefing document telling President Trump “DO NOT CONGRATULATE” Russia’s Vladimir Putin on his sham election victory — leaked after Trump congratulated Putin on his sham election victory — falls into a different category. It seems to have been motivated by desperation. Someone at the White House, presumably on the national security team, has taken a large personal risk to call attention to Trump’s mysteriously cozy relationship with a strategic rival. This is extraordinary — and extraordinarily frightening. In most administrations, the aides closest to the president have the greatest sense of loyalty. In this case, an aide close to the president is expressing panic. He or she cannot explain the hold that Putin has over Trump. This leak is a cry for help from within the White House itself.

The problem is Trump’s strange inability to confront Putin personally — about his oppressive rule, the disruption of America’s electoral process, human rights violations and even attempted murder on the soil of a NATO ally. Trump’s initial instinct is to explain such abuses away.

It deepens the mystery that all of Trump’s political interests push in the opposite direction. A president pulled into an investigation of improper ties to Russia might be expected to distance himself from disturbing Russian behavior. Such public criticisms are an easy and cheap form of damage control. But at every stage, Trump has been dragged kicking and screaming into the pursuit of self-interest.

Trump has not provided an adequate explanation for his radical departure from the diplomatic norm. . . . . And it is rich for Trump to accuse other presidents of lacking “smarts” about U.S.-Russian relations in the course of a foreign policy explanation at the length and level of a fortune-cookie saying.

Into this vacuum of plausible explanation have flooded other theories. “I think he is afraid of the president of Russia,” former CIA director John Brennan recently speculated. “The Russians may have something on him personally that they could always roll out and make his life more difficult.” This might seem incredible, except for the fact that Trump’s first national security adviser, Michael Flynn, was forced out over blackmail fears, and one of his principal foreign policy advisers, Jared Kushner, has been denied top secret security clearance because he might be susceptible to undue influence.

In the absence of adequate explanation from Trump himself, it is up to special counsel Robert S. Mueller III to provide clarity.

Be very, very afraid of where the country is lurching.  Trump now has, in my view, a show boating lunatic leading his legal team and second lunatic as National Security Advisor - a man who could well lead America into one or more disastrous war.   There is only one person smiling at all of this: Vladimir Putin.
Posted by Michael-in-Norfolk at Friday, March 23, 2018