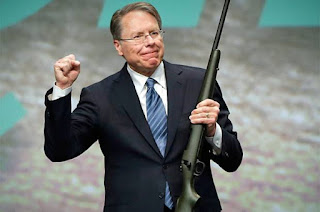 I love spy and special agent novels that feature international intrigue and bad actors in the federal government.  Now, every day news stories are being reported on happenings and questions that seem right out of such thrillers - things that once would have been thought too far fetched to be real.  As Politico is reporting, the Federal Election Commission is investigating the NRA to determine if that organization - a front for gun manufacturers - may have funned Russian funds to the Trump campaign.  In an earlier time with a different occupant in the White House, such a possibility would have seemed impossible.  Now, it seems all too possible.  Here are highlights from the piece in Politico:


The Federal Election Commission has launched a preliminary investigation into whether Russian entities gave illegal contributions to the National Rifle Association that were intended to benefit the Trump campaign during the 2016 presidential election, according to people who were notified of the probe.

The inquiry stems in part from a complaint from a liberal advocacy group, the American Democracy Legal Fund, which asked the FEC to look into media reports about links between the rifle association and Russian entities, including a banker with close ties to Russian President Vladimir Putin.
A spokesman for the NRA . . . . declined to comment on the FEC’s probe.
An FEC spokesman also declined to comment, saying the agency is prohibited by law from confirming or denying any investigations until they’re complete.
Under FEC procedures, the preliminary investigation is likely to require the NRA to turn over closely guarded internal documents and campaign finance records. Depending on what FEC investigators and lawyers find, the agency could launch a full-blown investigation, impose fines or even make criminal referrals to the Justice Department and Special Counsel Robert Mueller, people familiar with the probe said.
The preliminary investigation focuses on issues similar to those raised recently by Sen. Ron Wyden (D-Ore), the ranking member of the Senate Finance Committee, as part of his investigation into possible collusion between the NRA, the Trump campaign and Russia.
Wyden is particularly interested in whether Russian-backed entities helped the Trump campaign by funneling contributions to the gun-rights group that “inappropriately and illegally influenced our election,” according to a Feb. 2 letter Wyden sent to the NRA.
Woodhouse, a longtime Democratic Party activist, said the FEC inquiry is a significant step in getting to the bottom of a very complicated series of relationships between the NRA, the Trump campaign and Russian entities.
“This story sounds more like a Tom Clancy novel than a reality,” said Woodhouse. “But in the age of Donald Trump and possible collusion with Russia, not only is it possible that it’s true, but it’s possible enough that it needs to be fully investigated.”
The FEC . . . can look at whether or not the NRA is taking illegal foreign money to conduct political activity, and whether money is passed on to support the campaign,” Woodhouse said. “They would have to investigate all of those linkages to determine whether there was any illegal election activity.”