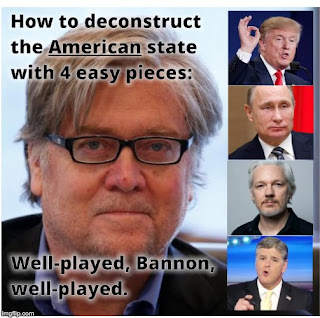 With a seemingly growing drumbeat of stories that about the Trump/Pence campaign and efforts by Trump to kill the Russiagate investigation, new information has broken about Steve Bannon's and later Jared Kushner's involvement with collection data on American citizens which would aid in targeting false and anti-Hillary Clinton propaganda information.  This data would also have been most helpful to Russian bots in their efforts to damage Hillary Clinton.  With questions growing, Cambridge Analytica has announced that it has suspended it's chief executive officer who has bragged about aiding the Trump campaign.  Obviously, if the information that Steve Bannon helped collect made it into Russian hands, the link between the Trump campaign and Vladimir Putin's intelligence agencies may be finally confirmed.  Here are excerpts from the Washington Post:

The 2014 effort was part of a high-tech form of voter persuasion touted by the company, which under Bannon identified and tested the power of anti-establishment messages that later would emerge as central themes in President Trump’s campaign speeches, according to Chris Wylie, who left the company at the end of that year.

Among the messages tested were “drain the swamp” and “deep state,” he said.

Cambridge Analytica, which worked for Trump’s 2016 campaign, is now facing questions about alleged unethical practices, including charges that the firm improperly handled the data of tens of millions of Facebook users. On Tuesday, the company’s board announced that it was suspending its chief executive, Alexander Nix, after British television released secret recordings that appeared to show him talking about entrapping political opponents.

Bannon helped launch Cambridge Analytica with the financial backing of the wealthy Mercer family as part of a broader effort to create a populist power base. Earlier this year, the Mercers cut ties with Bannon after he was quoted making incendiary comments about Trump and his family.

In an interview Tuesday with The Washington Post at his lawyer’s London office, Wylie said that Bannon — while he was a top executive at Cambridge Analytica and head of Breitbart News — was deeply involved in the company’s strategy and approved spending nearly $1 million to acquire data, including Facebook profiles, in 2014.

Bannon, who served on the company’s board, did not respond to a request for comment. He served as vice president and secretary of Cambridge Analytica from June 2014 to August 2016, when he became chief executive of Trump’s campaign, according to his publicly filed financial disclosure. In 2017, he joined Trump in the White House as his chief strategist.

Bannon received more than $125,000 in consulting fees from Cambridge Analytica in 2016 and owned “membership units” in the company worth between $1 million and $5 million, according to his financial disclosure.
Facebook has said that information was improperly shared and that it requested the deletion of the data in 2015. Cambridge Analytica officials said that they had done so, but Facebook said it received reports several days ago that the data was not deleted.

Bannon “approved the data-collection scheme we were proposing,” Wylie said. The Mercers did not respond to a request for comment.

The data and analyses that Cambridge Analytica generated in this time provided discoveries that would later form the emotionally charged core of Trump’s presidential platform, said Wylie, whose disclosures in news reports over the past several days have rocked both his onetime employer and Facebook.

The year before Trump announced his presidential bid, the data firm already had found a high level of alienation among young, white Americans with a conservative bent.
The controversy over Cambridge Analytica’s data collection erupted in recent days amid news reports that an app created by a Cambridge University psychologist, Aleksandr Kogan, accessed extensive personal data of 50 million Facebook users.
Facebook’s policy, which has since changed, allowed Kogan to also collect data —including names, home towns, religious affiliations and likes — on all of the Facebook “friends” of those users. Kogan shared that data with Cambridge Analytica for its growing database on American voters.

Facebook on Friday banned the parent company of Cambridge Analytica, Kogan and Wylie for improperly sharing that data.

The Federal Trade Commission has opened an investigation into Facebook to determine whether the social media platform violated a 2011 consent decree governing its privacy policies when it allowed the data collection. And Wylie plans to testify to Democrats on the House Intelligence Committee as part of their investigation of Russian interference in the election, including possible ties to the Trump campaign.
Meanwhile, Britain’s Channel 4 News aired a video Tuesday in which Nix was shown boasting about his work for Trump. He seemed to highlight his firm’s secrecy, at one point stressing the need to set up a special email account that self-destructs all messages so that “there’s no evidence, there’s no paper trail, there’s nothing.”
After Cruz faded, the Mercers switched their allegiance to Trump and pitched their services to Trump’s digital director, Brad Parscale. The company’s hiring was approved by Trump’s son-in-law, Jared Kushner, who was informally helping to manage the campaign with a focus on digital strategy.

Kushner said in an interview with Forbes magazine that the campaign “found that Facebook and digital targeting were the most effective ways to reach the audiences. . . .We brought in Cambridge Analytica.” Kushner said he “built” a data hub for the campaign “which nobody knew about, until towards the end.”

Kushner’s spokesman and lawyer both declined to comment Tuesday.

Posted by Michael-in-Norfolk at Wednesday, March 21, 2018