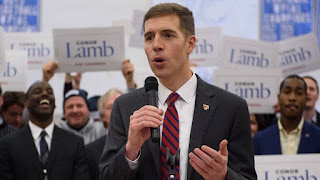 With progressives energized and basically anyone other than white supremacists, Christian extremists and greed driven vulture capitalists coming to the conclusion that Trump/Pence and the larger Republican Party are a cancer on the nation, Democrats have a golden opportunity to win in a wave come November, 2018.  To do so, they need to run good candidates, run organized and interlinked ground games to get voters to the polls and avoid going to far to the left.  Sadly, many liberal activists do not grasp the reality that winning and defeating Republicans, not electing the most ideologically pure candidate, is the goal.  Ralph Northam in Virginia and Conor Lamb in Pennsylvania show the strategy that Democrats need to replicate over and over again.   Whether or not far left liberals will get their heads out of the asses is the big question.  A piece in New York Magazine lays out what Democrats ought to do.  Here are article highlights:

Democrats need to win two dozen Republican seats to gain a House majority. Approximately 118 districts have more Democratic-leaning electorates than the 18th district of Pennsylvania, which voted for Donald Trump by nearly 20 points, and which Democrat Conor Lamb turned into a competitive race. Several days before the election, Republicans were already spreading the word that the discouraging outcome would be the idiosyncratic result of the unusual candidates on the ballot.

Republican candidate Rick Saccone was not an especially weak nominee, having won several races in competitive environments before. . . . . It is also true that Conor Lamb was an especially strong candidate: Young and lacking a voting record to be picked apart, with a background as a Marine, Lamb cut a favorable profile in comparison with the lifelong politician he faced.

And there are a lot of Conor Lambs out there. Very early in the election cycle, Democrats recruited candidates with nontraditional backgrounds, especially in the military, who would appeal to voters in red districts.  “A rough profile of [Democrats’] ideal candidate has started to emerge: veterans, preferably with small business experience too,” reported Politico last April. . . . . The next month, Axios reported that Republicans were already worried about “Democrats recruiting unusually high-quality House candidates for the 2018 midterms.”

Recruiting veterans is an effective strategy for overcoming the Republican tilt of the House map, which requires Democrats to contest deeply conservative territory in an attempt to gain a majority. Republicans have used ethnonationalist themes for decades to sell voters on an unpopular economic agenda: Election messaging is all American flags, crime, and being tough on terrorism, while the policy agenda is about lax business regulation and regressive tax-cutting.

This disconnect between politics and policy is Republicans’ weakest point. Their strategy can be hacked. . . . . A candidate with a compelling biography — especially those with a military background — can disarm these attacks pretty easily. It is not a panacea, but a major advantage nonetheless.

[O]ne of the ways in which Democrats benefitted from the massive counter-mobilization that formed immediately after the 2016 election is an unusually high number of people willing to rearrange their lives around the goal of saving their country from an unfit president. In many cases, the possibly corny and self-serving narrative of the “military veteran called to serve their country once again” actually applies. Democrats have more or less unanimously regarded a Trump presidency and a pliant Republican Congress as a national emergency.

The unusual success Lamb showed in running a competitive race in Trump country is not a total fluke, but rather proof of concept for a strategy that could replicate itself across the country.

Bernie Sanders and Elizabeth Warren both sought to block Northam's nomination - a fact that means I will NEVER vote for either of them if the opportunity arises - in favor of a false leftist.  Had they succeeded, a Republican would now likely be in the Governor's mansion in Richmond. Had similar urges prevailed in Pennsylvania's 18th District, a Republican would have won there as well.  Democrats need to embrace this reality and back candidates accordingly.
Posted by Michael-in-Norfolk at Monday, March 19, 2018