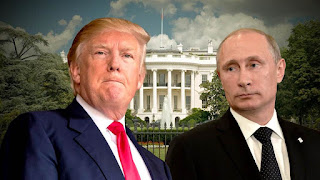 As the husband and I an friends enjoy our stay in Key West - a city's with a motto of "All One Human Family" - it is difficult to not feel that perhaps we are witnessing the death of American democracy as the utterly foul occupant of the White House does all in his power to stop an investigation likely to expose both his criminality and treason.  Sadly, too many seem to be paying nowhere near enough attention to the daily parade of lies and efforts to end the rule of law and the concept that no one is above the law.  Trump's mode of operation increasingly seems modeled on that of Putin and other despots.  A a piece in the New Yorker looks at Trump's ongoing effort to destroy the rule of law.  Something that ought to distress every patriotic American. That latter category, of course excludes Trump's base and evangelical Christians, perhaps the most morally bankrupt people in America, if not the world.  Here are article excerpts:

If you wanted to tell the story of an entire Presidency in a single tweet, you could try the one that President Trump posted after Attorney General Jeff Sessions fired Andrew McCabe, the deputy director of the F.B.I., on Friday night.

The President has crusaded for months against McCabe, who is a crucial corroborating witness to Trump’s attempts to stymie the F.B.I.’s investigation of his campaign’s ties to Russia.

McCabe behaved with the dignity and the ethics consistent with decades of distinguished service in law enforcement. He played by the rules. He honored his badge as a special agent. But his service threatened the President—both because of the past exoneration of Clinton and the incrimination of Trump, and for that, in our current environment, he had to be punished. Trump’s instrument in stifling McCabe was the President’s hapless Attorney General, who has been demeaning himself in various ways to try to save his own job.

After McCabe was dismissed, on Friday night, he said in a statement that the “investigation has focused on information I chose to share with a reporter through my public affairs officer and a legal counselor. As Deputy Director, I was one of only a few people who had the authority to do that. It was not a secret, it took place over several days, and others, including the Director, were aware of the interaction with the reporter. It was the type of exchange with the media that the Deputy Director oversees several times per week.” The idea that this alleged misdeed justifies such vindictive action against a distinguished public servant is laughable.

In his statement, McCabe spoke with bracing directness. “Here is the reality: I am being singled out and treated this way because of the role I played, the actions I took, and the events I witnessed in the aftermath of the firing of James Comey,” he said. In other words, McCabe was fired because he is a crucial witness in the investigation led by Robert Mueller . . .

What’s clear, though, is the depth of the President’s determination to prevent Mueller from taking his inquiries to their conclusion, as his personal attorney, John Dowd, made clear. . . . Rosenstein is on notice that his failure to fire Mueller might lead to his own departure. And Sessions, too, must know that his craven act in firing McCabe will guarantee him nothing. Trump believes that loyalty goes only one way; the Attorney General may still be fired at any moment.

Sessions could be replaced with someone already confirmed by the Senate—perhaps Scott Pruitt, the administrator of the E.P.A.—who could take office in an acting capacity. At the moment, Mueller’s investigation is supervised by Rosenstein, the deputy Attorney General, but presumably a new Attorney General, without Sessions’s conflict of interest, would take over that role. And that new Attorney General could fire Mueller. Such scenarios once seemed like the stuff of conspiracy theories. Now they look like the stuff of tomorrow’s news.

[T]his is far from a great day for the men and women of the F.B.I., who now know that they serve at the sufferance of unethical men who think that telling the truth amounts to “sanctimony.” The lies in this story are about the F.B.I., not from the F.B.I. The firing of McCabe, and Trump’s reaction to it, has moved even such ordinarily restrained figures as John O. Brennan, the former director of Central Intelligence, to remarkable heights of outrage:  . . . . When the full extent of your venality, moral turpitude, and political corruption becomes known, you will take your rightful place as a disgraced demagogue in the dustbin of history. You may scapegoat Andy McCabe, but you will not destroy America...America will triumph over you.

The haunting question, still very much unresolved, is whether Brennan’s confidence in America’s ultimate triumph is justified.